Gold legends Tiger Woods and Phil Mickelson will play a much anticipated $9 million winner-take-all match at Shadow Creek Golf Course in Las Vegas on Friday, And, yes, you can bet on the spectacle. 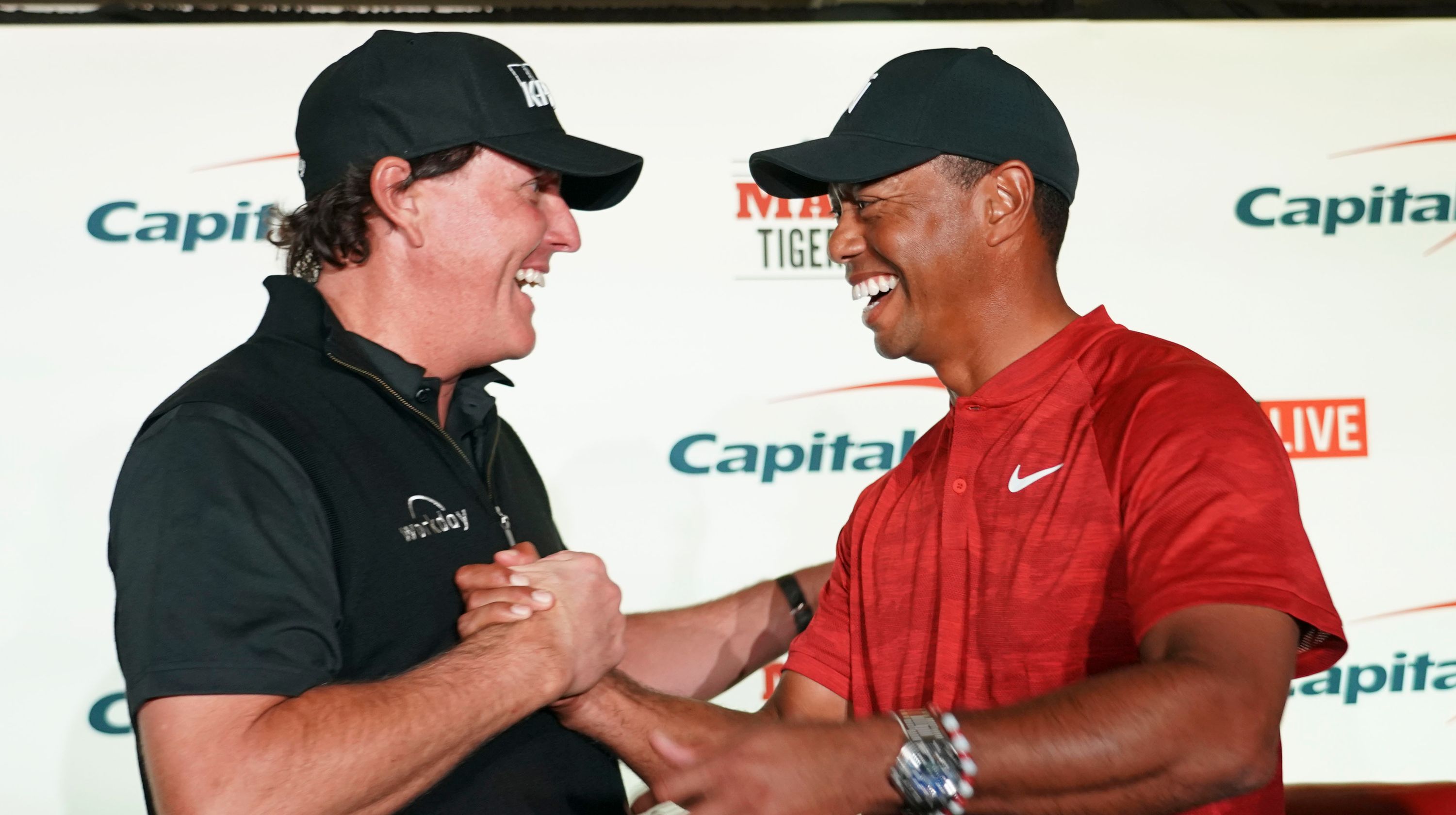 Phil Mickelson and Tiger Woods are going to play Friday for $9 million in what might be the most anticipated golf match ever. (Image: gannett-cdn.com)

As expected, Tiger is heavily favored (-220) while “Lefty” is the underdog (+170). The competitors already have a $200,000 side bet. Don’t be surprised if the golfers up the ante even further during the match.

Most golf analysts predict Woods will win. CBS Sports Writer Kyle Porter worries the match could end in “12 or 13 holes” because “Tiger is just a much better golfer than Phil right now.” That would be a disappointment to the fans paying $19.99 to watch on Pay-Per-View.

The match play format doesn’t guarantee a full 18 holes of golf. A golfer’s overall round score is meaningless. In match play the game is played by holes not strokes. A hole is won by the side that holes its ball in the fewest strokes.

So, if a player triple bogeys a hole and the other player gets a birdie, the scoring difference is just one as opposed to the three-stroke difference in standard PGA Tour events. Match play is beneficial to a talented golfer who is prone to the occasional triple bogey meltdown.

But it can create a quick match which might be disappointing to viewers. If one golfer is mathematically eliminated before the completion of 18 holes, the contest concludes early.

Why Tiger Woods is Favored

Tiger, 42, is six years younger than an aging Phil Mickelson. That should work in his favor on Friday, at least the handicappers believe.

These long-time rivals have more at stake than just the possibility of winning $9 million. For “Lefty,” getting over on Woods, the golfer he couldn’t beat for years, would be icing on the cake of his brilliant career.

And for Tiger, this might be one of his last opportunities to send another dagger in Mickelson’s heart.

Age isn’t the only reason Woods is favored. The 14-time major winner is playing his best golf in years. He finished second at the PGA Championship in August and sixth at the Open Championship in July. In both events, he was in contention on the final round’s back-nine.

Mickelson, on the other, hasn’t been competitive in majors recently.

You can bet on more than just the winner. Vegas and online sportsbooks offer numerous prop bets for Friday’s Tiger versus Phil match.

One of those prop bets is which player will have the most birdies. Mickelson (-120) is actually surprisingly favored on this wager over Tiger (-110). You can even bet on if either player will hit a hole in one (+550).

When will the match conclude?

Great, that´s a good and difficult bet to know when Tiger Woods will win. But the other golfer might come with surprise, you never know, every day is a new chance…

Got the pass to tonight’s tournament, thanks.