PokerStars, its casinos, and sportsbooks in the United States slowly came back online Tuesday after going down Friday afternoon for “unscheduled maintenance.” 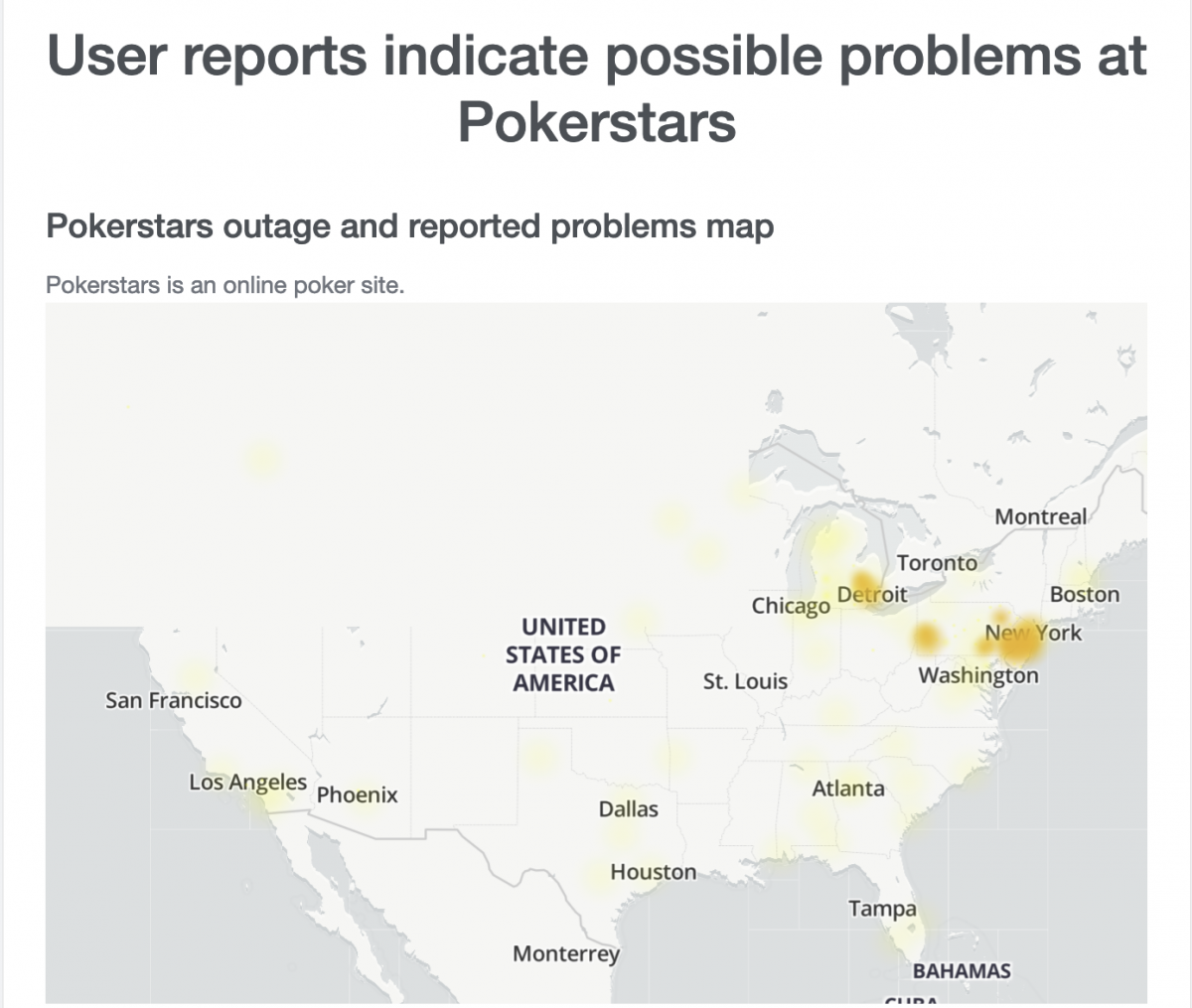 This heat map shows where PokerStars users reported outages over the past 24 hours. (Image: Downdetector)

Eddie Motl, Vice President of Communications and marketing for Fox Bet is assuring users that, despite the inconvenience, all accounts are secure and were never in danger.

“The biggest concern that we want to make clear to customers is this is not any kind of data breach or a cyber security issue. All accounts are safe,” Motl told CardsChat.

The PokerStarsUSA Twitter account spent the last three days denying any type of “breach” took place, but that didn’t stop users from speculating that something nefarious had happened.

Motl said the problem sprung up internally and had nothing to do with a DDoS attack, ransomware, or anything criminal. But he couldn’t say more. “Frankly, there’s not a lot that I can share, only to say that it’s an unscheduled maintenance issue,” he said. “I’m not able to give more details.”

Douglas Harbach, a media representative for the Pennsylvania Gaming Control Board, wrote via email that geolocation issues were to blame for knocking the online gambling suites offline. He couldn’t answer follow-up questions.

Motl wouldn’t confirm if geolocation was the issue, though PokerStars did have a previous geolocation problem that prevented Pennsylvania players using Apple MacBook computers with newer chips from accessing the site this fall. It took the site about two months to solve.

A media representative for the Michigan Gaming Control Board said the board declines to comment.

CardsChat reached out to GeoComply, the company tasked to make sure users are located in the three states, but hasn’t heard back as of publication.  That also holds true for the Division of Gaming Enforcement in New Jersey.


Users left in the dark

Besides a series of Tweets from both PokerStarsUSA and its sister account, FOX Bet Care, no information was shared publicly with the players who were left wondering why the site was down for days.

When users logged onto PokerStars, they saw only the apology for the site’s “unscheduled maintenance.” No emails were sent explaining what was going on, and no live customer service is available to these users. When contacted via the support form, players received the same message: “We are currently under maintenance and are working to restore our services.”

PokerStars’ lack of transparency didn’t sit well with its customers, who expressed their frustrations on Twitter.

This is absurd. You're not even attempting to communicate with your customers. You're destroying your business. Who will trust you going forward?

PokerStars’ parent company, Flutter Entertainment, is one of the world’s largest gaming companies and is worth approximately $25 billion.