Poker Central will soon have its own 10,000-square-foot broadcast studio where up to 300 fans can watch live PokerGo subscription events, as well as esports. The studio — which officially opens to the public May 16 with a Poker After Dark kickoff production — will be custom-built and located outside the Aria on the Las Vegas Strip. 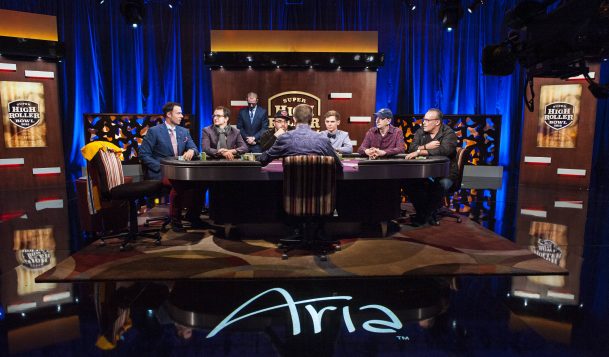 On May 27, the new PokerGO Studio will play host to the fourth annual Super High Roller Bowl, a $300,000 buy-in tournament that will air live on the PokerGO app. Last month, Aria hosted a live lottery to determine the first 30 of 48 participants in this event. The ritzy casino will soon select the remaining 18 players.

Days later, PokerGO will bring its cameras over to the Rio to livestream many WSOP final tables for the second consecutive year. The poker app will also partner with ESPN to broadcast the Main Event live in July.

The PokerGO Studio, located among a row of retail shops in front of Aria, will be open to the public during select live events. The studio will include multiple sound stages, a break desk, and a streaming lounge.

There will be enough space to fit 100 viewers during livestreamed events, with a maximum capacity of 300.

Poker and esports share synergy, as many poker players have made the crossover to the world of competitive gaming. Pros such as Bertrand “ElkY” Grospellier have even joined competitive esports teams.

When Poker Central debuted the Super High Roller Bowl in 2015, the poker network’s first piece of original content, no one really knew what the future held for the start-up company.

After three years of operation — which included a switch in focus from the 24/7 free app to a subscription-based on-demand app (PokerGO) — Cary Katz’ Poker Central appears to be thriving, although viewership figures haven’t been publicly released.

Poker Central has continually added original programming, such as the Poker Masters and US Poker Open, and brought back an old poker fan favorite, “Poker After Dark.” The media company has partnership deals with ESPN and NBC.

And now, after three years, Poker Central finally has a permanent home.

This is amazing! Can not wait to see the biggest fishes at high-stakes poker. Amazing boost from PokerGO, I love this application. Also this might be the way how to bring more people to poker communities. Televison is really powerfull weapon just need know how to use it. 😉

It is very intreresting to watch live poker events, and especially final tables of big buy-ins games right in front of you. The app is also very good because too many people will be able to watch it, even from far away. Of course I would like more, to be one of the players!