Hustler Casino Live continues to make huge waves in the world of poker streaming, as they set a number of personal records last night, with a stream that started early in the evening on Friday, and went to the wee hours of the morning on Saturday. 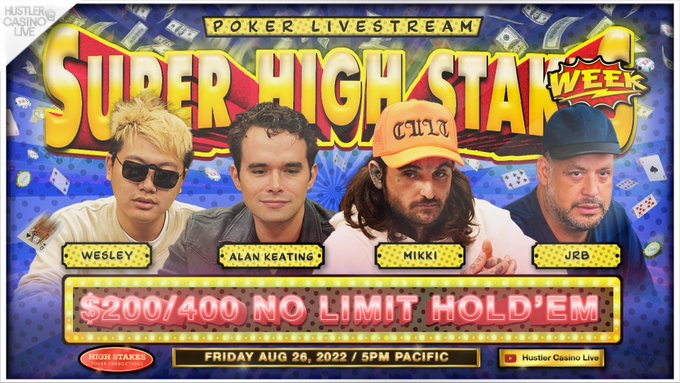 The stars of the $200/400 game that caused waves throughout the poker twitter world. (Image: Twitter/Hustler Casino Live)

The No-Limit Hold’em game was the largest ever run on the Hustler Casino Live show in Gardena, CA, with massive blinds of $200/$400 with an optional $800 straddle from the under-the-gun player. Each player was required to buy-in for at least $100,000, and at one point, there was over $4 million on the table.

History was made last night/this morning

Largest stack ever (JRB & Keating both over $1M)

Thanks to everyone involved!!

The biggest highlight of the night was a pot that nearly saw three-quarters of a million dollars go into the middle. The winner of the hand was the aforementioned Alex Keating, who bet each street on his way to rivering the nut straight, which also gave his opponent JR two pair. The whole hand can be viewed below.

We just had our BIGGEST POT IN HCL HISTORY!! $749,000!!!@Mister_Keating rivers the nut straight and gets max value

Despite not being part of that pot, Jean-Robert Bellande, a poker pro who is better known for his big losses than his big wins, actually set another Hustler Casino Live record when he cashed out with a profit of over $800,000. At his peak on the night, he was nearly up $1 million. A good chunk of his winnings came in a nearly $500,000 chip pot that was all in preflop, where Bellande held Ace-King against the pocket kings of Hicks. They agreed to run it twice, and Bellande would river an ace on the first board, and river a broadway straight on the second board. 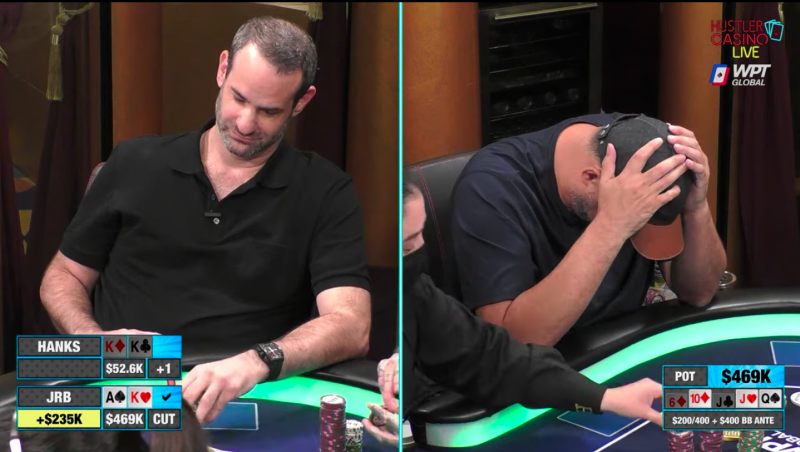 Jean-Robert Bellande (right) in disbelief as he sucks out twice in $470,000 pot against his opponent Hanks. (Image: YouTube/HCL)

One record that was not broken last night was the biggest loss on record. That once again belongs to Alex Keating, who lost $1.1 million in the massive Twitch streamers shows Hustler ran in late April.

On the first night that the two shows went head to head, Live at the Bike pulled an abysmal 600 concurrent viewer peak, while Hustler Casino was all the way up at 13,000 on its peak. While the Live at the Bike numbers did increase slightly over the week, they never came close to the five-figure concurrent numbers that Hustler Casino Live pulled in. Some viewers were still critical of the new Live at the Bike studio, despite another recent round of renovations to the room that was funded by their new owners, Ballys Entertainment.

These numbers likely made the historic stream extra special for producer Ryan Feldman, who had a public falling out at Live at the Bike during the Covid-19 pandemic break.

Huge thank you to everyone involved — the players, production staff, etc

Not sure if I should celebrate, laugh or cry, but first I’m gonna try to sleep

How did we do that? https://t.co/LVqZbVXcfy

The historic stream ran for over 15 hours, and wrapped up at around 9 AM local time. The highly successful streaming show continues to bring some much-needed legitimacy to the Hustler Casino, which was in the news for all the wrong reasons a few weeks ago.

First, the casino made the controversial decision to cancel their $250,000 Guaranteed Event after two full days of starting sessions had been played. Feldman and fellow HCL creator Nick Vertucci stepped in and took measures to try to make things right with players. Then, later that week, two guards were injured in a robbery attempt of an armored truck.