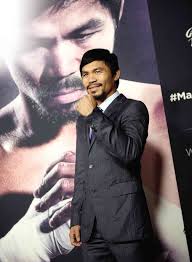 Boxing phenom Manny Pacquiao dominates in the ring, but shows that he can fold to a $100,000 bluff. (Image:nydailynews.com).

Boxing legend Manny “Pacman” Pacquiao can truthfully say that only a handful of people have gotten the best of him in the ring, but when it comes to high stakes no-limit holdem ring games, the 36 year old boxing sensation from the Philippines is somewhat more likely to meet his match.

According to high stakes cash-game specialist Justin “Boosted J” Smith, that’s precisely what happened when Pacquiao sat down in a ring game where the poker pro was seated.

The scenario played out much like the scene from Rounders, in which main character Mike McDermott (Matt Damon) bluffs two-time WSOP Main Event champion Johnny Chan, who folds and asks “Did you have it?”

There is one dangerous exception in the real life scene though: unlike Chan, Manny Pacquiao is a feared champion boxer, to whom Justin Smith dared to show his hand after a six-figure bluff.

Justin revealed the details of his poker war story on Instagram, after indicating that he looked forward to the premier of “Manny”, a documentary about the famed boxing superstar. Gather ’round:

“One day, Manny and I were playing poker for the first time ever together. I ran one of the most aggressive bluffs ever in my career against him and I bet over $100k on the river, he thought for almost five minutes, and finally showed me that he had folded top pair of aces. He started to beg me to show him my hand. I had one of the most nothing possible hands I’ve ever ended up having, but I had a read on him and decided to go with it.

Naturally, I don’t usually like to show my hands, and didn’t want to rub it in his face that I had outplayed or ‘fooled’ him. I also didn’t want to make him upset since he was asking me to do something. So, I asked him three times ‘are you sure you want to see my hand?’ And he nodded his head energetically and saying yes while anticipating me to show my cards. I showed him an absolute stone cold bluff and when his eyes compared my cards to the board to find the correlation that didn’t exist, his eyes darted back up to meet my eyes and his fists clenched up.” -poker player Justin “Boosted J” Smith

What happened next shouldn’t come as a surprise to those who’ve tangled with “Pacman” Pacquiao in the boxing ring.

“[Manny] abruptly stood up and charged walking over to me, I stood up, and he started roaring with laughter and shook my hand and gave me a back pat hug. He respected the move I had made because he loves competitiveness.”

Justin went on to tell the story within the story, about Manny’s “relaxed and cool” smile under pressure, and his ability to awe and inspire those in his presence.

In a situation where some of poker’s best might throw a tantrum, or even a handful of chips, Manny Pacquiao took the high road and made a new friend of an opponent with $100,000 worth of courage to bluff a boxing legend.

It was a risky move that apparently paid off in many ways for Justin Smith, who was thankful for the rare chance to play the villain to a boxing hero.

Emmanuel Dapidran Pacquiao has won ten world boxing titles, and is the world’s only eight-division boxing champion. A man of many talents, Pacquiao is also an actor, singer, basketball player and coach, and is a member of the Philippine House of Representatives.

Manny is an avid poker player and partnered with the Asian Poker Tour in 2011 to host the Manny Pacquiao World Poker Event, a six-day tournament series held at the Pan Pacific Hotel’s Asia Poker Sports Club in Malate, Philippines.

Entitled “Manny”, a documentary of Pacquiao’s boxing career is available in select theaters, and on demand via Amazon and Google Play.

If Floyd thinks that he had outwitted Pacquiao and the whole boxing world, he is in for a rude awakening. A fool’s laughter is cut short by an avalanche of unintended consequences. In Floyd’s sociopathic world, there is one one main character and the rest are puppets. Hence, he feels invincible, accountable to no one, everyone has a price, and he is above the law. I truly hope that CBS would file a huge lawsuit against Floyd and Al Haymon. It’s time to boycott Floyd and Haymon’s fights. The power is with us, not with these thugs who have robbed us blind.

I don’t see how the above comment has anything to do with this article. That being said, I give mad propers to Boosted J for making that huge bluff, then showing it, and THEN standing up to the champ just in case he really was gonna get ko’d.

I love that true champions are just as good at losing as they are winning. Well done Paquiao.