They haven’t been to the World Series of Poker yet this year, but poker fans will be able to watch Phil Ivey and Tom Dwan play high-stakes poker on the Hustler Casino Live stream on YouTube this weekend. 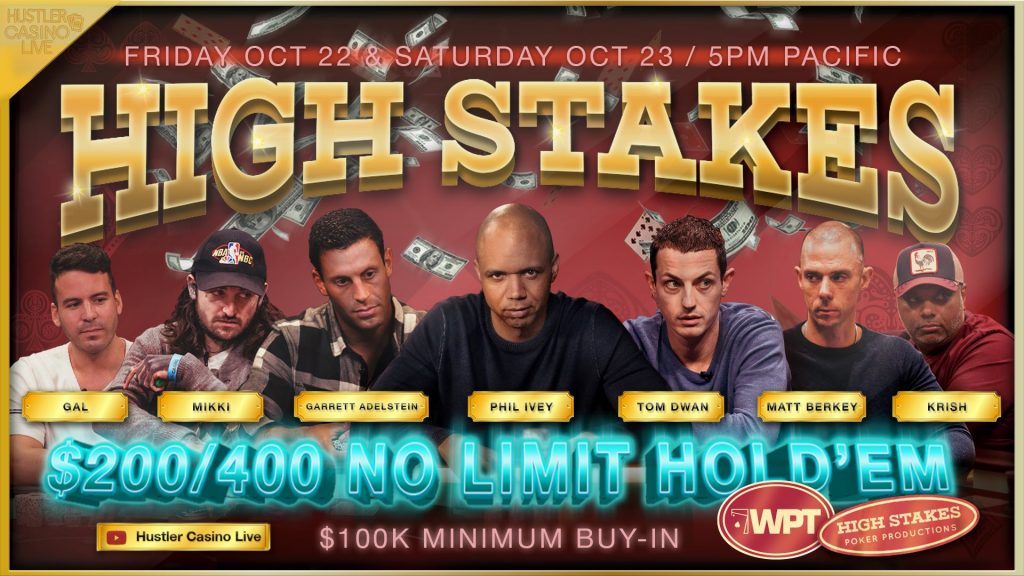 “Its going to be amazing. It’s going to be sick. It’s pretty surreal. We’ve kind of taken over, to a degree, the poker live streaming world so quick,” said Ryan Feldman, producer of Hustler Casino Live. “I think it’s going to shatter any sort of viewer record in any live stream I’ve been involved in.”

Two of the most enigmatic and talented high-stakes poker players in the world, Ivey and Dwan have a history of battling in front of the cameras, including a $1.1 million pot played on Season Four of the Million Dollar Cash Game in 2009 when Ivey turned the bad end of a straight with A 2 against Dwan’s 6 7.

What, you guys couldn’t get Stuey Ungar? https://t.co/q69qU5Ivrb

While Phil Hellmuth is doing his best to add to his record 16 WSOP bracelets and pad his lead over Ivey, Doyle Brunson, and Johnny Chan who share second place with 10 each, Ivey appears to be looking for green instead of gold, as he’s been noticeably absent from the WSOP this year.

Dwan, too, hasn’t been seen around the Rio this year, though he and Hellmuth did recently face off on PokerGo’s High Stakes Duel where players challenge each other heads-up and play for a potential $12.8 million payoff. He beat Hellmuth in the latest episode for $200K.

Other players taking seats at tonight’s game from the Hustler include professional poker players Garrett Adelstein, Matt Berkey, and Gal Yifrach, along with two LA-area high-stakes regulars known as Mikki and Krish.

Yifrach is coming in hot after finishing third in the WSOP $50K High Roller event just last night for $495,305. It was his third cash of the 2021 WSOP and his 30th overall.

Berkley has more than $4 million live tournament winnings and is the founder of  the poker school Solve For Why.

When Cardschat talked to Feldman last month about the new poker stream he and Nick Vertucci produce for Hustler Casino in Gardena, California, Ivey and Dwan were the first players he mentioned when asked who would be included at his dream table.

Feldman and his crew used to build games for Live at the Bike! before launching the relatively new Hustler Casino Live, which has quickly become one of the must-view poker streams on YouTube.

The game is generally spread from Monday through Friday and is shown with hole cards and commentary. Since it launch this past summer, Hustler Casino Live has featured some of poker’s best rounders, including Antonio Esfandiari, Mike Matusow, Danielle Andersen, as well as former NBA players and poker afficiandos Paul Pierce and Gilbert Arenas.

Aside from the compelling player lineups he’s been able to secure, Feldman says the live stream’s production value is the best in the business thanks to a $400K set and production room approved by Larry Flynt shortly before his passing.

As a result, every player at the table is miked up and the production team has multiple cameras rolling at all times, so there’s no danger of missing any of the action.

And the action has been crazy. Just a week ago, the game had more than $1 million on the table. We can only guess as to how much money will be in play this weekend.

The stream begins at 5 p.m. PT and can be found here.