The new online live poker show, launched Aug. 3, instantly took its spot next to the world’s first live poker streaming broadcast Live at the Bike as the place where famous poker players and action junkies in Los Angeles want to show off on camera. The YouTube stream is on its way to amassing 10s-of-thousands of subscribers. 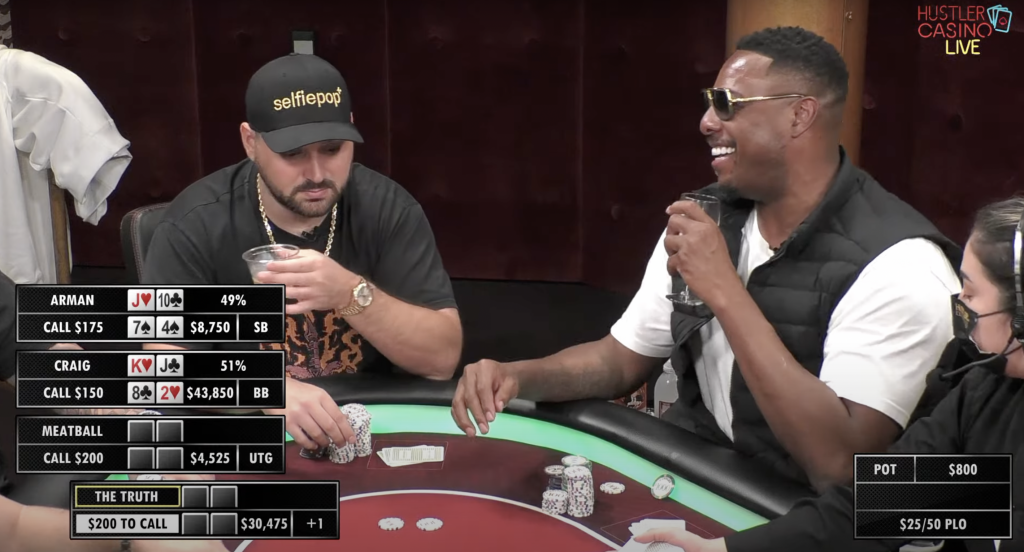 “We’re pretty stoked with how successful it’s been so far in a short period of time,” says Ryan Feldman, who along with Nick Vertucci, produces Hustler Casino Live. “We had a vision going in and we had some hopes for how long things would take before seeing certain levels of success, and I would say we are definitely exceeding our own expectations so far, which is hard to do because we had very high expectations going in.”

The success may seem instant, but Feldman and Vertucci worked to partner with a casino and get the show on the Internet for more than two years.

Feldman met Vertucci while working on Live at The Bike in 2017. Vertucci was a regular in the Friday night high-stakes matches, and they quickly became friends. After learning that Feldman wasn’t completely happy working for Live at the Bike, he suggested they team up and make a stream themselves.

They formed a production company, called it High Stakes Poker Productions, and began meeting with casinos around LA in 2019. After coming close to making deals with a few of them, the pandemic nuked everything until the summer of 2020, when Shaun Yaple, general manager of Hustler Casino, reached out to Feldman via Twitter.

“I wanted to do this. I didn’t know how to go about it. I’ve been trying to put together some type of streams since late 2019. Meeting Ryan and Nick, they’re the kind of people you want to work with. The cool thing about this relationship is, everything we said we would do for both parties has come true. And so far it’s been kicking ass,” Yaple says.

Yaple wanted to expand his marketing out of the traditional channels of billboards, TV, and radio spots. The money used to produced Hustler Casino Live comes out of his marketing budget.  “We’re just trying to change the way to market the casino and I thought a live stream would be the most efficient way to do that,” Yaple says.

A contract was signed in November of 2020. So far, Yaple couldn’t be more pleased. “I already had more people in the poker room the last two weeks that haven’t even heard of Hustler until the live stream and now they’re playing in the room,” he says.

Feldman says they can’t ask for a better partner.

“The casino’s been amazing and that’s been a huge part of it, how much Hustler Casino cares about the stream being successful. I can’t imagine any other casino putting as much into it as Hustler has. We are really thrilled at how great they’ve been as partners. Shaun and the management team are so cool and they just really get it.”

A match made at Hustler

Larry Flynt, who said his first life dream was to own a casino, bought the El Dorado Club in 1998, razed it, and opened the Hustler Casino in 2000. He moved his high-stakes, seven-card stud home game there and would play right on the casino floor with genuine poker legends.

Barry Greenstein, Phil Ivey, Chip Reese, Doyle Brunson, and many others all made their way to Hustler Casino to play with the man.  When Yaple became the GM in 2019, Flynt said he wanted more “white chip” poker games, but he didn’t want to pay players to sit in these games. Yaple suggested a live poker stream would bring them in and Flynt was on board.

After connecting with Feldman and Vertucci, and coming up with a plan, Yaple, who got his start as a poker dealer, drove to Flynt’s mansion prepared to give a 45 minute presentation. But when he got there, he noticed Flynt wasn’t feeling very well, so he cut it short. Way short.

After a 45 second pitch, Flynt approved the $400,000 budget, telling Yaple that he would be very impressed if he pulled this off.

“When we agreed to do the deal with Ryan and Nick, we had to come up with a concept that he would like. He’s very grandiose. So we had to nail this design and nail this pitch down,” says Yaple. “With Mr. Flynt, you never really knew where his questions would go. We were very prepared and gave him lots of options and, of course, he went with the most expensive one.”

“Going for the jugular”

That $400,000 bought a gorgeous set, a control room, and billboards all around southern California featuring players who would play on the stream.

This summer, the production team ran rehearsal after rehearsal in order to make sure the show came out of the gate looking as polished and professional as possible. The first broadcast was delayed several times as they worked out the kinks. 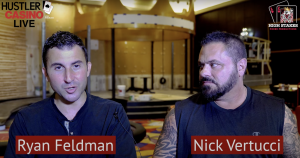 “We really want to dominate all the other live streams out there. We want to be clear that we are the best live steam in this space,” he said.

He’s trying to achieve this by bringing in some of the world’s most intriguing poker players and people, and through high production value. The cameras are top-notch. Each player has their own microphone (which needs to be switched on and off as they, say, run to the bathroom). High Stakes Poker Productions has its own sound and graphics people. They often have pre-recorded spots ready to be rolled during the live broadcasts.

It’s on par with some of the best poker shows on TV, and players around LA — and beyond — have taken notice. Feldman is now in the position where he has to turn away players, but that’s what happens when people like Paul Pierce and Gilbert Arenas call to say they want to play on your stream.

Feldman does his best to seat players who will provide good action, insightful poker conversation, and who are also able to reveal themselves in the pressure cooker that can be the poker table, and he has an ambitious list of dream players and stars he’s love to bring in.

Phil Ivey and Tom Dwan, who he calls “the pinnacles of poker, they’re like Jordan and Lebron,” are on the top of his list. He says Phil Hellmuth will definitely play on the stream, and he’s hoping Daniel Negreanu will eventually stop by.  As far as stars outside of poker? Kevin Hart “would be a dream.” Bruno Mars, a regular in LA-area home games is also on that list, along with Steph Curry.

Star power isn’t the only thing Feldman considers when deciding who gets to play on Hustler Casino Live. According to him, the ideal mid-stakes game is filled with players who are willing to see a lot of pots and who are sitting next to players who love to drive the action.

“Also, I just look for people that are great characters, that have good personalities, that talk when they’re on stream, that talk when they’re in a big hand, that laugh and will have fun. We’re looking for entertainment. We’re looking for those mixes of people. We want camaraderie, we want people who get along and have fun together. We look for rivalries and are willing to battle with each other. That’s important too.”

The Hustler Casino Live game streams Monday through Friday starting at 5 p.m. PT. A big buy-in game is spread on Fridays, while the rest of the week is usually dedicated to middle stakes. The stream allows people to comment and chat, and it gets lively.

Overall, Feldman is optimistic about the future of the stream. “We’re only getting started. We have big plans going forward with some of the players we’re trying to get. We’re going for the jugular. We’re trying to really get everybody. The biggest names in poker, we want them to be on the show, and we’ll do whatever it takes to get them.”