A humble and grateful Phil Hellmuth accepted his 16th bracelet in a ceremony at the Rio on Sunday night with a short speech that marked a lifetime goal for the WSOP’s all-time bracelet record holder. 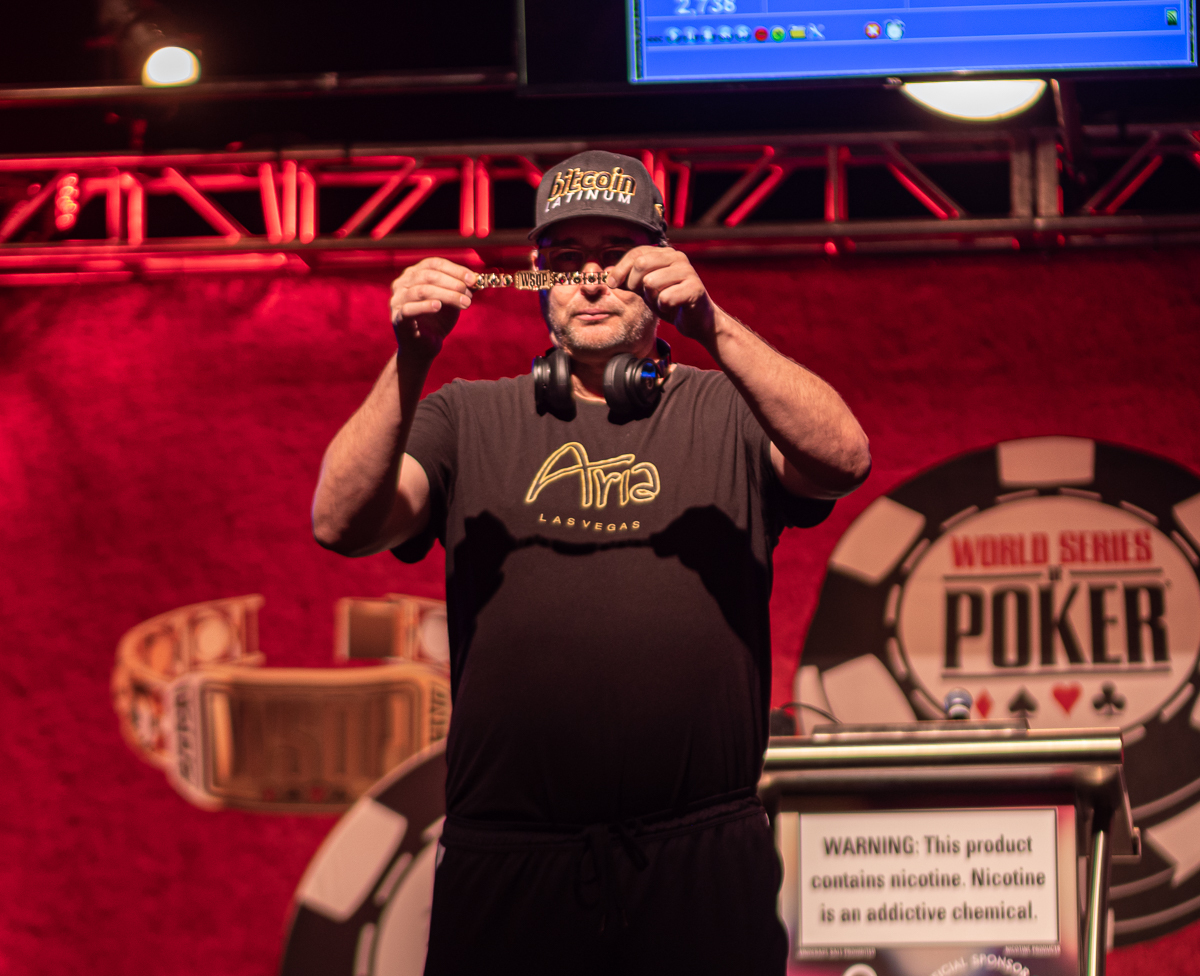 Since Hellmuth was in his early 20s and just starting his WSOP adventure, he considered winning a No-Limit 2-7 event a sign of poker greatness, he said.

It’s a bracelet that’s eluded him several times, starting in 1993, when he finished as runner-up to Billy Baxter, who he called “the all-time great.” That final table included Bob Stupak and six-time bracelet winner T.J. Cloutier. Stupak’s only bracelet came in a 1989 2-7 event when he beat Baxter heads-up.

Hellmuth checked winning a WSOP No-Limit 2-7 bracelet off his poker to-do list when he beat Jake Schwartz heads-up for $84,951.

WSOP VP Jack Effel introduced Hellmuth to cheers and applause at the bracelet ceremony, joking that whether you love him or hate him, he plays to win on and off the felt. “He’s always spreading positivity unless, of course, his opponent spikes a one out,” Effel teased.

In awarding Hellmuth his most recent bracelet, Effel turned a little more serious about the WSOP’s most-awarded player.

Upon accepting bracelet 16, Hellmuth poked a little fun at himself over a profanity-laden blowup aimed at Anthony Zinno in last week’s $10K Stud tournament.

“I don’t know what you’re talking about, I’m 100% positivity. I mean, it was just a little swearing rant, tirade that I did. No big deal, Jack.”


After his moment of levity, Hellmuth too turned serious about the incident, and how it was received by his friends, family, and fellow poker pros.

“No, no, no, I felt really bad about that and my parents were mad at me. My wife, she’s been at a spa, she didn’t know, so, I doubt she will. I told myself, listen, you can’t act like that. But you know, I can’t help some of it, but I toned it down a little bit this time and I think it helped me. And it feels really amazing.”

Hellmuth made no secret that his most recent WSOP victory was a long-time coming. “I’ve been fighting for this, Jack. I’ve had a sixth, a fifth, a fourth, a third, and a second, and another fifth since I won my last bracelet, so sometimes you keep putting in the effort and showing up and showing up and showing up, and you just have to keep trying and keep playing and I finally got to the one spot.“

In his short speech, Hellmuth also reflected on why this particular bracelet is so important to him.

“This bracelet means a lot to me because, I think of Chip Reese, I think of Doyle Brunson, I think of Billy Baxter, who is the all-time great in this. These guys, you know, back in the 80s, it was like a great player convention when they all came in to play the 2-7 tournament. You had Bob Stupak, all these great players, Dickie Carson, and you know, I sat there as a young 23 or 26-year-old player, and I said, ‘I want this bracelet, I want the deuce-to-seven,’ and then I faced the great Billy Baxter heads-up in 1993, and he beat me. And I faced Juanda, like in 2012, and he beat me.”


Hellmuth finished his speech by talking about the positivity that he promotes and that he sees in many of his fellow competitors, whether he expresses his true feelings to them during the heat of play or not.

“I also want to say it’s really cool to me that so many of the nice guys have won bracelets this year. Nice guy after nice guy. And I don’t like it when we have a few bad apples — forgive my tirades and tantrums — we have a few real bad apples in poker, but we really have an amazing community with a ton of really good people from everywhere in life. And I love that about poker.”