Dan “Jungleman” Cates’ win in the WSOP $50K six-handed event set the Mike “the Mouth” Matusow off on a rant over the rules allowing players to enter during the second day of play during multi-day events. 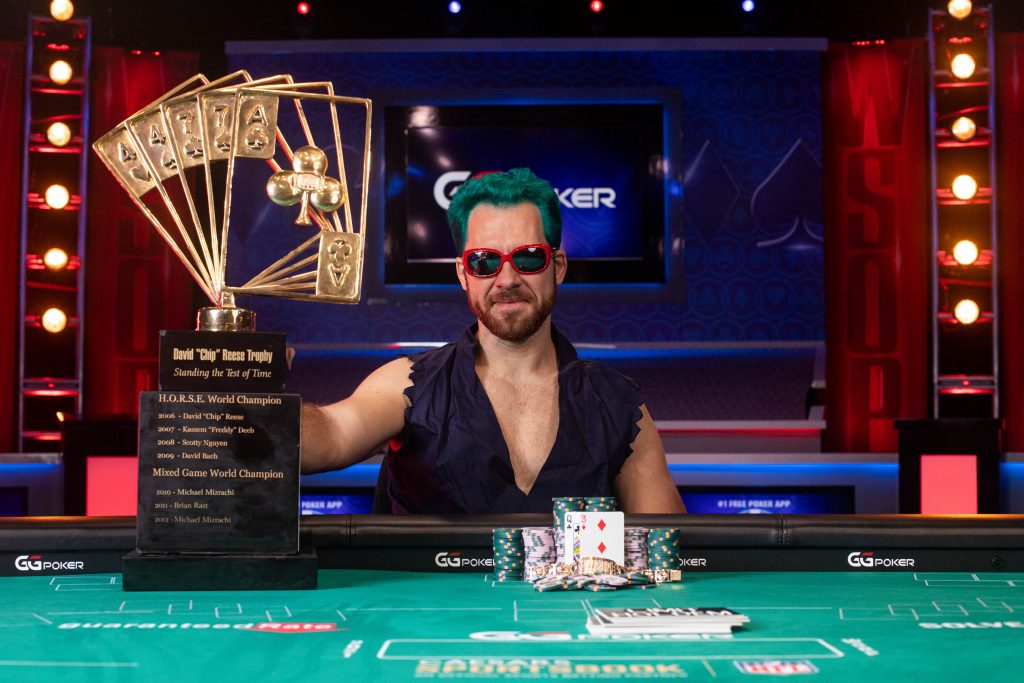 It wasn’t the green hair, but the fact that Dan Cates won his first bracelet after late-registering for the $50K tournament that rattled Matusow. (Image: WSOP)

The fact that players like Cates can wait all the way until Day 2 of this year’s Main Event to register is another issue that has Matusow, and others, bothered by the rules at the WSOP.

Matusow lashed out online after Cates won his first WSOP bracelet after skipping the entire first day of the event. He jumped into the action on Day 2 and tripled his starting stack of 300K, which was good enough to enter Day 3 second in chips with 39 big blinds.

Three days later, Cates beat Ryan Leng heads-up for the hardware. The 63-player event paid 10 spots, and Cates was one of four players who cashed by skipping Day 1; Chris Brewer, Josh Arieh, and Nick Schulman were the others.

I’ve set my life goal to use my platform to end all max late reg. And all day 2 registration at all cost! Tourney poker is for an = playing field, not to allow rich poker players the advantage of max late reg! I want what’s good for long term of tourney poker not for myself!

The Twitter tirade about the sanctity and integrity of the WSOP quickly brought tournament poker regulars into the tempest.

Matusow’s main gripe, it seems, is that late registration gives “rich poker players” an unfair advantage over players who choose to play all of the levels. He claims the advantage of avoiding the pitfalls that come with variance in the first levels, and the fact that late-registering players are mentally fresher than their opponents outweighs the disadvantage of starting a tournament with a short stack.

Putting issues of a player’s bankroll aside, others who support Matusow’s position argue that those who late-register for an event also benefit because they are starting closer to the money bubble, which provides them with better expected value in a short field, even if they may be facing tougher opponents.

Because profitable players get more edge the more hands they play. But his point still stands, if you were theoretically a break-even (or losing) player, obviously the later you register, the higher your EV. 100 person tourney 20 ITM. Would you rather reg. with 100 left or 21?

With two final tables and six cashes totaling more than $121K so far this year, Matusow is having a decent 2021 WSOP. In all the tournaments he cashed, only two had the option to register as late as the start of Day 2. And, true to his word, Matusow always bagged on Day 1 in the events in which he cashed.

Of course, not everyone, including two-time WSOP Player of the Year Daniel Negreanu, agrees with Matusow’s new crusade.

When a top pro enters late with 20 bbs instead of on time with 300 bbs, that helps literally everyone else in the tournament.

It lowers his ROI which increases yours.

You should encourage it.

It makes day one even softer.

So basically, the longer a pro who has spent most of his waking adult life thinking about poker sits out and then chooses to enter nearly short-stacked is beneficial to all entrants, according to Negreanu.


What if you could enter on the money bubble? Would that be a huge edge? Of course.

So obviously there is some point before the money where it is +EV to enter late, while hurting the rest of the field.

How do you know we haven't reached that point yet?

The WSOP has allowed late registration until the start of Day 2 in tournaments with buy-ins of $10K or more going back to 2017, but this is the first year in which players can enter some of the tournaments several blind levels into Day 2.

Main event should be sit down and play on time or don’t play at all.


The WSOP planned on allowing players to enter on Day 2 of the Main Event in 2020. When that decision was announced in December 2019, Norman Chad and others expressed their displeasure.

It just strikes me as awful.

If a player enters at the beginning of level six, they will have 75 BBs to start with. That’s far from the 20 BBs that Negreanu claims is a huge disadvantage to competent players who enter late. Several people argue that 75 BB’s to a seasoned pro like Arieh or Schulman isn’t a very big disadvantage at all, especially when they’re facing players who bagged less than that while grinding through a Day 1.

Reg on start of day 2 is with 75BB not 20. The reality is that this is step one on the road to making the Main a second chance reentry event in the somewhat near future. The level of integrity in poker has become microscopic.

Day 2B takes place today, with the survivors from Day 1C, E, and F joining those who decided to enter at the last minute, whatever their reasoning. Tomorrow will be the first day all the players will be playing in the same building at once.

The Main Event has evolved from the very beginning. Players voted on who should be named the event’s champion in its first two years, and then from 2008 to 2016, the end of Main Event was fundamentally changed with “November Nine,” when the tournament was paused for four months after the nine final players were determined.

The only sure bet in this debate is that organizers will continue to fiddle with WSOP schedules and structures, including the Main Event, for as long as the WSOP goes on.