The WSOP Player of the Year title is one that every pro wants to win. However, looking back, it seems that past victories aren’t a predictor of future success. 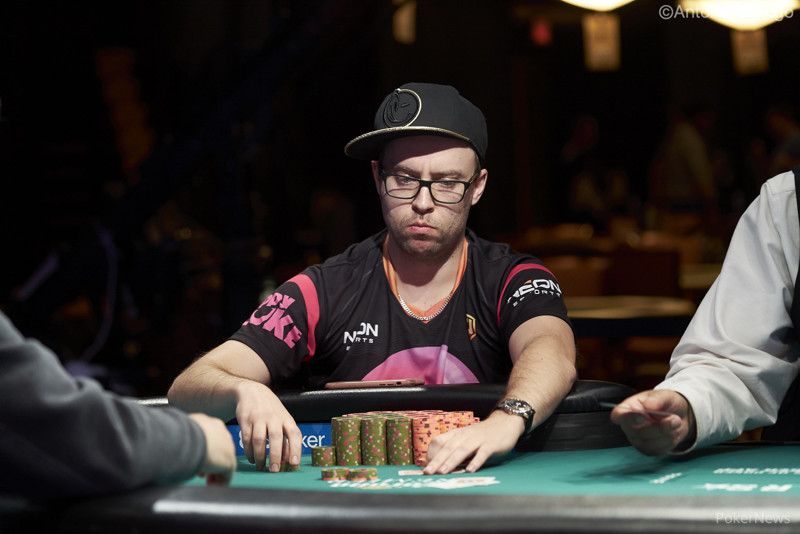 Reigning WSOP POY Robert Campbell, who earned the honor in 2019, won’t be defending his title this year. (Image: WSOP)

Ari Engel recently tweeted that five former POY winners haven’t cashed at all in this year’s series. We were intrigued, so we dug a little deeper into the record books. Based on our analysis, we found that eight previous winners have failed to finish in the money this year. The data, however, is undoubtedly skewed due to COVID-19.

In addition to the US travel ban keeping international players at bay until later this week, some players, including 2006 POY Jeff Madsen, sat out due to the WSOP’s COVID policies. Even with those factors in play, the current rankings and past results produce some interesting talking points.

WSOP Player of the Year: Then vs. now

The table below shows the WSOP POY winners since 2004. Daniel Negreanu has won the title twice and currently has 14 cashes at the 2021 WSOP. That puts him seventh in the current standings going into the WSOP Main Event. Despite winning more than $263,000 so far this year, talk on Twitter suggests that he’s still down over $100,000. 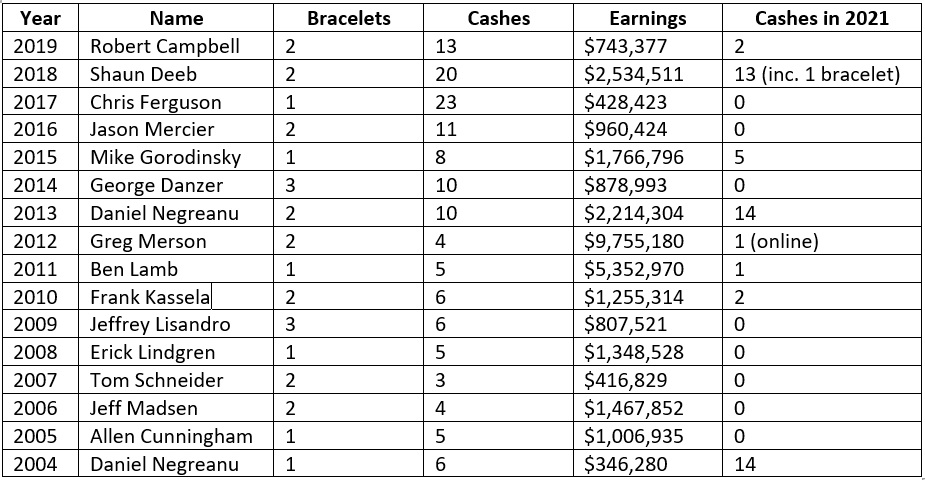 Negreanu has the bankroll to cope with swings of that magnitude, so his “poor” performance at this year’s WSOP won’t significantly hurt him. Moreover, he’s making an investment in his legacy: winning another bracelet would further cement his position as one of poker’s all-time greats.

Daniel has a ton of cashes but he's still stuck something like $100k.

This shows that the Player of the Year race isn’t all about prize money and cashes. They matter, of course, but they’re not the only variables that go into the WSOP’s formula. Indeed, the current POY standings further prove this point.

2021 WSOP Player of the Year Leaderboard

Schwartz is leading the way, even though he’s won less money than Gerhart and Zinno. He’s also failed to win a bracelet so far this year. What he does have, however, is five final table appearances and a trio of top-three finishes. Additionally, two of his best results have come in $10,000 championship events.

Phill Hellmuth has never won the POY despite being the WSOP’s all-time bracelet leader. Hellmuth, who’s having another strong showing this year, including five final table appearances and one victory, currently sits fourth in the POY race, and is one of the biggest critics of the WSOP’s scoring system.

The prestigious @WSOP Player of the Year should be about cashes? This sounds absurd. Under current rules, someone winning 4 bracelets finishes in POY behind someone w 18 cashes/2 Final Tables: ridiculous. Surprised you’re defending these rules, even if it does heavily favor you https://t.co/kctIsbitmb

The lesson here is that consistency and cashes matter, but so does context. An event’s size and stature go a long way to determining how much weight it’s given by the WSOP. In turn, this dictates how many POY points a player can earn by performing well in any given tournament.

The other lesson here is that past winners don’t always become future contenders. Negreanu is the exception to the rule, as is Shaun Deeb, who won in 2018 and currently sits in fifth place in this year’s race. Everyone else is MIA.

Because COVID disrupted last year’s WSOP, Robert Campbell, who won POY in 2019, is still the reigning champion. He currently has two cashes and won’t be retaining his title. Other notable names from the past, including Jason Mercier, Greg Merson, Jeff Lisandro, and Allen Cunningham are all MIA.

The WSOP POY race is fun to follow and can be a feather in the cap for pros who win it. However, success can be fleeting and, as the data shows, winning is often about running hot at the right time. It’s also possible to say that the reward doesn’t necessarily outweigh the cost of playing enough events to win. This year’s WSOP POY gets $15,000. That will barely make a dent in the amount someone like Negreanu has spent on entry fees at this year’s series.

So, while the Player of the Year title might be a nice accolade, there are probably more important things for most players to shoot for at the WSOP.