As we reported yesterday, Josh Arieh is the 2021 WSOP Player of the Year. But, following a last-minute surge by Ben Yu, he almost wasn’t.

Arieh cashed 12 times this year and picked up two bracelets. That run earned him 4,194.59 points and, as everyone assumed, an unassailable lead with only three events left to play on Tuesday.

The organizers were confident enough to proclaim Arieh the winner before the WSOP had officially concluded, and the man himself raised a glass in celebration. As things transpired, however, Ben Yu still had a shot at winning the title, right up until the final event.

Shaun Deeb, who was also in the running to overtake Arieh, sowed the seeds of doubt on Tuesday. He tweeted that an upset was still possible, despite the poker community holding a digital ticker-tape parade for Arieh on Monday.

The math made it possible for Yu to surpass Arieh if he finished first or second in Event #88. Deeb could do the same if he won that tournament. 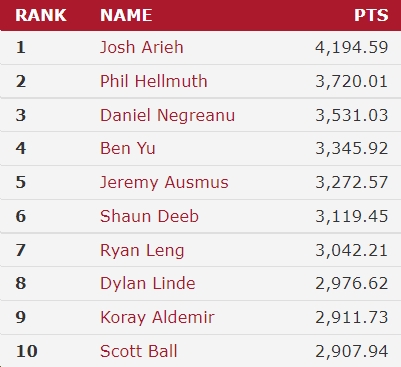 So, while it was nip and tuck for Arieh on Tuesday, he was finally able to enjoy his accomplishment once Yu and Deeb were sent to the rail in Event #88.

So, why the last-minute confusion? The WSOP’s premature announcement was a result of an online result not being counted quickly enough.

Yu scored 95.6 points for finishing 57th in the WSOP.com Mini Main Event. That event ended on Sunday, but the points weren’t added to Yu’s total until late on Monday. By that time, Arieh had been named the WSOP POY.

People also forgot that Deeb was played the final event and, in his own words, he’s a master at closing out tournaments when it matters.

The slow update and mathematical possibilities going into Event #88 meant Arieh’s position was far from safe. Things got even worse as Yu and Deeb went deep. However, after a major sweat, it was a case of all’s well that ends well for Arieh, who remained the POY. Yu finished a credible fourth behind Phil Hellmuth and Daniel Negreanu, while Deeb finished in sixth position.

For those involved, it was a tense climax and the drama certainly wasn’t lost on poker fans.

The WSOP Player of the Year race rarely generates more than a flicker of interest, but things were different this time around. Only WSOP events in Las Vegas or on WSOP.com contributed to a player’s score. That created a sense of urgency and drama this year, as players couldn’t rely on earning more points at the WSOP Europe.

Moreover, with Arieh coming out of nowhere, Hellmuth setting records, and Negreanu fighting hard, there was plenty of tension over who would claim the coveted title. And, with Yu and Deeb almost rewriting the record book in the final event, the exciting climax of the POY race ended the WSOP’s run at the Rio in truly dramatic style.