Grosvenor’s Goliath has lived up to its name, beating its own live attendance record two days before the registration desks close. 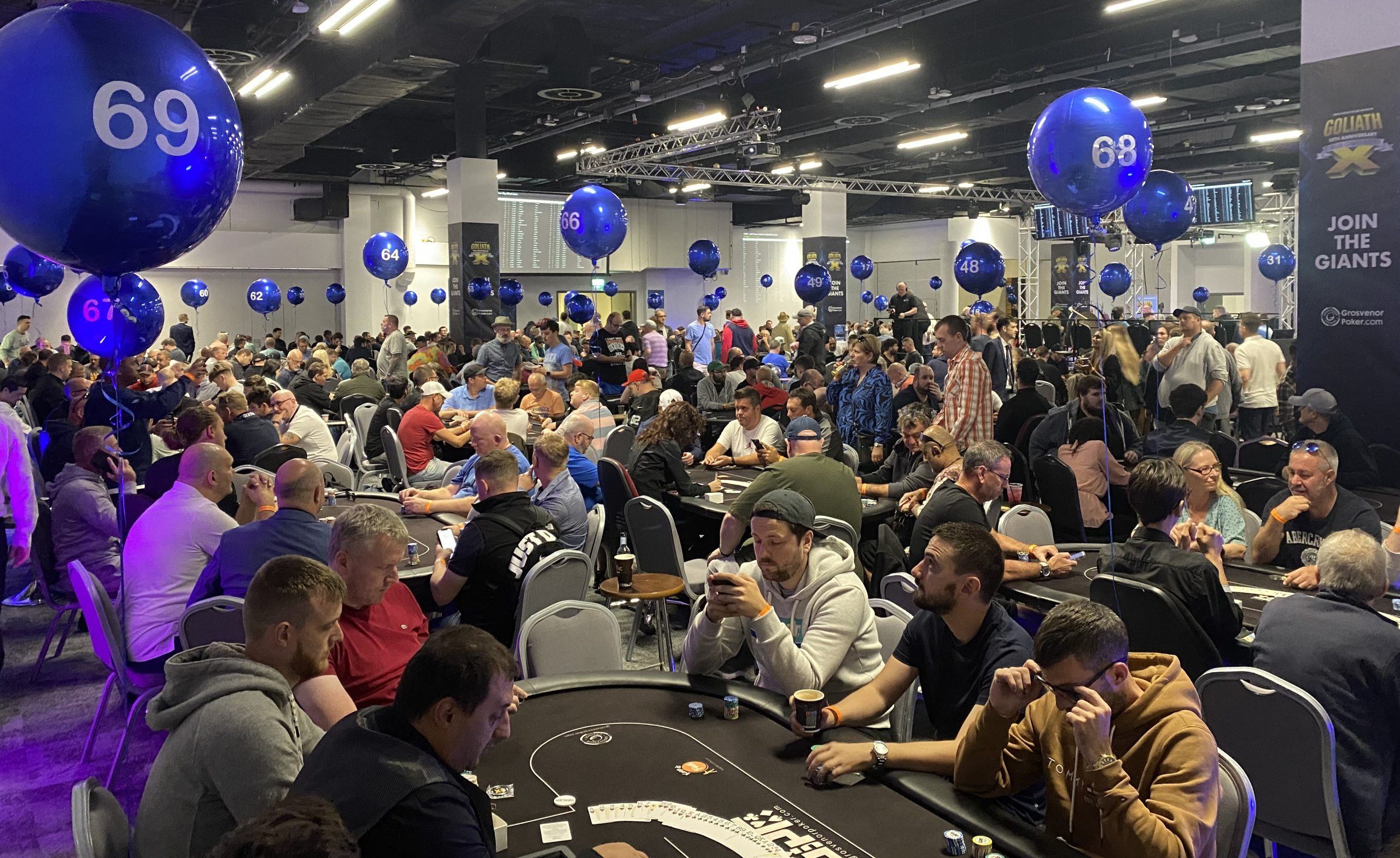 Grosvenor Poker’s Goliath broke its own record to remain the biggest live event outside of Las Vegas. (Image: Twitter/GrosvenorPoker)

A two-year stint online due to COVID-19 restrictions hasn’t cut the Goliath down to size. The biggest live poker event outside of Las Vegas is celebrating its 10th anniversary this year, and it’s doing it in style.

The first of eight starting flights in the £150 ($175) tournament got underway on August 27. A total of 1,294 entries that day set the tone for what was to come. By the close of Wednesday’s Day 1E, Goliath had surpassed its previous record.

Goliath is back and bigger than ever

The Goliath’s last live outing was in 2019. On that occasion, 9,300 entries were collected over the course of seven starting flights. That made it the biggest live poker tournament outside of the WSOP and allowed the winner, Lee Reynolds, to bank more than $78K.

Two years of online action has clearly created a desire among players to get back out on the circuit. That desire hit a peak on Wednesday when the Goliath hosted its biggest-ever flight. A total of 1,432 entries were collected on Day 1E, taking the total number of buy-ins to 10,236.

Another day another BIGGEST Day Ever!

Today is the biggest EVER GOLIATH Flight 1E with 1,432 entries.

That’s impressive, but there are still three starting flights to go. That means we could see the total number of entries top 11K. That isn’t quite enough to beat WSOP events such as the $500 Housewarming, which attracted 20,080 entries this year.

However, it does make Grosvenor’s Goliath significantly bigger than the WSOP Main Event in terms of participation. It also makes Goliath bigger than any other live poker event held outside of Las Vegas.

Aside from any pent-up desire to play live poker after two years of COVID-19 restrictions, there are other reasons for players to take part in the 10th-anniversary Goliath. The best reason of all is the £1 million ($1.1 million) guarantee.

Side events have also given players a reason to descend on Coventry’s CBS Arena. One of the most interesting tournaments on the schedule is the £440 ($510) mystery bounty event.

Mystery bounties are the latest craze in poker, with players pulling $1 million prizes in recent weeks. Grosvenor’s tournament team is embracing this trend by offering over 100 mystery prizes worth up to £20K ($23K).

Overall, this year’s Goliath series is a hive of activity. More importantly, it’s another record-breaking event for Grosvenor Poker.