The record-breaking Goliath by Grosvenor Casinos may be over for another year but its impact will be felt throughout the poker community and beyond. 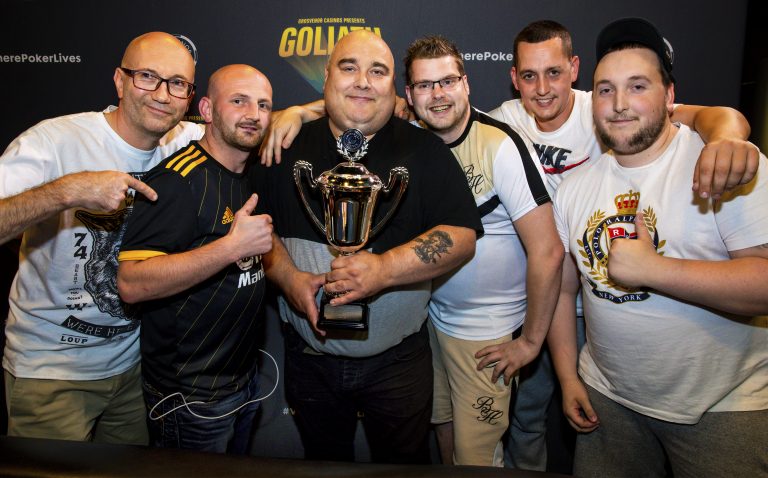 After attracting 9,300 entries and smashing its own record for largest poker tournament outside of Las Vegas, the 2019 Goliath is over.

When the masses fell away and just nine were left on August 4, the race for victory was on. Leading the way at the start of finale was Christopher Bartlett.

Holding 61.3 million chips, the British grinder was in a comfortable position as the final few played down to one.

As the first hands were, those under the spotlight were understandably cagey. Aside from the prospect of turning a £125/$151 buy-in into £118,000/$143,500, all the finalists were playing for a career-high payday.

For one player, however, the cards helped ease any tension. Picking up pocket kings just a few orbits into the final session, Lee Reynolds took charge of the action.

That early rush of cards worked in his favor as he was able to pick and choose his spots as the finale rolled on. Being aggressive when necessary and sitting back as others lost their footing, the Brit eventually found himself in a position to negotiate a split.

With five players left and life-changing money on the line for everyone, a deal was struck. Former chip leader Bartlett locked up $84,975 while the top stack at the time, Cristian Tamas, secured $97,929.

The remaining three, including Reynolds, banked just over $72,000 before play resumed.

Now the pressure was off, bets and raises became more common. First to fall was Bartlett, quickly followed by Derek Borwick.

Chip leader Tamas then lost the majority of his chips to Reynolds before hitting the rail in third.

By helping to oust a former chip leader, Reynolds held the advantage heads-up against Tom Jones.

Despite locking up healthy sums of money, the final two still had a trophy and some extra cash to fight for. Those incentives meant that neither was willing to go down without a fight.

Eventually, something had to give and it was Reynolds who became the hammer. Chipping away at Jones, he finally got the break he needed with K♦8♣.

Calling an all-in from Jones who was holding J♣8♥, the amateur only needed to swerve a jack to win. As the board ran out 8♠3♠2♣7♥9♥, Reynolds congratulated his opponent before sitting down to take stock of his achievement.

Speaking after his win (see video above), the new Goliath champion said he had luck on his side throughout the tournament.

While luck is necessary in any tournament, it’s especially important in the Goliath. With 9,300 entries, the event has not only become a symbol of Grosvenor’s success but the current level of interest in poker.

In fact, with retired boxer David Haye taking part in this year’s Goliath, interest has soared. Despite being a complete novice 12 months ago, the knockout artist proved that hard work and dedication pays off.

After working with pros, experts and mental coaches, Haye finished 40th. As well as a personal achievement, the Hayemaker’s performance could help raise the profile of poker in the UK and beyond.

“King Saul thought that Goliath was too big to defeat, David thought he was too big to miss” 1 year ago, I travelled to Coventry to announce I’d be taking on the biggest live poker tournament outside of Vegas, @grosvenorcasinos Goliath. It’s been ten years since I toppled the real life “Goliath” Nikolai Valuev to win the World Heavy-weight boxing Championship. A decade later, I again found myself in the same position in #DavidVsGoliath19. I’d never played a hand of poker in my life! I’ll be the first to admit, I completely under estimated the sheer complexity of poker. The months that followed were filled with highs and lows, uncovering a world I never knew existed. That simply motivated me to immerse myself in the art, travel the planet to play with and learn from the world’s best. A tough new challenge which tested me, my patience and mental endurance. I sat down at Goliath with the sole intent of winning. Simply ‘taking part’ never has been my mentality. So to come 40th out of 9300 players is bitter sweet. Poker, I have learnt isn’t simply a game of cards, it’s a lesson in discipline, positivity and unwavering resilience. As in life, whilst you can’t allow a big hit to keep you down, derailing you from the end goal, the jackpot. Equally, you can’t get drunk on your own success, even when Lady Luck seems to be right with you, you can’t take this success for granted, as Lady Luck may give you a almighty slap! The kind tutelage and stellar advise I’ve been given by so many pro’s has been invaluable. Shout out to to everyone tagged. ??❤️ It allowed me to realise new friendships. Special thanks to @audleyharrison who travelled to 3 continents coaching and mentoring me. May my poker journey long continue…

As a sports star with no prior experience, Haye has shown a non-poker audience what’s possible.

While it may not be quite as significant as the Moneymaker effect, it should help boost poker in Europe and, potentially, help the 2020 Goliath reach 10,000 entries.

Congratulations to Lee Reynolds, beating 9,000 players is not easy, I imagine how many hours it has taken, but I imagine that the prize juices of 78K are worth it.