Phil Hellmuth, the Truth as I Know It

We’re about to spend a few days hearing an awful lot about Phil Hellmuth after his win last night in the $1,500 No-Limit 2-7 event at the World Series of Poker. Some will eat up the coverage, while others will complain that they’re tired of hearing about Hellmuth. 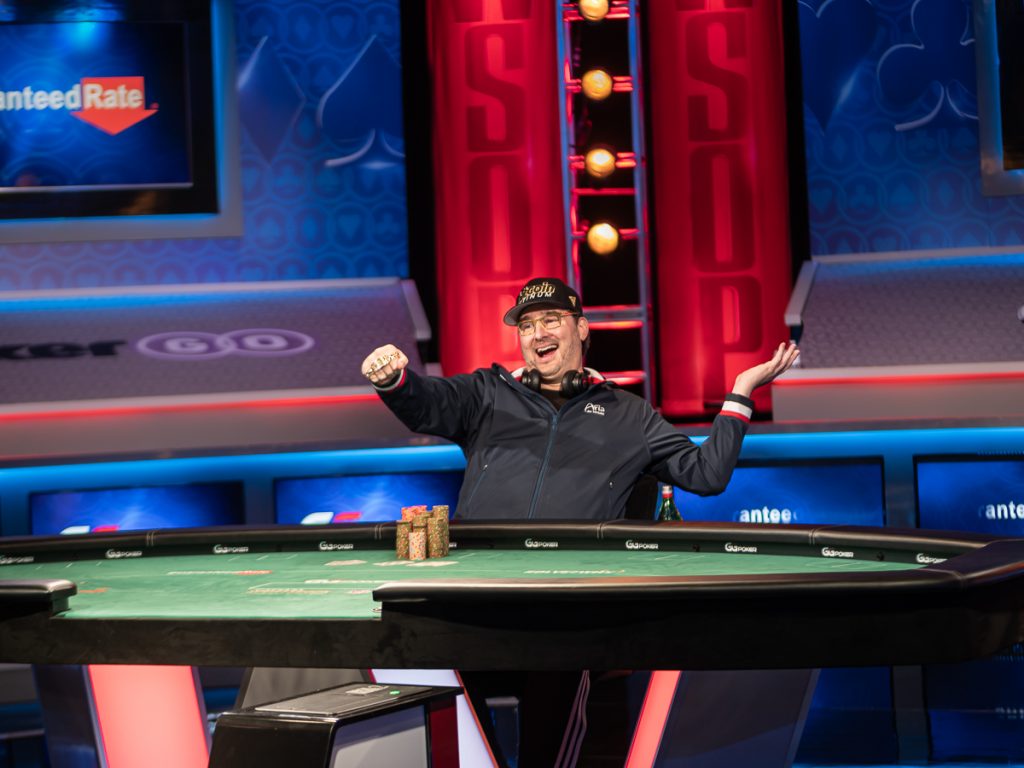 Hey, I got another one! (Image: Chris Wallace/ CardsChat News)

It’s amazing how many wildly different opinions I hear about Hellmuth. Many think he’s the greatest player ever. But many high-stakes pros seem to think he’s really not very good, and they mock the idea of him being the GOAT. The general public sees Hellmuth’s bad behavior on television and many think he’s a jerk. But those who know him talk about a kind and gentle man who is often quite humble and wears his heart on his sleeve.

So who, really, is Phil Hellmuth?

I’m no expert, but I’ve had a good number of interactions with Phil (fellow pros generally call him by his first name), and we have many mutual close friends. I know people who knew Phil when he was playing home games in the Midwest and when he first started coming to Vegas for the WSOP. And I know people who play with him regularly still. The stories I’ve heard have validated my own thoughts about both his character and his play. And the truth is, he’s all of the things you’ve heard.

Hellmuth can be a grumpy, bratty, petulant child at the poker table on occasion, though these incidents happen far less frequently than the cameras would have you believe. It makes for great TV. That’s why guys like Mike Matusow are famous. In fact, I was on the receiving end of a huge Matusow blowup at a big event in 2008 and the cameras rushed to our table. I was destined for my 15 minutes of fame until Phil laid on the floor and curled into a ball when he busted out of the final table. That was my first experience with both men, and I saw miserable behavior from both.

Matusow is one of Hellmuth’s best friends and was the first to get a hug after Phil won his 16th bracelet last night. And the two men are similar in many ways. Because while Matusow was spouting every curse word in the book and declaring war on the whole table 13 WSOPs ago, I was chuckling. Neither of these men is dangerous or truly hateful when they lose their cool.

Both appear brash when they misbehave, but both are also unassuming and almost bashful some of the time. I think if anyone actually ever shouted at them to sit down and shut up, they would be contrite and apologetic. So, Matusow’s blow-up didn’t bother me a bit. But I’m aware that some people would have felt threatened or insulted, and that’s why such behavior generally shouldn’t be tolerated. 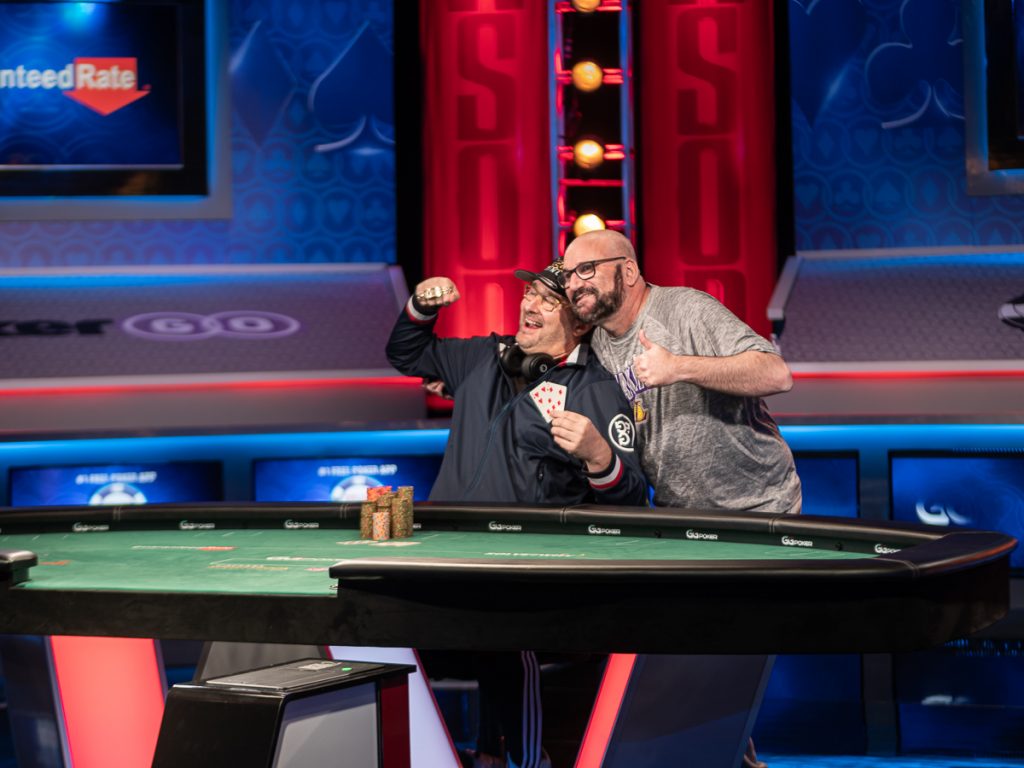 Mike Matusow (left) shares a kinship with Hellmuth as someone who knows what it’s like to lose your mind at a poker table. (Image: Chris Wallace/CardsChat News)

Art of the blowup

There’s been a lot of talk so far this series about Hellmuth’s blowup at Anthony Zinno last week, and his threats to burn down the Rio. Let’s get rid of the ridiculous idea that the so-called Poker Brat is actually a threat. No one at the Rio thought that Hellmuth actually intended to hurt anyone. If you’re taking his words at face value, you can stop now. It may be unacceptable to say, but WSOP officials and everyone else knew there was no substance behind his promise of violence.

And Zinno is no wilting flower. If he were bothered by Hellmuth’s words, he could have called a floor and probably gotten a penalty enforced. He didn’t, because he knows Phil is harmless and just venting. 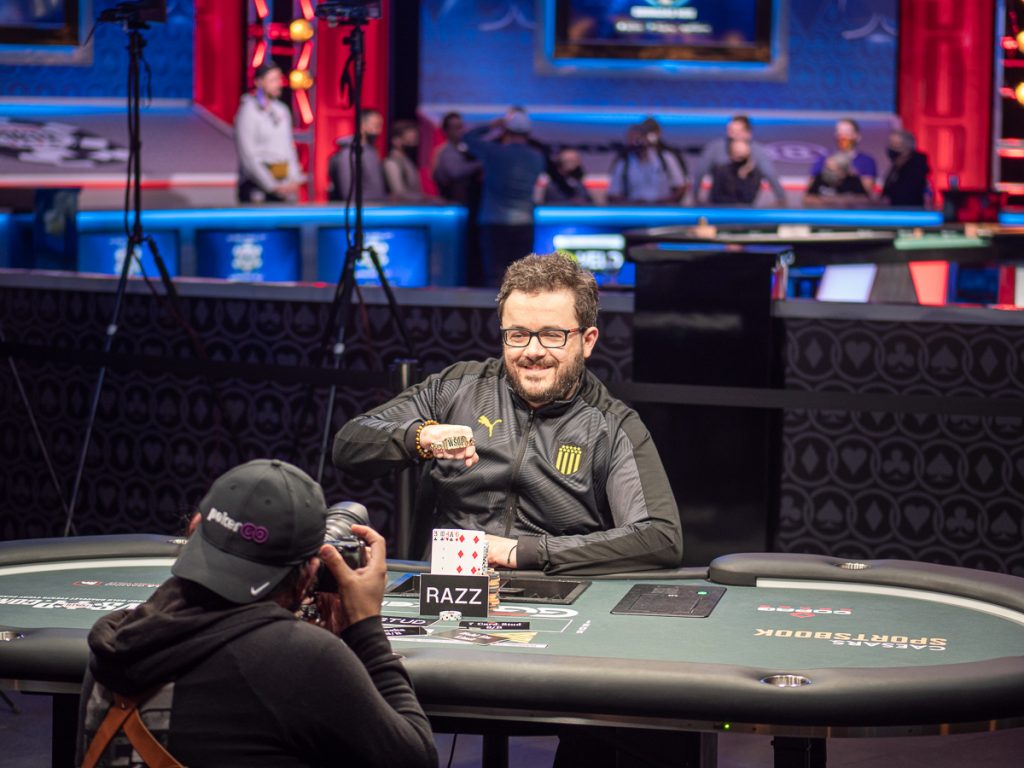 Get yelled at by Phil, then win two bracelets in a week? Seems like a fair trade. (Image: Chris Wallace/CardsChat News)

I’m never one to tolerate a bully. In fact, I stand up to them almost to a fault. I go to any length to make sure that no one feels unsafe when I am in the room and will draw the fire anytime there is an attack. But Phil is no bully. His emotions can get out of control — a not uncommon trait among the hyper-competitive — but he is both a good human and, at times, a poker player behaving badly.

I agree with the people who say Hellmuth should have been penalized; he probably agrees, too. Phil is often ashamed of his behavior later and knows that he needs to continue to work on his impulse control. But it doesn’t seem to be working all that well, at least not if we judge him by his recent outbursts.

The blowups may be unacceptable, but they are not as commonplace as TV coverage makes it appear.

I’ve played probably 30 hours of poker with Hellmuth and have never seen one of these blowups while in a game with him. He has been kind and welcoming to fans and remarkably tolerant of cameras in his face. I’ve played with him at a table right on the rail during the Main Event when the cameras and fans would have driven me nuts, but he just smiled and shook hands and signed hats. But, he also blocked me a while back on Twitter. So if you’re coming at him as something other than a fan, he may not be so welcoming.

Is Hellmuth bad at mixed games?

Coming up in the online poker world, I often heard stories about how Phil was a terrible mixed game player. I’ve also heard stories about almost every other famous player and how bad they are. Everyone wants to talk about how the champ sucks. I’ve even experienced it on a smaller scale playing in Minnesota after I won a bracelet in HORSE. 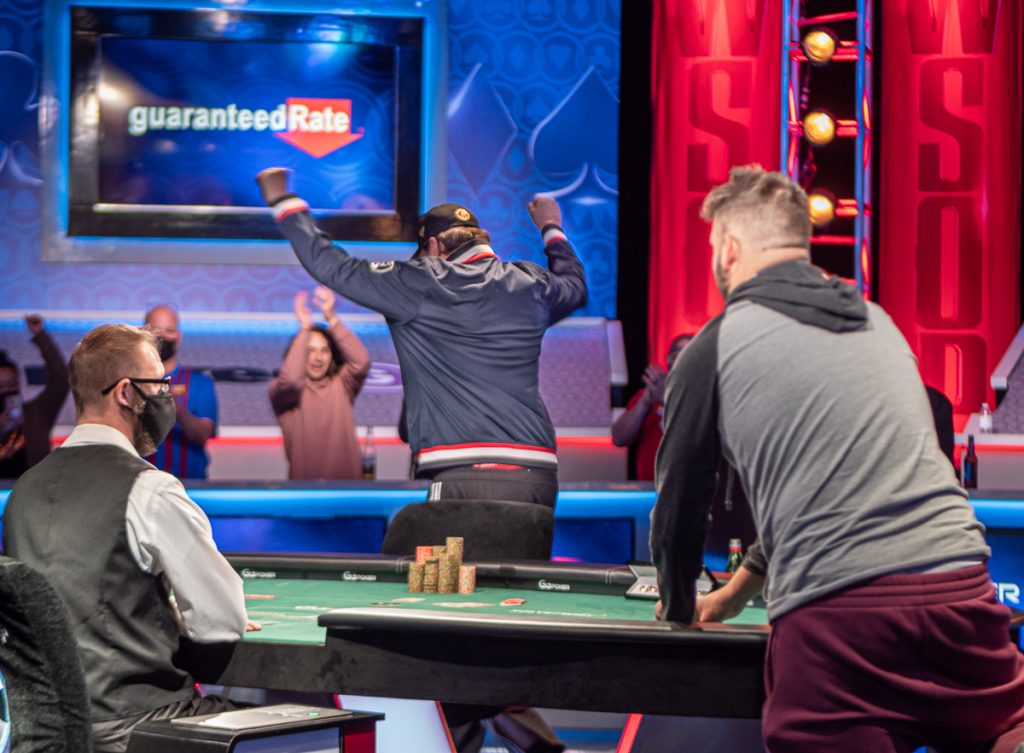 Suddenly I started to hear stories about how terrible I was, things I’d never heard before. And I leaned into it, acting like I had no idea what I was doing, buying in short, claiming hands that would make my play look weaker after I mucked them. And other pros who won big events told me similar stories.

The best advice I got was from a fellow bracelet winner who told me, “The most money you make from a bracelet is from people who think the champ sucks and want to tell their friends they beat you. That bracelet is going to make you money for the rest of your life.”

So I was glad to play enough with Phil to be able to judge his game for myself. And while I did see some plays that were very questionable during my time with him during the Main Event, I’ve also seen really brilliant play in mixed-game tournaments.

I played for three days with Hellmuth when he won his first non-Hold’em bracelet in Razz in 2012. In fact, he busted me in 17th place. And the whole time he was cordial, asked me questions about my life and about music (he called me “guitar guy”). He played Razz as well as anyone I’ve seen, and I played high-stakes Razz for much of my living for a while. I know the game plenty well, and Hellmuth played great. No wonder two of his 16 bracelets came in Razz.

I also played with him in the $25K HORSE event this year. At an incredibly tough table, Hellmuth played very well. And when I got moved to a new table, a number of nosebleed-stakes pros mocked the idea that he was a great mixed game player. I said nothing. It’s not my battle, and these players don’t want to believe otherwise anyhow. 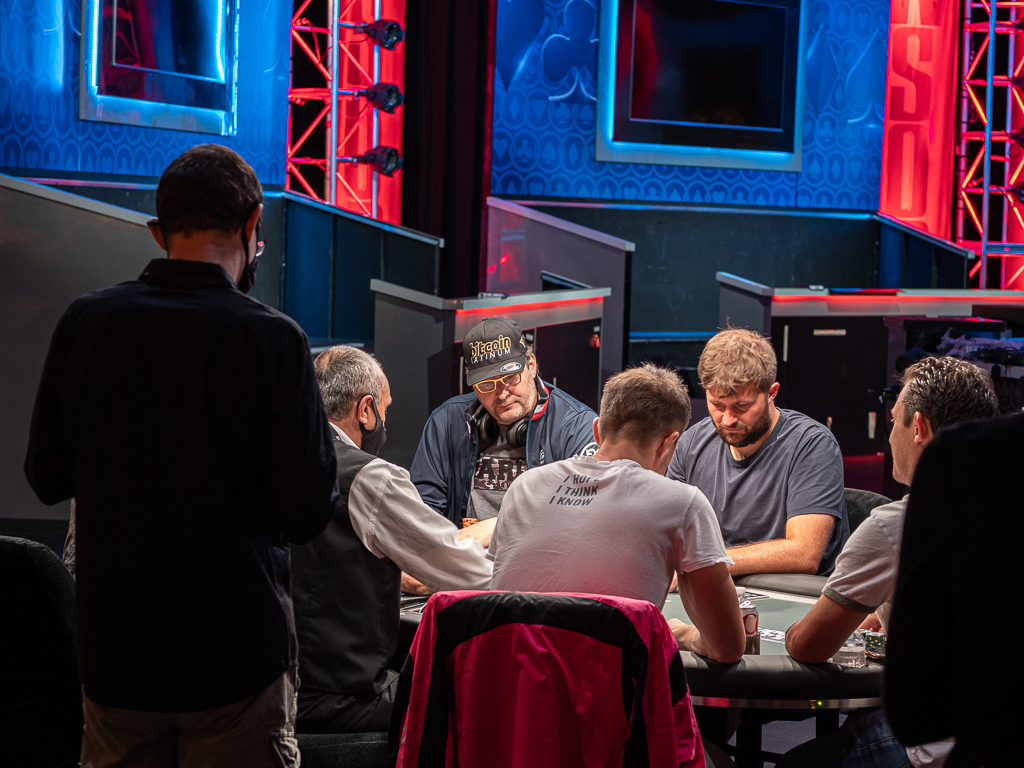 At the final table of the $25k HORSE event. (Image: Chris Wallace/CardsChat News)

I can’t say whether Hellmuth is a world-class mixed game player when it comes to cash games, but none of the players who were insulting him have won as many bracelets in non-Hold’em games as he has, and I’ve seen strong play from him for days at a time.

I have a friend whose dad used to run a home game in the Midwest. She often told me of how generous Phil was with her father once he became disabled. This year I played with a player who was a regular at that game, and he repeated the stories. I know of many charities Phil has helped and many players who speak very highly of him as a human who cares.

Human is the keyword here. Phil is human — maybe more so than most of us. He has trouble controlling his behavior, trouble with the chip on his shoulder that never seems to go away. And he comes off as arrogant for the camera so often that half of poker fandom sees him as a malignant narcissist — like a Donald Trump or a Hollywood star who treats people around him with disdain.

But Phil isn’t like that. At times, he is childlike, which makes it easy to understand why he behaves the way he sometimes does. Where a true narcissist will dismiss those around him as worthless unless they can be used to achieve a goal, Phil is genuinely interested in those around him, big or small, famous or just a regular Joe. I certainly don’t intend to excuse his behavior, simply to explain it, to help you understand the man in a way few do.

The media tends to thrive on the good guy vs. bad guy and us vs. them. America has a huge problem with this in our media, and it’s our own fault; we keep turning it on and watching the channels that offer nothing but talking heads and anger. 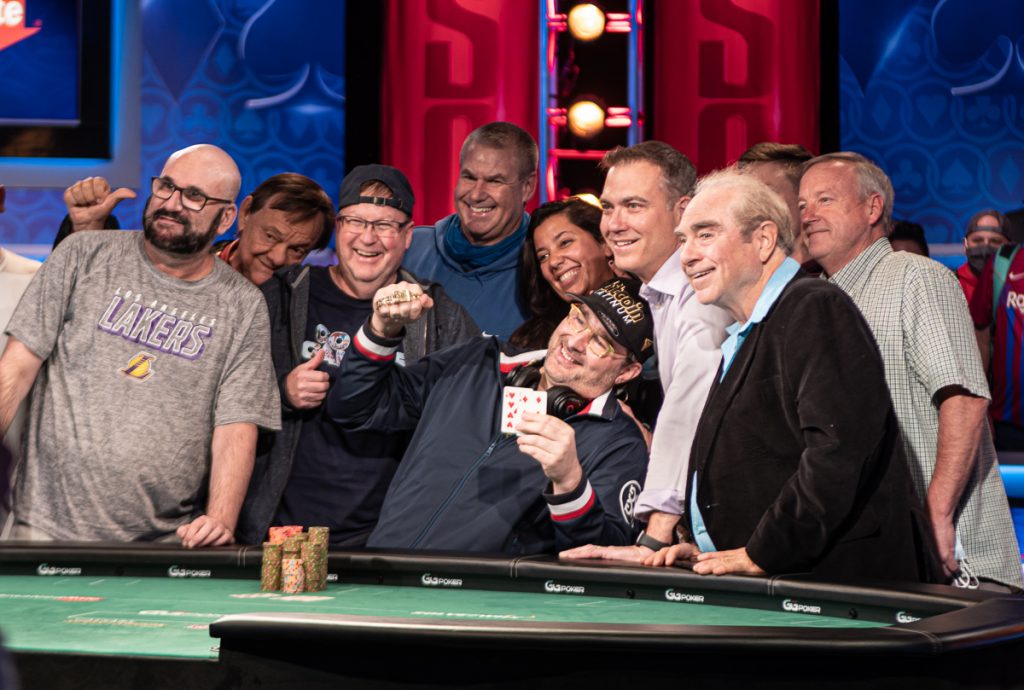 Now that I’m a member of the media, I won’t do that. The world isn’t black and white and if it means that refusing to stoke anger, or take sides for clicks, means that no one reads my words, then I’ll head right back to the tables. I’m lucky to have that option. I can jump in a $2/5 game and pay my mortgage anytime.

What I won’t do is write a story about what a jerk Phil is — though I will report on his bad behavior. I also won’t write a story about how he is the all-time undisputed GOAT, the perfect player who never makes a mistake, because that isn’t true either. The whole truth is that he’s a complex man; troubled at times, but often friendly and kind and generous even when he won’t get credit for it. He’s neither heel nor hero, and life isn’t professional wrestling.

Let’s all try to remember that.

Met Phil years ago in the Caesars sportbook. Chatted me up about who I liked in the NFL games. Seemed like a genuinely nice guy.

Great article! Awesome to hear more about the legend from an insider that isn’t biased one way or another. Thanks!