So much for Phil Hellmuth’s positivity. The World Series of Poker champion’s display of pure, unbridled vulgarity and bullying during the final table of the $10,000 Seven-Card Stud Championship is making the poker world wonder how bad can he get before tournament officials step in. 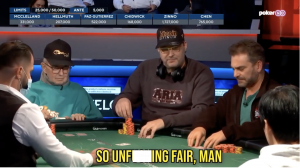 His outburst was aired nearly live on PokerGo as former WSOP director Jack McClelland sat right next to him. Hellmuth has marketed himself as the “Poker Brat” for ages and is as well-known for his outbursts as he is for his record-holding 15 WSOP bracelets.

But the vitriol unleashed at Monday night’s final table, which included pyromaniac threats and a couple of dozen bitterly-spit f-bombs, crossed a line of civility well-defined in the WSOP rulebook.

Was @phil_hellmuth out of line last night at the final table of the WSOP $10,000 stud final table?

All the bracelets in the world do not excuse that behavior at the table. Ever.

Give eventual winner, and the main target of Hellmuth’s bullying, Anthony Zinno props for staying cool and collected on his way to his third bracelet and$182,872. He never even called the floor to ask for intervention.

It’s not a question of if Hellmuth should have been penalized, but how. The WSOP rulebook states:

Rio prohibits the use of obscene or foul language in any public area of the casino at any time. Any Participant who uses such language or makes a foul, profane, obscene or vulgar statement, or speaks abusively or in an intimidating manner to another Participant, a dealer or a WSOP Tournament staff member, will be penalized. These penalties will be levied based on Rules 40, 113, and 114.

113. Penalties: In its sole and absolute discretion, Rio may impose penalties ranging from a verbal warning, one missed hand away from the table up to disqualification and expulsion from the Casino.

Hellmuth is a repeat offender at violating the WSOP’s rules to combat boorish vulgarity in their tournaments. His outbursts are often directed toward fellow competitors, but Hellmuth rarely receives a penalty. It’s a double-standard that hasn’t gone unnoticed.

Hey poker peeps…. are we sick and tired of the @phil_hellmuth bullshit temper tantrums. Anybody else would be penalized for that. He has gone too far…something should happen!!!!! This is not good TV.

I know Anthony and he’s definitely one of the classiest/nicest guys in all of poker who will definitely take the high road, but that doesn’t excuse Hellmuth’s disgusting and disrespectful behavior that the rest of us would be penalized for.

I agree Norman. I also think that the WSOP, it's supervisors and TDs, bear a huge responsibility here as well. If the TD's would start issuing penalties, his behavior would be curbed. I'm sure Jack McClelland on his right would have issued him another penalty for that outburst.

Hellmuth is like an abusive husband. Constantly crossing the line and then apologizing with some rationalization, only to do it again the next chance he gets.

McClelland, who finished fifth last night for $40,284, was the WSOP’s tournament director in 1996 when he gave Hellmuth a 20-minute penalty.

Funny thing is Jack was sitting right next to him yesterday. I wonder what he did 25 years ago for Jack to give him a 20 minute penalty and threaten to boot him from the WSOP. pic.twitter.com/aN9SNp8aMZ

CardsChat reached out to WSOP officials and will update this story when they get back to us. A clip of Hellmuth’s moments from Monday can be found here. Warning, it’s rated R.

Doesn’t make it ok. In case I wasn’t clear, I apologize for going too far last night. https://t.co/a84avcCoaW

I Am So Tired of Helmuth’s Loud and Poor Behavior….
WSOP hasn’t publicly imposed any consequences on him.
SHAME ON WSOP…
If someone else now act up now..
how can the WSOP penalizes them without being a hypocrite?
Do, the right thing and give Phil a penalty.