The Time I Met Annie Duke

Ok - this is a special story because I interacted with this pro more than any other save for Mike Sexton ... enjoy ...

As many of you know I've done work with the World Poker Tour for a variety of things ... as a freelance writer, web work, etc etc. I'm hoping to do more in the future and actually involve CardsChat, but that's all TBD and in the air so no promises.

Anyways - many of my stories come from WPT interaction. This one, however, does not. As the owner of Gaming Illustrated, I write stories and articles about videos games and get a pass to the annual E3 convention here in Los Angeles. Before they consolidated the show (thankfully) it used to be a ridiculously HUGE event and Annie Duke (with her brother) sponsored a poker game from Crave Entertainment (their dev studio is in North San Diego).

I got the press blast a few days before that Annie would be playing poker at the show on the floor against VIPs, so of course as a press member I have the right to do anything I want at the show - so they booked me for my appointment game with Annie (along with 4 others) and we sat down for about 15 minutes and played some NLHE with play chips. I got there early and was SURE to get the seat to Annie's right and made sure Carl (my friend I brought to the show) took plenty of pictures.

The players that I've railed here at CC can testify that I like to crack a lot of jokes while playing poker. Sometimes I'm the table ambassador, sometimes I just play and stay quiet. Well I sure wasn't going to stay quiet playing with Annie Duke!

So we start playing, and of course I just get right into it with Annie. Now in person, she is so super nice it's ridiculous. She would take pictures with fans, have conversations, and generally was 100% of the persona we see on TV if not nicer. We talked about her kids, what video games they play, and how this was her first E3.

I pick up AKo UTG and raise 4x the BB. Annie calls ... so does the REST OF THE ENTIRE TABLE because they all want to be in a hand with Annie Duke. Of course, we're also not playing for anything. Flop comes AK6 rainbow. I stack it. Annie calls, one other guy calls. We all flip, Annie has AQ and the other guy had something like T6o. So yes, I took out Annie Duke. We both laughed and I said, "well this is E3 so I think you get 3 lives" so we just gave her more chips so she could keep playing.

I was really happy that Annie kept the conversation going, and we talked about the big money seen in the recent wsop main events. This was 2004, and Annie's win at the TOC over Hellmuth had just been televised. Her "1 card exposed" tilting of Hellmuth was all the rage at that point, and I swear all my friends in home games and all the guys at the casino were doing this trick (so annoying) and I let her know that she'd started something horrible in the world of poker ... and she laughed. She said that was really the only time she'd ever done something like that, because she knew that Phil had her read so wrong she was hoping to tilt him (and definitely did).

The funny thing then was that she asked me, "This is my first E3 ... if I go around can I get a lot of free crap?" I laughed ... she sounded like my girlfriend (now my wife) who is always bargain hunting and loves to get free giveaways at tradeshows. My response was classic. "Annie, you just won $2 million at a WSOP invite only freeroll. What free crap could you possibly want?!" She thought that was hilarious and said it was more about the principle which I definitely agreed with.

I asked her about people like Matusow who tend have a big "on air" personality as well as the "gambler" aspect to a lot of the big name players. She said for the most part, what you see on TV is geniunely who they are in real life, even for people like Hellmuth (which I can agree with, I have a story about that too).

Annie said that a lot of the big winners you see on TV are just flat out broke within weeks because they have awful gambling problems. They'd win a million in a huge tournament, then blow it on side bets, sports betting, blackjack, etc etc. She said she has always been careful not to fall into that easy trap.

I asked her about Pros watching programs like the WPT and WSOP to see if they can get reads on other pros for big stakes games, and she widened her eyes and said "Absolutely". Interesting.

So all in all this was probably one of my favorite experiences. I got to play some poker with Annie Duke (I even knocked her out lol, in a play-chip game nobody was playing seriously) and I was lucky enough to keep a conversation going with her pretty much through the whole 15 minutes. Annie was such a super nice lady and very fan accessible.

And yes, I have pictures (i look brutal in these, sorry) 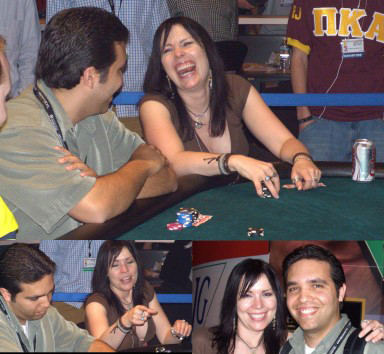 Great story, but the pics didn't come through!

sweetness more please...heh its going to suck when you run out of stories

Icemonkey i usually dont like reading long threads but i really enjoy your storys.
Kepp them coming!

Do u still cover the wpt?

I also met Annie, in Ottawa on a UB tour. She has a mad mind for poker math, thinks way ahead, and sparkly green eyes. She was vey inspring, and signed my shirt: 'Play Good. X O Annie Duke.' Now I can't wear or wash my shirt!!

Man WTF is up with picasa. So weird.

Are those dice chips??