Phil Hellmuth hit flop after flop on Wednesday, and he used that good fortune to down sports talk personality Nick Wright in Round 1 of his latest High Stakes Duel battle. The heads-up champ now must wait and see if his opponent wants a rematch. 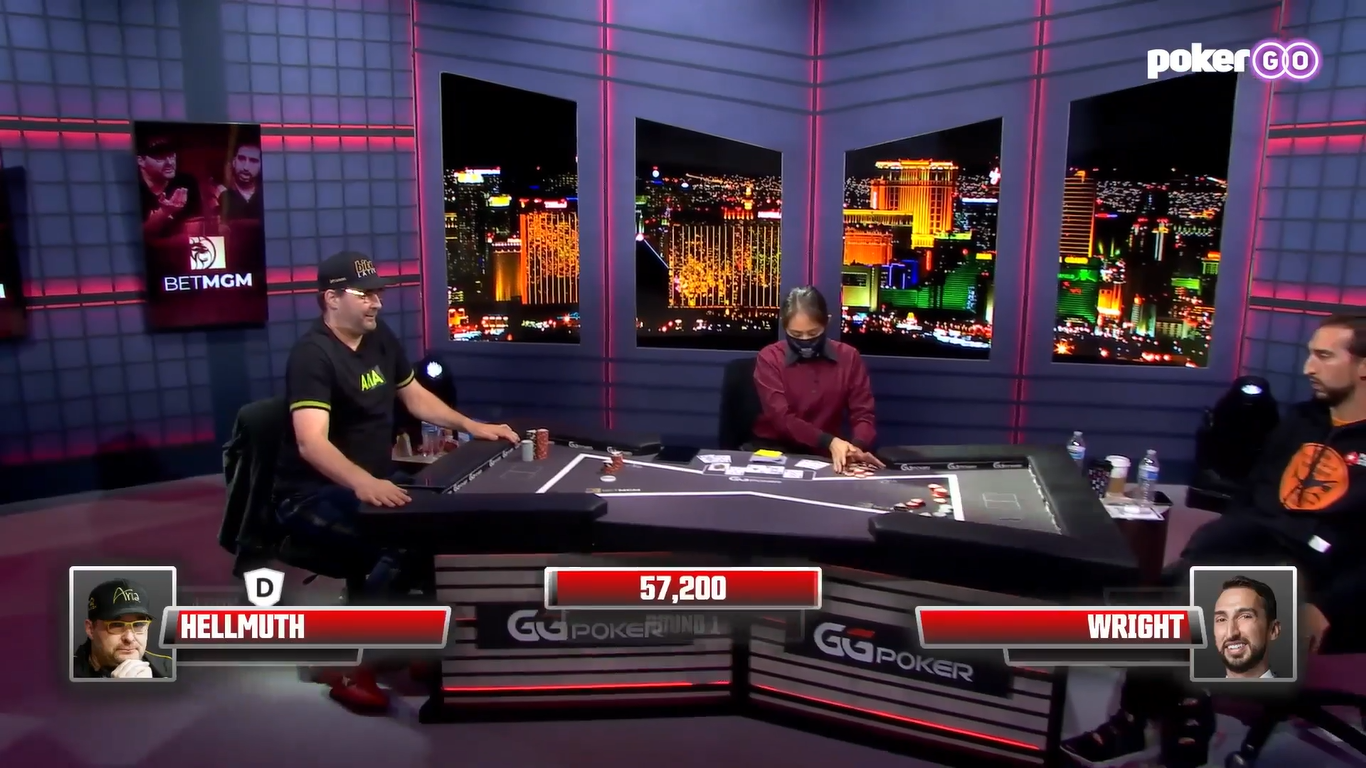 The marathon 5 1/2-hour match didn’t have many twists and turns. Wright got off to a hot start, using aggression to confuse the 15-time WSOP bracelet winner. And then, for the most part, Hellmuth wore his opponent down by repeatedly smashing the flop before, fittingly, finishing things off with a match-ending, flush-over-flush cooler.

On Wednesday evening, Hellmuth was “dazed and confused” by Wright’s aggressive play, he said afterward on PokerGO. Early in the match, the FS1 sports talk show host put his opponent on tilt and dominated play.

Wright, an amateur, was the early aggressor, firing off a plethora of bluffs, many of which got through. Hellmuth played passively during the first two 30-minute levels, which helped Wright take a sizable lead of just over 65,000 to 35,000 more than an hour into the contest.

The First Things First co-host had some pep in his step during the first few levels. He even taunted Hellmuth — who showed his usual bratty behavior when he’d lose a pot — by lying about his hand after getting the former poker world champion to fold. PokerGO commentators Ali Nejad and Maria Ho cracked up at Wright’s fabrications, but the constant speech play seemed to help him gain an early edge.

“This is my biggest laydown of the night,” Wright told Hellmuth after folding Q-2 on a 6-6-J-7 board, clearly posturing. “They’re probably up in the booth saying I’m not supposed to fold that.”

Nejad and Ho broke out into laughter in the broadcast booth. The speech play worked at times for Wright, but he wasn’t playing in his usual home game against amateur fish. He was up against one of the most experienced players in poker history, and Hellmuth began to pick off some bluffs and started calling Wright down light.

Two hours into the match, Hellmuth took over, thanks in part to hitting a number of monster flops. And also because Wright continually bluffed into his big hands. Over the next three hours, Hellmuth chipped away at his opponent’s stack before picking up one final lucky cooler.

Wright, in the big blind, had 7-6 of clubs and was up against 8-5 of clubs. Both players flopped a flush draw on a board of K-5-A. The turn was the 10 of clubs, giving both players a flush. Hellmuth bet out 2,000 and Wright opted to slow-play. On the river, which was a meaningless 8 of diamonds, Wright checked to set the trap, and Hellmuth bet 7,400. Wright then shoved all-in for 22,000.

Hellmuth, with the bigger flush, tanked for about 30 seconds before making the call to find out his flush was big enough. He finished off the nearly six-hour match and wrapped up his seventh win in as many tries on High Stakes Duel. Esfandiari couldn’t beat him, Negreanu couldn’t defeat him, and Wright was unable to conquer the poker legend.

“I can’t believe I lost that last hand. Phil played great,” a dejected Wright told PokerGO’s Jeff Platt in the postgame interview. “I played well for the first two hours, I played really, really badly for about an hour, I was clawing my way back from it. But the last one’s tough.”

Would rather play someone else

Hellmuth made it clear in the postgame that he has no interest in a rematch, but that decision isn’t up to him. Per High Stakes Duel rules, the winning player can’t cash out after Round 1 and must wait to do so until winning Round 3. If the Round-1 loser wants a rematch, the option is open. Wright wouldn’t commit to a yes or no answer when asked if he’ll take another stab at the 15-time WSOP champion.

If Hellmuth has it his way, Wright will decline the option for a rematch. He said during his postgame interview that the pressure is on him to beat an amateur and, that if he loses to Wright, he’d “lose some legacy points.” Instead, he’d prefer facing a high-profile, established poker pro such as Tom Dwan or Phil Ivey, both of whom are waiting in the wings to get into the High Stakes Duel mix. Still, Hellmuth complimented Wright’s performance.

“He had me dazed and confused, and frustrated,” Hellmuth said of Wright’s play. “Then when I watch the video next time, I’m going to see what he’s doing. I suspect that I’m going to end up bluffing a lot more in the next time.”

If there is a rematch, Wright is responsible for adding $100,000 to the pot, creating a $200,000 prize pool for Round 2. Should he decide to surrender, PokerGO will determine a new opponent in the coming weeks.