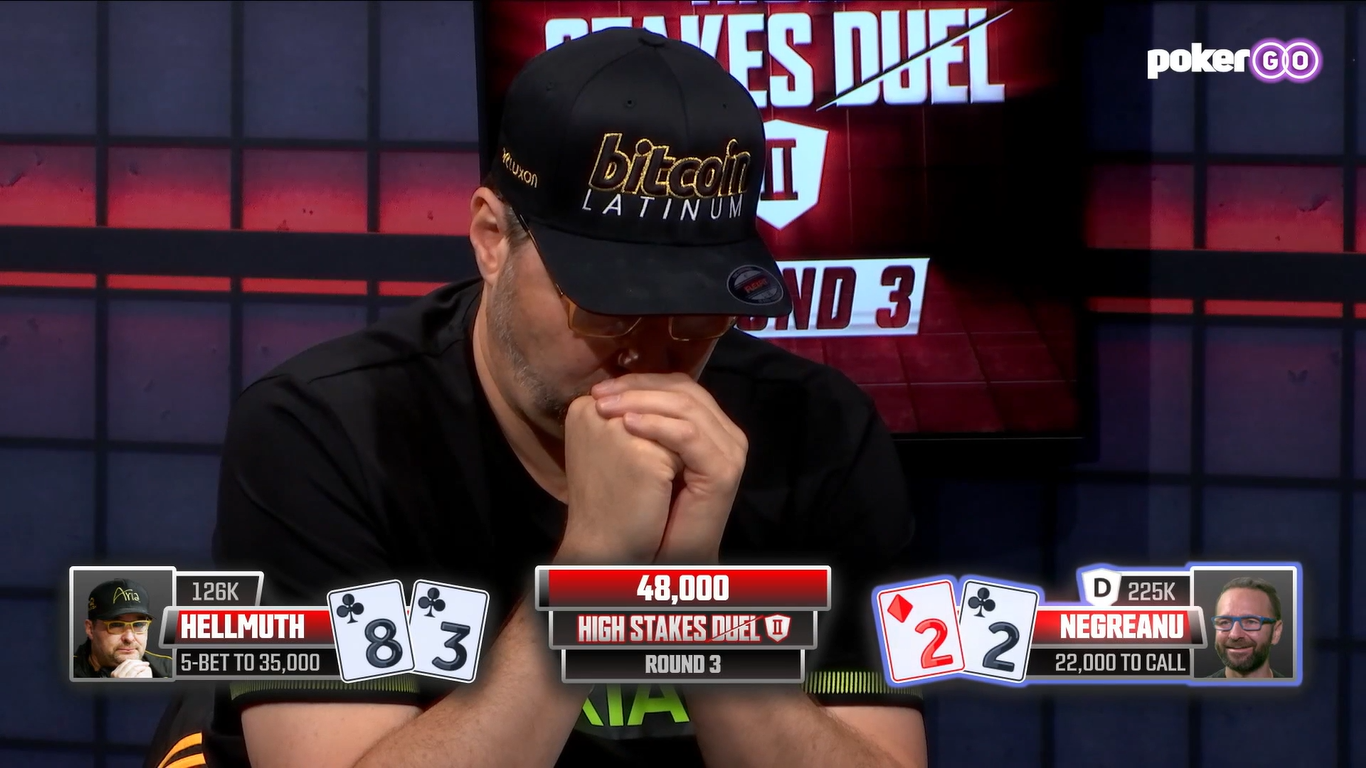 The match, which took place at the PokerGO Studio in Las Vegas and was available on tape delay on the PokerGO app, was quite a battle of wits between two legendary poker pros. Neither player appeared to be on tilt at any point, despite each suffering their fair share of bad beats and coolers. Even Hellmuth was a bit subdued compared to his usual bratty behavior following bad beats.

Hellmuth won the first match, a $50,000 a piece buy-in, in March after having trailed at one point more than 20-1. He came back for Round 2, where Negreanu was required to contribute another $100,000 to the prize pool, and was more dominant in victory this time around.

That set up Wednesday’s Round 3 match. Per High Stakes Duel rules, the losing player can no longer force a rematch following three straight losses. For Negreanu, that meant a loss in Round 3, would allow Hellmuth to cash out the $350,000 profit (Negreanu owed another $200,000 to enter Round 3) and move on to a new opponent.

Prior to the third game, both players announced on the No Gamble, No Future podcast that they would decline another rematch. Thus, the importance of a Round 3 win for both players.

In the early going, Negreanu hit a number of flops and gained a 2.5-1 chip advantage (both players began with 200,000 chips). That didn’t last long, as the GGPoker ambassador made a costly call with pocket nines in the most crucial hand of the day.

The four-bet preflop pot was already inflated when the flop came out 3-3-2, a monster hit for Hellmuth, who was holding Q-3. Negreanu bet out 7,000 and Hellmuth bumped it up to 25,000 and got a call. The turn was a 5 and Hellmuth moved all-in for 126,000. Negreanu went into the tank for a couple minutes before deciding he just couldn’t get away from his pocket pair. Both players watched a meaningless 10 hit the river, leaving Negreanu with around 45,000 chips (7-1 disadvantage).

For most of the evening, the breaks weren’t going Negreanu’s way. But he found some good fortune in a pair of wild all-in pots.

After battling back a bit to get within a 3-1 chip disadvantage, the former PokerStars pro went all-in preflop with two red kings. Hellmuth, however, also had a couple of kings in the hole. There wouldn’t be a chop in this pot, as four diamonds ran out, giving Negreanu a lucky double-up to a nearly even stack.

Hellmuth would again take over the match, winning pot after pot before Negreanu got lucky again. Hellmuth three-bet preflop with A-Q, and Negreanu went for a bluff, all-in jam with K-3 off-suit. Negreanu couldn’t force a fold, but it all worked out in the end for him when the board came out 9-5-Q-K-5, and he took down the 182,000-chip pot.

Cooler wraps it up

Negreanu got lucky in two all-in pots, but Hellmuth had the upper hand on good fortune overall. The GGPoker ambassador struggled mightily to hit his draws most of the night, whereas the 15-time WSOP bracelet winner seemingly couldn’t miss a draw.

On the final hand, both players hit a straight draw, except only one of them was satisfied with the outcome. Negreanu raised preflop with suited 6-5 and Hellmuth came along for the ride in the big blind with 10-6 of diamonds. The flop came out 2-7-9 with two diamonds, and Negreanu fired a bet and received a call.

Will Hellmuth ever lose?

With this victory, Hellmuth is now 6-0 on High Stakes Duel. He won three straight matches against Negreanu, and went three-for-three against Antonio Esfandiari in 2020.

Hellmuth made it clear earlier this week that he won’t call for another rematch and will cash out. So, he’ll soon face a new opponent. According to PokerGO’s Brent Hanks on the No Gamble, No Future podcast, the player waiting in the wings next is Tom “durrrr” Dwan, setting up a match that’s been in the making for 13 years.

In 2008, back when Dwan was the young hotshot from Full Tilt Poker, he sucked out with pocket 10’s, cracking Hellmuth’s aces, to bust him from the NBC Heads-Up Poker Championship. Following the bad beat, Hellmuth ripped on the young poker star’s play, to which Dwan pulled out some high denomination chips and uttered, “Phil, that’s why you lose online. Pick your stakes heads-up, pick your stakes heads-up.”

The match never took place, but it appears the popular poker pros will finally meet up for a heads-up battle on High Stakes Duel. No date has been set for the match, but when it happens, thousands of poker fans will be excited to tune in.