Phil Hellmuth used an unorthodox style of poker to once again beat his friendly rival Antonio Esfandiari on the new PokerGo show, “High Stakes Duel.” The “Poker Brat” made numerous questionable decisions during the match but, in the end, he did the only thing that matters — win. 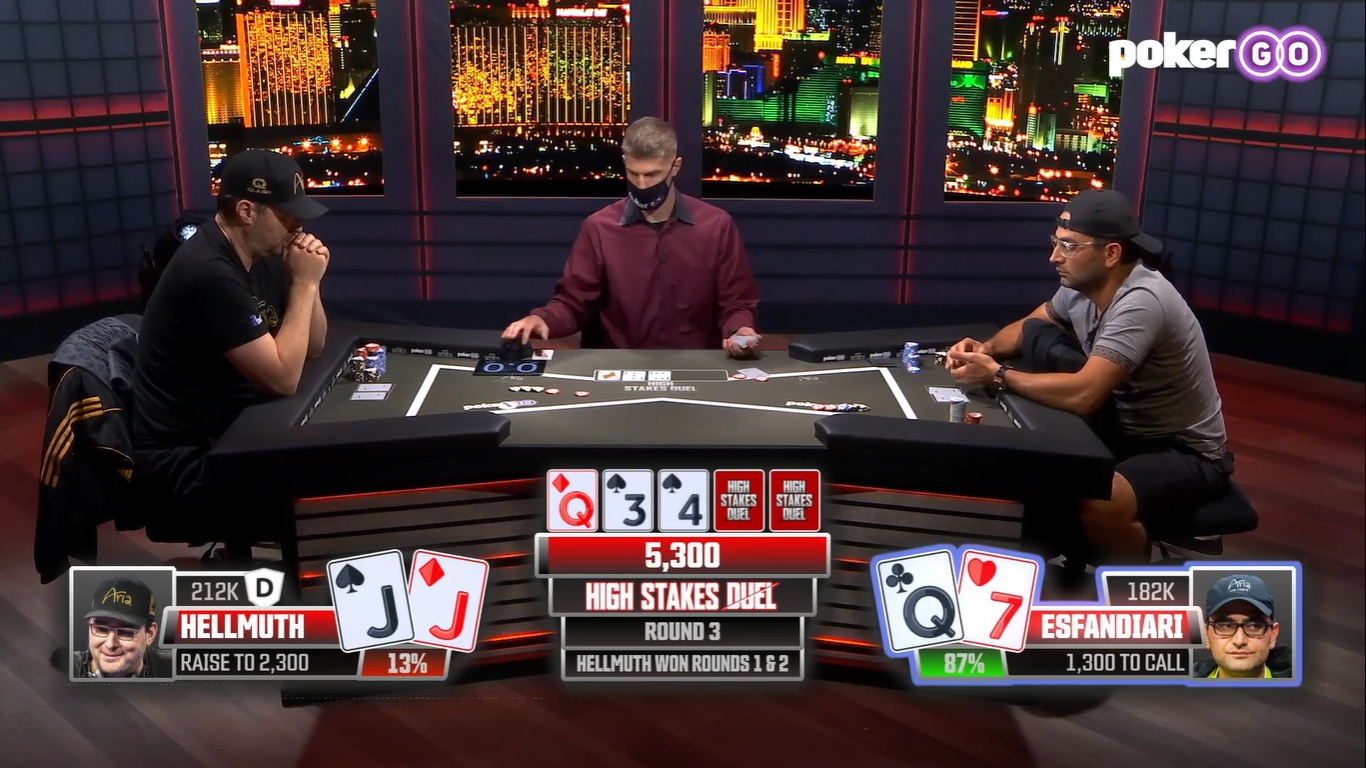 Phil Hellmuth made some weird plays, but he still won again. (Image: PokerGo)

Hellmuth won the first two matches — one in August and the other in September. Esfandiari kept challenging him to a rematch, but lost three-in-a-row.

In the first episode of “High Stakes Duel,” both players paid $50,000 to enter. This would be Hellmuth’s only deposit. Per the show’s rules, the loser can then challenge the winner to a rematch and put in another $100,000 to the pot, which Esfandiari did. After losing a second straight time, he re-bought for another $200,000, creating a $400,000 prize pool in the third match, which he lost again.

This time, however, Hellmuth is done and won’t accept a rematch. The rules permit a player to cash out after winning three matches. So, he’s up $350,000, and Esfandiari is down the same amount.

Should the 15-time WSOP bracelet winner decide to continue on in the show, he’ll face a new opponent in the future. Dan Smith, Bill Perkins, Phil Ivey, and Bryn Kenney are all waiting in the wings to get some action. Round Two opponents will be announced at a later date.

Hellmuth doesn’t play a conventional style of poker. He never impresses the GTO-minded grinders with his “White Magic” strategy, but he keeps on winning.

On Wednesday, PokerGo viewers were treated to a second rematch between two of the most popular poker players ever. They weren’t, however, treated to a clinic on heads-up poker strategy. Doug Polk likely won’t use the film from this match to help him prepare for his battle against Daniel Negreanu.

Hellmuth made some strange plays throughout the evening. Even PokerGo commentators Ali Nejad and Nick Schulman were baffled by some of the decisions he made.

Four times during the match, Hellmuth limped in pre-flop with A-Q, an unconventional play, to say the least. He limped with pocket jacks on the button in another hand and then, for some reason, went for a raise on a flop of Q-3-4. Esfandiari held Q-7 and wasn’t going anywhere.

Twice in the match, Hellmuth went for a raise on the river with top pair and a weak kicker, a play that might confuse the GTO-minded pros. But, hey, it worked out well for him against Esfandiari.

Hellmuth also made a couple of questionable folds pre-flop. He laid down Q-J to a three-bet (Esfandiari had pocket fives), and K-9 to a three-bet in another pot. Those are some fairly strong heads-up hands, which the commentators explained.

The long-awaited heads-up battle between Hellmuth and Esfandiari is now officially over.

i think the whole series of challenges was a publicity stunt