Did Phil Hellmuth Shoot an Angle at Table Full of Superstar Streamer Newbies?

The chips were certainly flying in an action-packed, high-stakes game on “Hustler Casino Live” on Sunday that featured some of the biggest Twitch and Youtube personalities in the world. The game included one player who lost over a million dollars, and as is usually the case when Phil Hellmuth is at the table, plenty of antics and controversy. 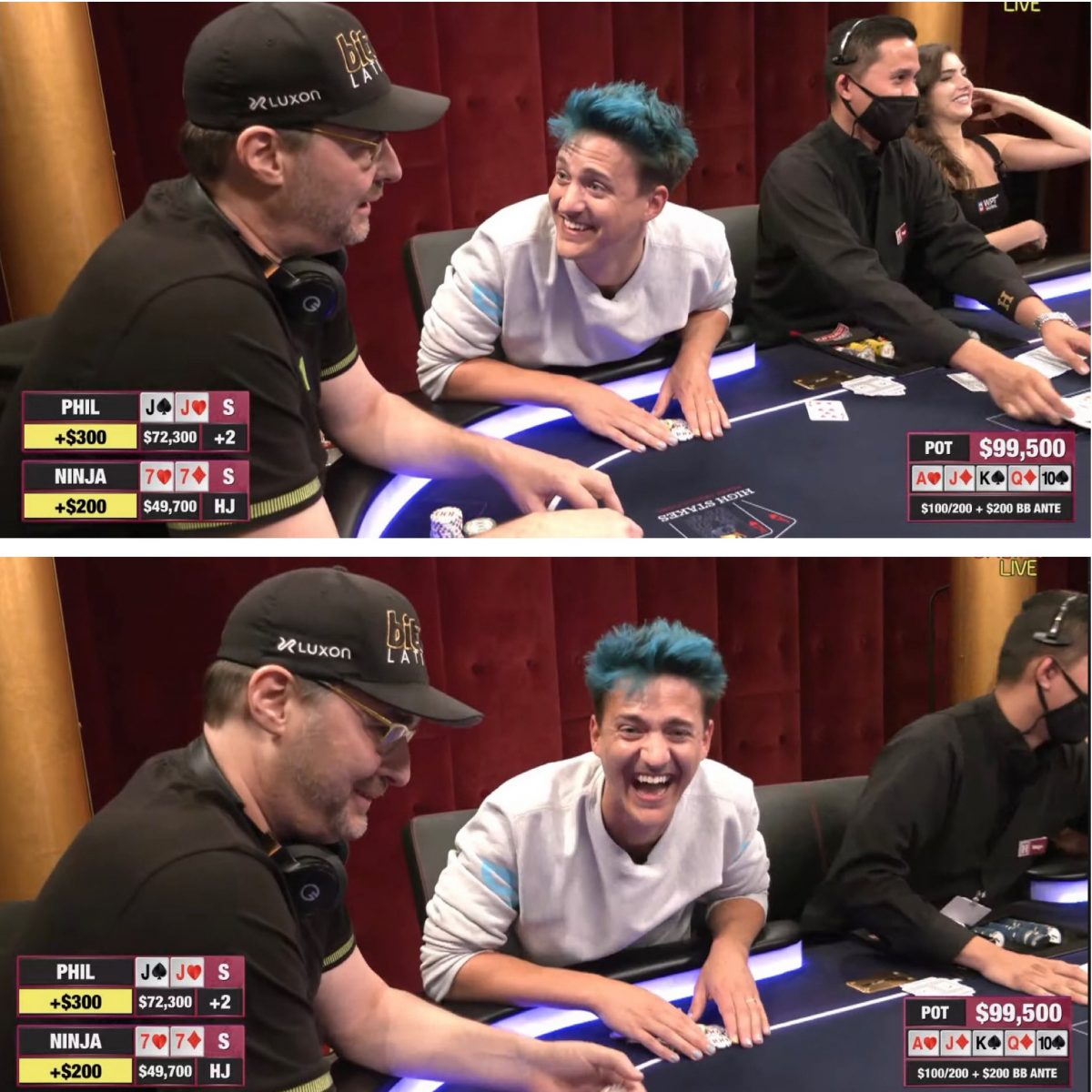 Twitch streamer Ninja gets lucky for a chop in a big pot against Phil Hellmuth. (Image: Twitter/HustlerCasinoLive)

The $100/200 game featured some massive stars in the poker world and online entertainment. The headliners were MrBeast, a YouTube sensation who is known for his incredibly elaborate videos and his burger chain, MrBeast Burger, and Ninja, arguably the most famous video gamer and streamer in the world right now, and certainly in the last few years.

There were two poker pros who joined the table full of mostly amateurs with deep pockets. High-stakes poker legend Tom “durrrr” Dwan was there, but he was card dead most of the night and wasn’t involved in any of the big pots. The other poker pro, the aforementioned Phil Hellmuth, was at the center of the action — and controversy — throughout the night.

The first incident and, undoubtedly the most talked about, took place between Hellmuth and noted Twitch streamer Slime, who was open about the fact that this was one of his first times playing live poker. The two played a hand where both players flopped top pair with aces, and Slime shoved on the flop. Hellmuth appeared to fold his hand, which led to Slime showing his weaker ace to the table. However, upon further inspection, (it starts at 0:22 on the video below), you can see that Dwan reaches across the table and asks to take a look at the hand, which led to Hellmuth’s perceived fold. Ultimately, Hellmuth took just $5,000 extra for the mistake, rather than the full stack, but many viewers took to Twitter and slammed Hellmuth for what appeared to be angle shooting. 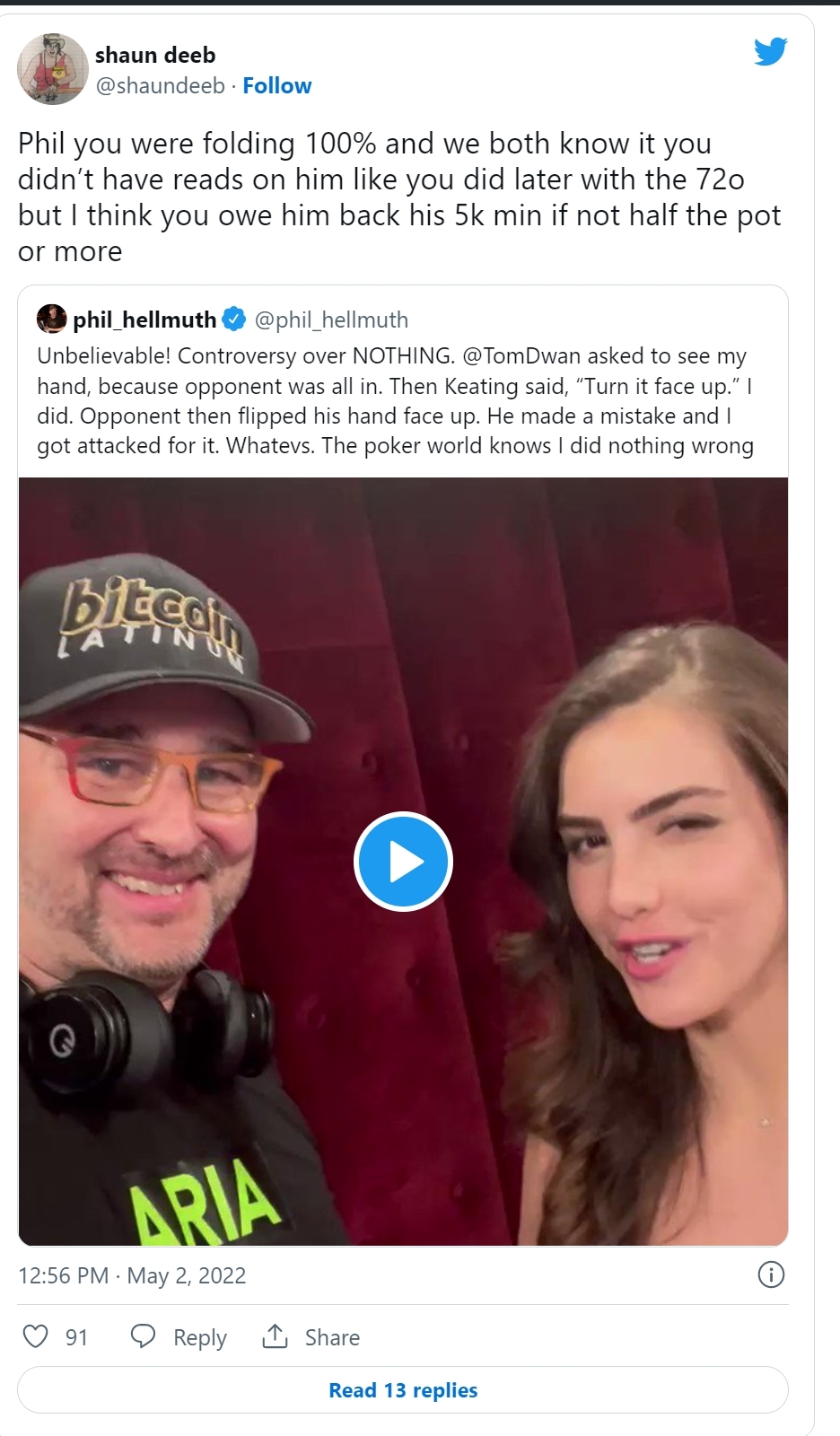 Hellmuth continued his ranting throughout the night, using some of his usual antics of whining and complaining, quickly becoming the table villain. This showed itself in another moment later on when the whole table was thrilled to see MrBeast extract maximum value with a measly queen-5 against Hellmuth’s pocket nines. 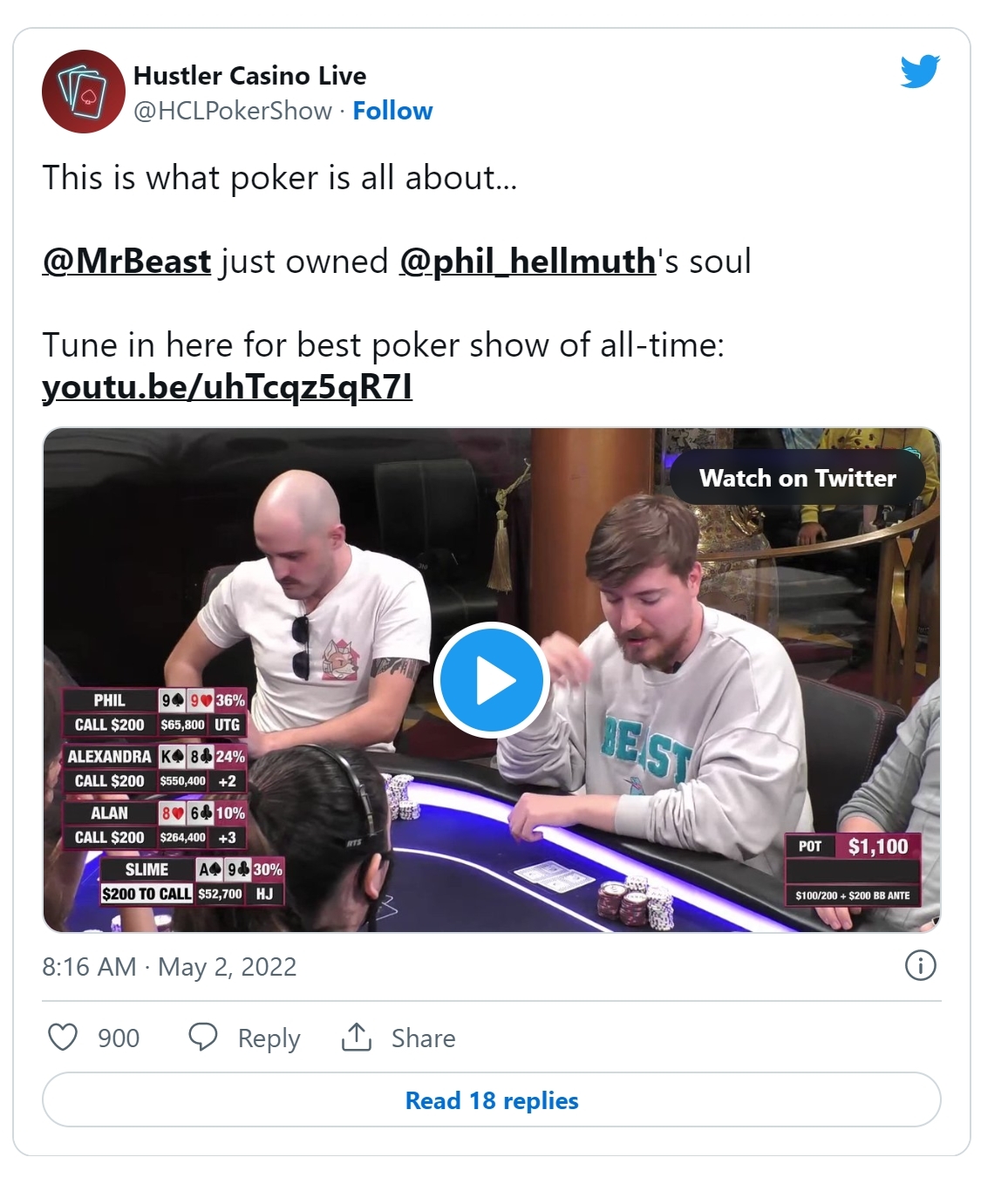 Hellmuth’s last memorable moment of the night came in a big hand against Ninja where the two got it in preflop in a $100K pot, with Hellmuth holding pocket jacks against pocket sevens. Hellmuth would flop a jack, but the board ran out a broadway straight for a chopped pot, sending the room into a frenzy. It also produced this one-liner that will likely be quoted for years. Hellmuth took to Twitter after the game to defend himself and his actions in the first controversial hand, but many people weren’t having it. CourageJD, another widely popular Youtube gamer who is good friends with many of the players who appeared on the show, went to his Twitter to rant about Hellmuth and his antics. Big winners of the stream

Lost in all of the night’s controversies were the big winners and losers for the session. Alan Keating, a high-stakes cash game player, has been on the Hustler stream before, and plays an active aggressive style that didn’t pay off on Sunday night; he took an absolute beating, finishing the session down more than $1,1 million.

The night’s big winner was the lone woman at the table, Alexandra Botez, a childhood chess prodigy from Canada who now runs a successful Twitch channel based around chess and chess players. She won $457K on the night, while fellow entertainers MrBeast and Ludwig won more than $400K each. 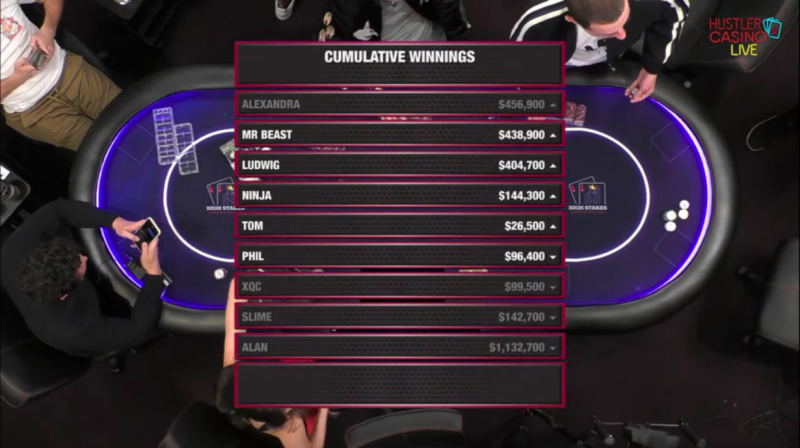 “Hustler Casino Live” was another big winner on the night as the stream peaked at nearly 30K concurrent viewers, while Ludwig, who was also streaming the show on Twitch, appeared to get nearly 70K viewers on his channel. After the game, Ryan Feldman, the stream’s co-creator tweeted his excitement about how far the show has come in a short time. But, they were that funny becaus of what had happenned earlier in the previos two videos.

I’d like to say I feel for Hellmuth, but I can’t, because I don’t, not one bit.