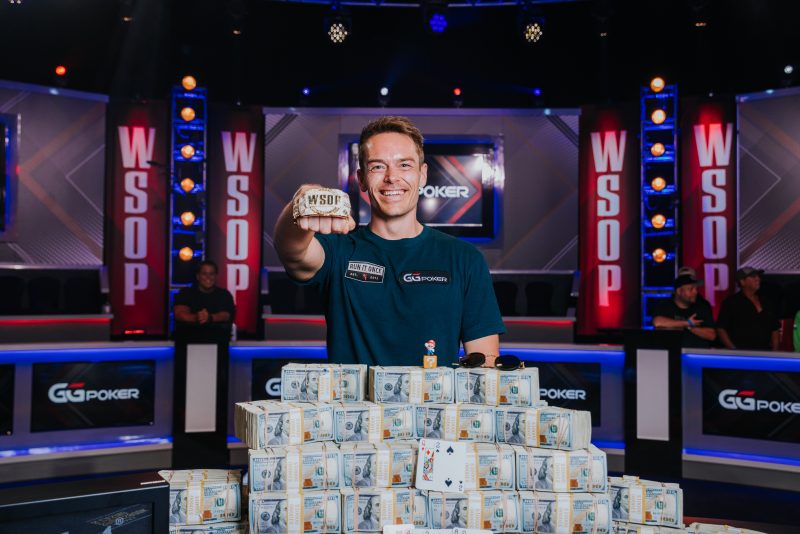 The first thing he did was call his mother.

“She was instantly in tears,” Jorstad said. “I think she was already crying just watching it. She was so nervous, you know, way more nervous than me. It was very emotional hearing her, how happy she was.”

Jorstad, 34, is the first Norwegian to win the Main Event. He won his first bracelet earlier this Series in the tag-team event with partner and fellow streamer Patrick Leonard. He’s a professional poker player, Run-It-Once coach, and Twitch streamer. He used to be an ambassador for the online site Unibet.

He’s also one of the many players who had to spend a week isolating in his hotel room this Series after a positive COVID-19 test.

He began final three-player play as a 2-to-1 chip leader against Adrian Attenborough, and 4-to-1 against Michael Duek with 99 big blinds.

But Attenborough closed the gap with Jorstad only 10 hands in when he eliminated Duek after hitting a straight on the river holding AJ. The 23-year-old Argentinian, who lives and plays professionally in Florida, won $4 million for third.

The first heads-up hand lasted a poker eternity after Attenborough went into the tank for 20 minutes while contemplating calling a 133 million bet with J4 with a board of 8TK48. The pot was 335.5 million.

Jorstad remained statue-still the whole time while Attenborough twisted in the wind until properly folding.

The tank heard around the world.

Espen Jorstad strikes first in heads-up play after moving all in on the river and putting Adrian Attenborough in the cage with his bluff catcher.

“How long was he tanking?” asked Jorstad, according to the WSOP. “It felt like an eternity. I was trying to focus on my breathing, did some meditation. You focus on different body parts, focusing on each finger and just chilling in my zone.”

Poker in 2022. Heads up in the main event I tune in for hand 1. I watch 1 min of hand. Neighbor comes and has me help move a couch down the street to another house. I Come back in the house and the hand is still going…

Attenborough got back to nearly even the very next hand. Heads-up play went on for less than two hours until J4 came back to haunt him again.

In a limped pot, the Jorstad had Q2 against another J4. The flop came 422. Attenborough raised 4 million, Jorstad re-raised to 32 million, and was called.

The turn came an eight and Attenborough called another 62 million after checking.

A queen on the river sent all of Jorstad’s chips into the middle. It took nearly 10 minutes before Attenborough called, only to see he was dominated by the full house.

Today was a very good day! 🥳

Tyvm for all the support and lovely messages. Truly appreciate it a lot! ❤️ pic.twitter.com/IaHS174Tt5

In the post-match interview with WSOP, Jorstad said he plans on using the big pay-day to get into the High Roller tournament world.

“My goal has been to reach into the High Roller scene and play more $25K tournaments and stuff like that. I’ve dipped my toes, but now I have a bigger bankroll to take some shots in those tournaments. I need to get in the lab and make sure I’m good enough to play them.”

The victory vaults Jorstad to the top of Norway’s money list. Felix Vincent Stephensen is now second with $5.85 million, in front of Annette Obrestad, with $3.9 million.