Damian Salas defeated Joseph Hebert in a marathon heads-up match to win the 2020 WSOP Main Event title and an extra $1 million in cash. The champ also takes home the coveted gold bracelet and is officially the reigning world champion of poker. 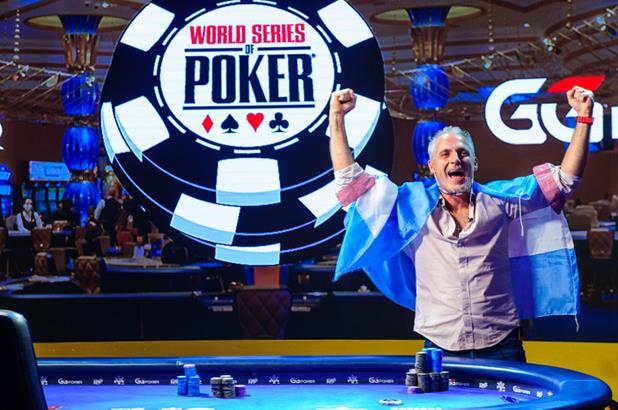 It took more than five hours for Salas to finish off his opponent. Even when the blinds got so big that there weren’t many decisions left to be made, play continued for quite some time. Neither player was willing to give in as there was so much riding on this match.

Both players had already won just north of $1.5 million for beating their respective final tables, but they each were chasing that extra $1 million paid to the winner of Sunday’s heads-up finale. The player who would lose the heads-up match would receive nothing beyond the $1.5 million already won.

Hebert reached the heads-up finale by defeating the WSOP.com final table at the Rio in Las Vegas last week. He sucked out against Ron Jenkins on the final hand with A-Q against pocket queens. Ironically, that same hand would come back to haunt him on Monday.

Damian Salas, on the other hand, took down GGPoker’s bracket of the 2020 WSOP Main Event. He had some travel issues getting to the US from Argentina due to COVID-19 restrictions, but he eventually made it to Las Vegas for a delayed heads-up finale.

Salas is no stranger to the WSOP Main Event final table. In 2017, he finished ninth for $1.4 million. He was given a second shot at glory this year and made the most of it.

The heads-up match against Hebert lasted over five hours and was highly competitive. For the first couple of hours, there wasn’t much movement either way. Both players held small chip leads numerous times. One player would raise pre-flop and take it down on the flop, or raise pre-flop and get a fold. There weren’t many action hands for quite some time.

Hebert would pull further ahead before running into pocket 10s with K-9 (all-in pre-flop). The best hand once again held up, and Salas was back up to 268,000 chips. He was still in a deep hole, however. The Argentinian then took over, pulling out his own big lead before losing a massive pre-flop all-in hand with K-J against the better K-Q (board came 2-8-5-7-6).

That gave Hebert a 3-1 chip lead yet again. At this point, the blinds were so big that both players were in a fold or shove mode. Late in the match, there were less than 20 total blinds in play, but neither player was ready to just go all-in in an effort to end the match. There was too much at stake ($1 million versus $0).

And with that, we finally have a 2020 poker world champion, nearly six months late.