My apologies dear reader, this last week has been a mess. I had planned — and continue to plan — to offer up these reports on the happenings at the WSOP three times a week. But no plan for battle survives first contact with the enemy, and in this case, the enemy was COVID-19. 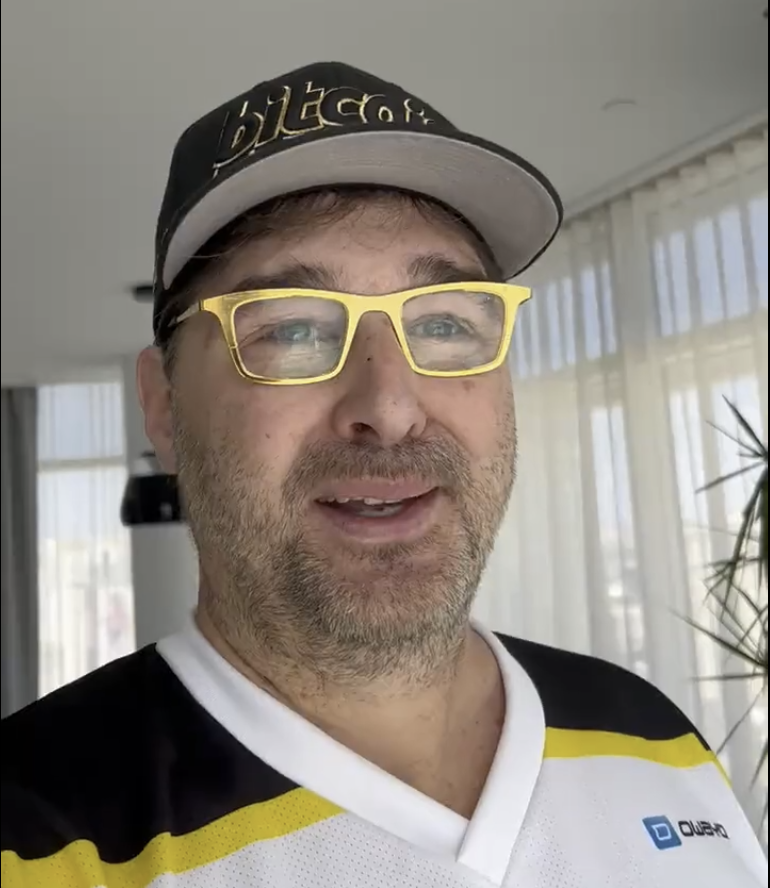 Phil Hellmuth was all about #Positivity until it came to testing for COVID. He is just one of the big names to come down with a case of the pandemic at this year’s WSOP. He’s quarantining in his suite at Aria and has yet to play a hand at this year’s series. (Image: Phil Hellmuth/Twitter)

I noticed a sneeze and a sniffle four days ago and came home from Bally’s right away, not sure if I was even getting sick because I also have frequent allergies. The next day, I woke up feeling rough and knew that I was going to get sick, but a COVID test came back negative. A day later I was miserable, but still a negative test. I figured it must be a nasty flu.

Then, on Thursday night, the test came back positive, and by then, I was feeling terrible. And, my wife has it as well. In fact, it seems like everyone has it. I interacted with Phil Hellmuth the day before I started feeling rough, and he tested positive the next day. I was exposed as far back as May 28 when I sat across a table from Lon McEachern during a press conference. And, so many other players have reported positive tests lately that I could have gotten it anywhere.

Not a great week for the fox…

The WSOP feels like a massive COVID incubator right now. I counted at least 30 players who have reported positive tests, which probably means hundreds that have either kept it a secret and played anyway, or quietly stayed in their hotel rooms for a few days. Many more were in the middle of an event and didn’t want to get tested.

If that means that we have a few hundred players who have COVID this week, then we can assume that with table changes and contact in hallways and at restaurants, a good percentage of players are being exposed every day.

That search also brings up dozens of players who are canceling trips out of caution because they are hearing so many stories of people getting COVID. No one wants to plan, and pay for, a whole trip and then spend it quarantining in a cheap hotel room. David Bach stayed away last week, and Doyle Brunson says he’ll stay home this year for the first time in 50 years.

Even Doyle is worried.

Clark County reported on Friday that the COVID threat level has been moved to “high” for the first time in over a year. The new Omicron variants combined with the WSOP and hundreds of thousands of people attending the EDC (Electric Daisy Carnival) probably have a lot to do with it. And frankly, there’s only one reasonable solution to this problem.

I know you don’t want to hear it, and nobody loves the idea. It won’t be popular, and a certain crowd that I won’t name specifically, will lose their minds over the idea, but if we don’t take drastic measures, people could die. So, in the name of safety, I think we need to cancel the EDC for the next few years, just until we can get this thing under control.

I know, seeing those good-looking, half-naked, drug-crazed 20-somethings stumbling around the Strip is fun. And yes, I did have a bet with my editor that I could hyphenate four words in a row and make it still read naturally. We all enjoy the ravers and their antics, and they don’t hurt anyone, but this is a serious matter. We have poker to play.

As for me, I have pictures to take, cash games to crush, and articles to write. I can’t be home sick right now, especially with my wife sick at home as well. There’s literally no one to listen to me whine about how miserable I am. The whole situation is untenable.

Before the COVID got me, I did manage to visit a few other locations and get some good pics. Let’s start by taking a look at the card room at the Sahara. I had never been to the room, but now I wish I had gone sooner. It’s a really nice little poker room with a friendly staff in a nice casino. 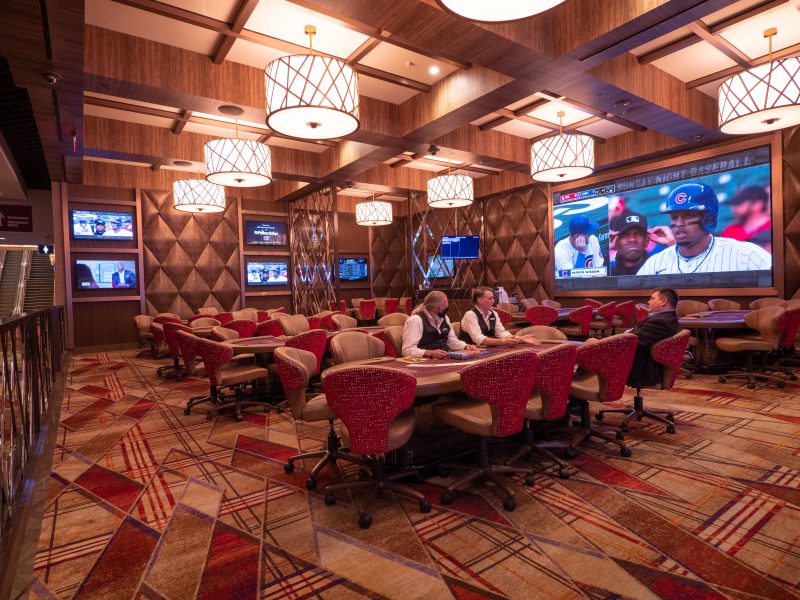 The Sahara has a beautiful card room just waiting for players to come in and enjoy the most comfortable chairs in the city. (Image: Chris Wallace/CardsChat)

My intention was to drop by a meetup game with some writers and vloggers that was happening in the poker room. I wasn’t sure I could make it, so I told them not to put me on the list, but that I might drop by if I could. I guess they took that as a hard no, because when they canceled the game (because of COVID, of course) no one told me, which was probably for the best because I got to chat with a couple dealers and the poker room manager who told me the room has dropped the rake to a $4 maximum, which is very good for Vegas and will absolutely shock anyone who plays regularly in California.

Once the WSOP is over, I may start a mixed game there once or twice a week and see if I can get some people interested in a TORSE mix or something. I would like to see the room survive because, if we don’t have enough rooms competing for our business, we’ll see rake in Vegas climb right up to Southern California standards. Competition is healthy and we need to support rooms that treat poker players well. And, the Sahara happens to have the most comfortable chairs in the city.

My new book on HORSE

Speaking of mixed games, my big project for the week, which was really tough to do with COVID-induced brain fog, was the publication of the mixed-game book that’s taking the world by storm, Getting Started With HORSE. That’s right, I wrote a book on mixed games and it’s out now.

I didn’t write it by myself, though I have more than enough credentials to do so after winning the $10K HORSE bracelet in 2014 at the WSOP. No, I wrote it with two of the most accomplished mixed-game players of all time, the Mizrachi brothers, Michael and Robert. Between us, we have 10 non-Hold’em bracelets, six non-Hold’em world championships, and more than $27 million in tournament winnings.

I suppose I should have led with that huh? I mean, I really want people to read this book, so I should probably have started with the announcement and then done the COVID stuff, and then the hilarious joke about canceling EDC later in the post after everyone had already clicked the link and bought the book. Anyway, I’ll talk more about that in Fox Report #4 – Fox Wrote the Greatest Book Ever.


Scenes from the WSOP: Two weeks in

That title is subject to change by the way. I haven’t sold my editor on that specific wording, but I think it has a nice ring to it. Also, here are a bunch of pictures I took last week. I’m feeling a bit better already, so hopefully, I’ll be back soon.

Until then, enjoy this week’s pic dump. 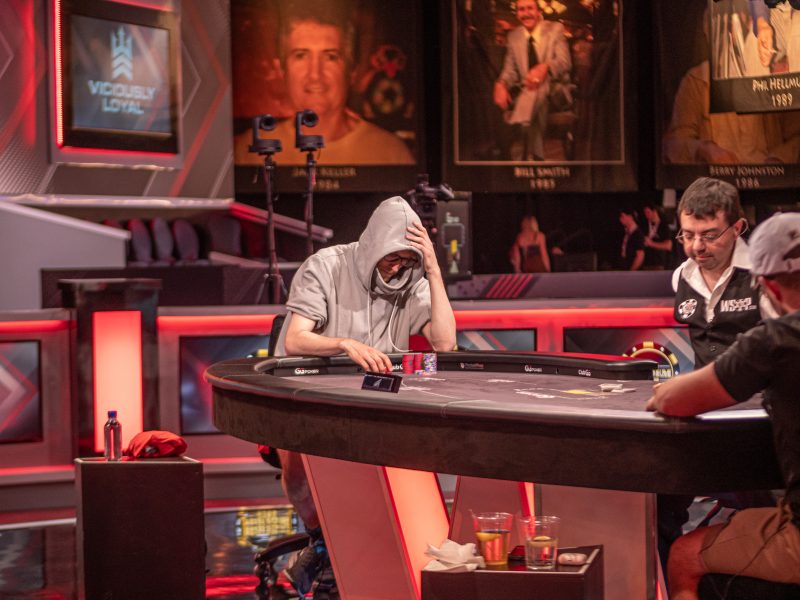 Christoph Vogelsang caught a lot of flack on Twitter for what people saw as excessive tanking in his heads-up match against Dan Smith. (Image: Chris Wallace/CardsChat) 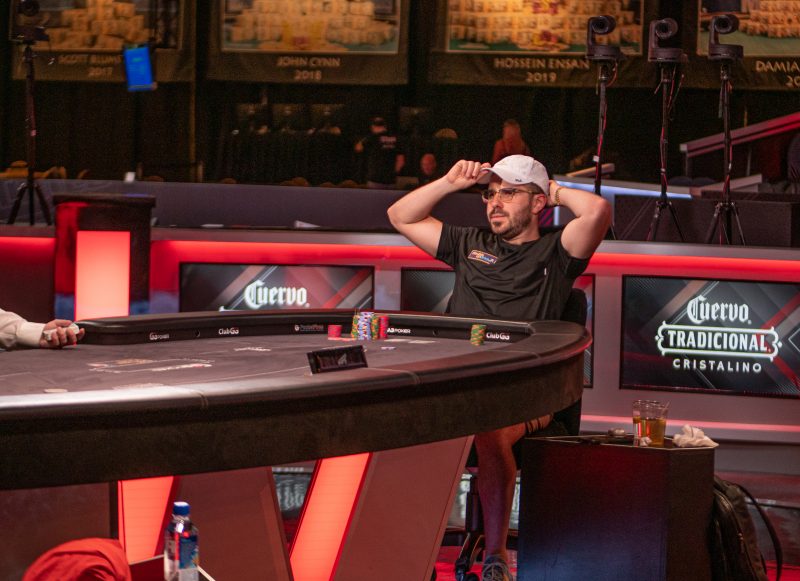 Dan Smith is a very popular guy and the poker world was ecstatic to see him finally get a bracelet when he won the $25k Heads-Up Championship. (Image: Chris Wallace/CardsChat) 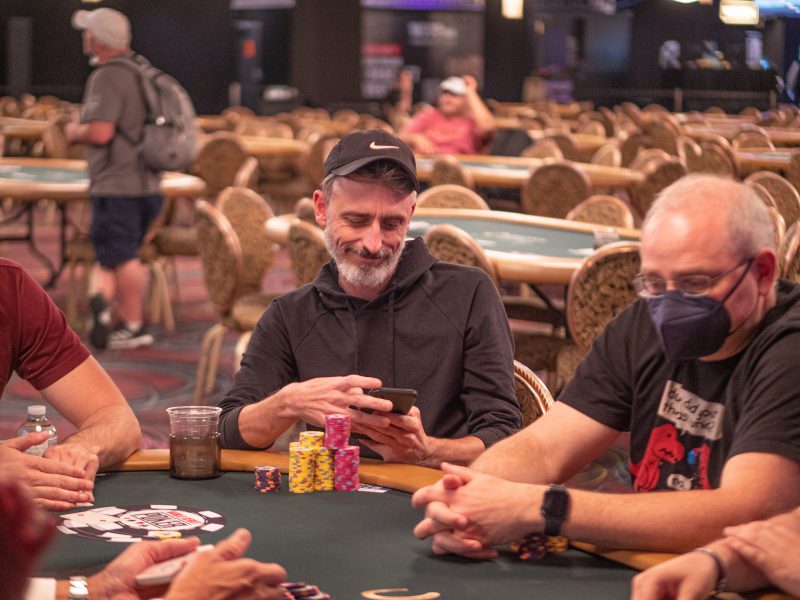 Looks like someone got a new match on Tinder. (Image: Chris Wallace/CardsChat) 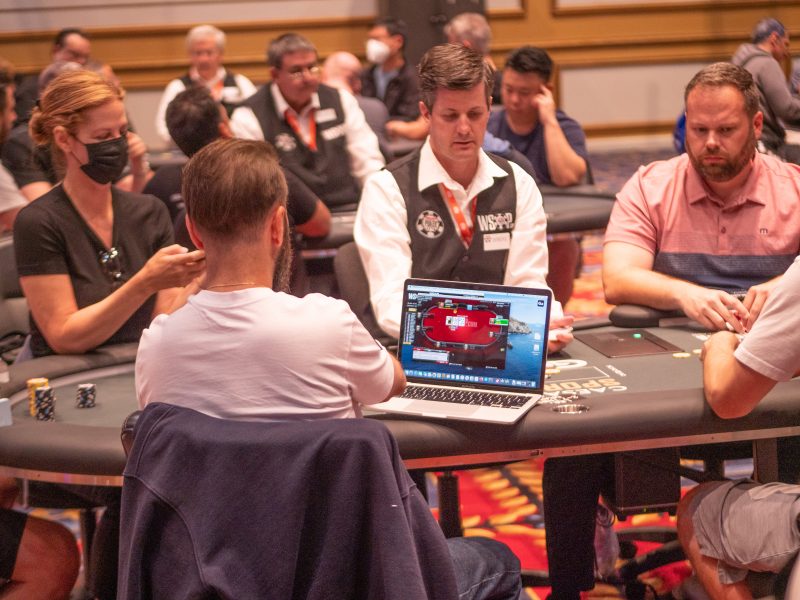 We can see his cards! Negreanu was one of many pros playing poker simultaneously in live and online bracelet events. (Image: Chris Wallace / CardsChat) 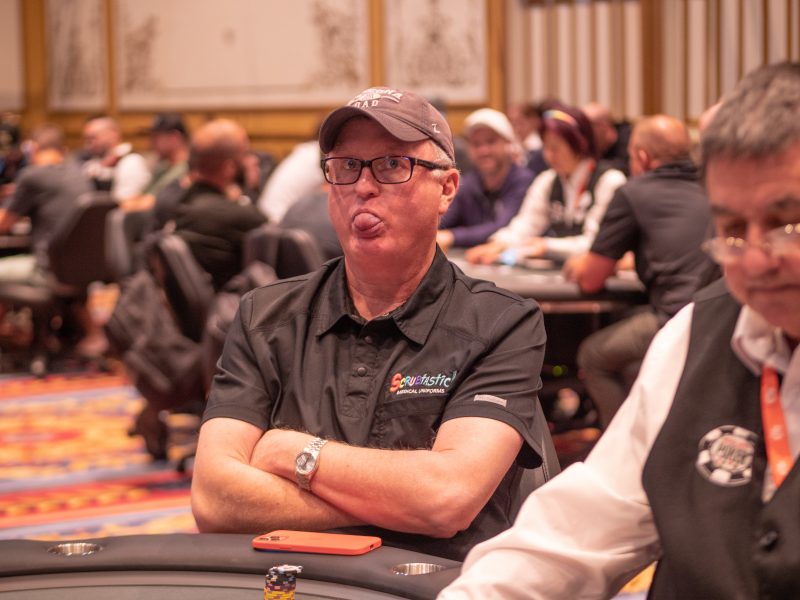 Frank Kassela did this with his face when he was six and it actually stuck that way. (Image: Chris Wallace/CardsChat) 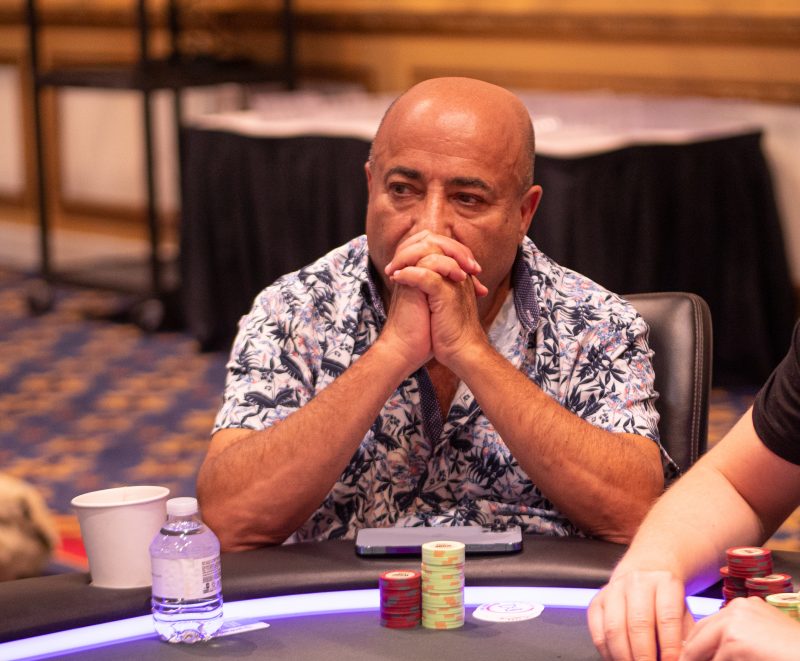 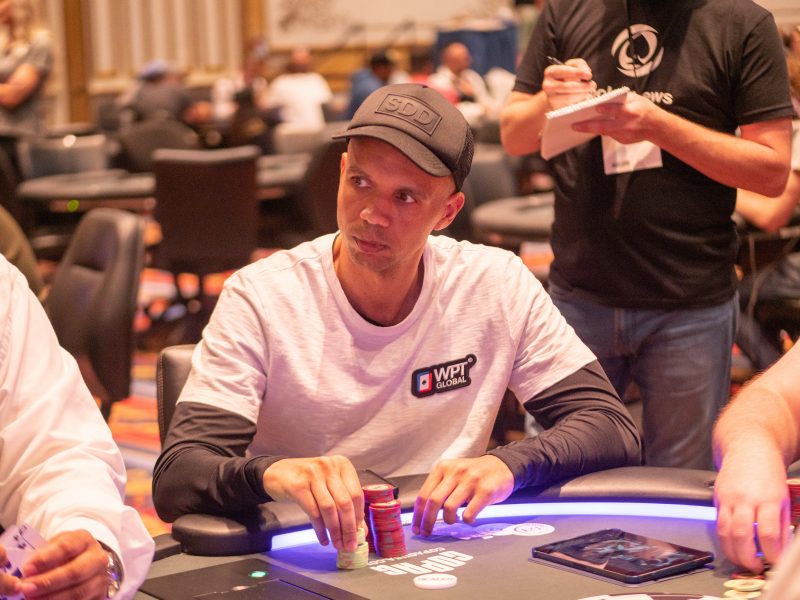 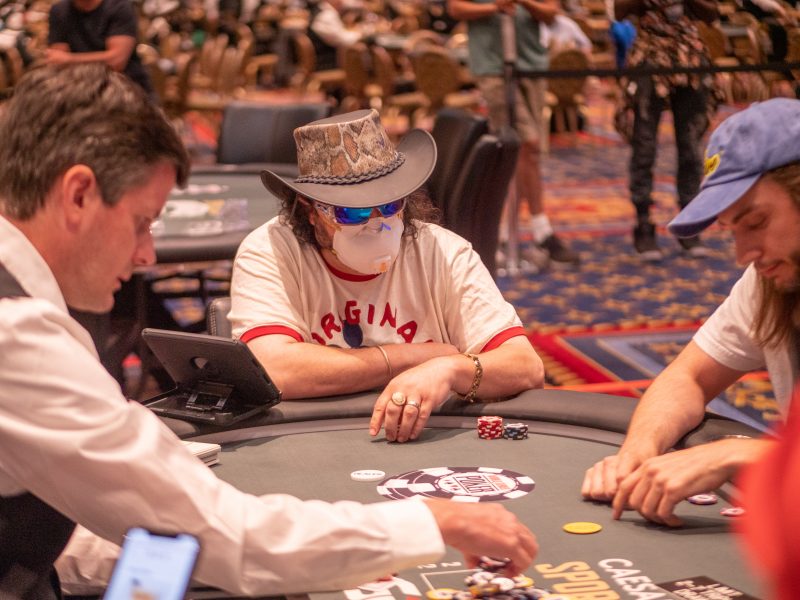 David Bach played in a few early events, but has stopped playing for now because of the number of Covid cases at the WSOP. (Image: Chris Wallace / CardsChat) 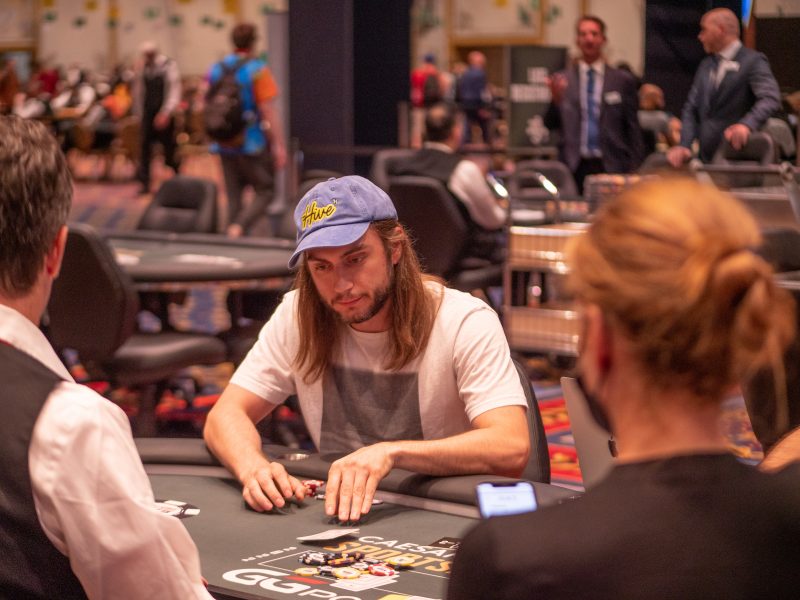 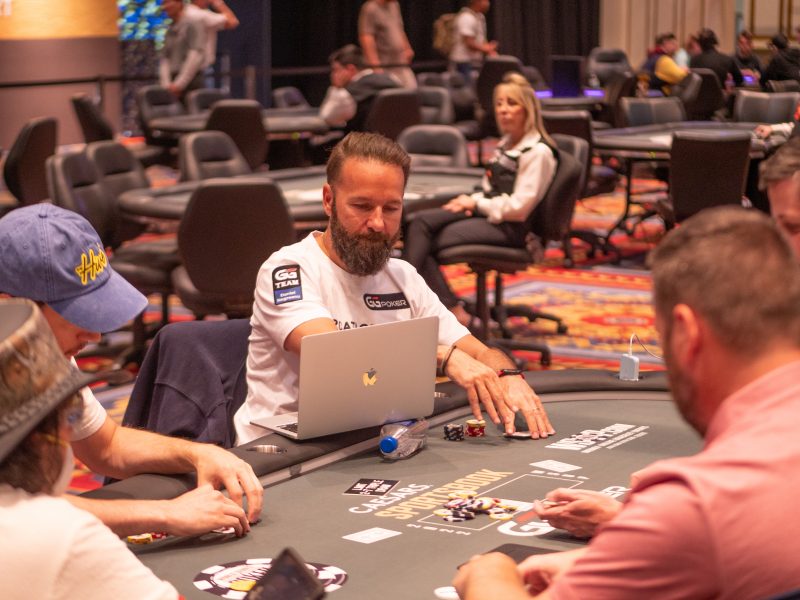 What do you do when you have a hand in both games? (Image: Chris Wallace / CardsChat)

Hi Chris. I was hoping that you and I could meet while I was up there to play Event 18 of the WSOP, but you were laid up. I hope that you’re getting better and that your wife is too. I started feeling a scratchy throat on Friday morning after playing poker on Tuesday and Thursday. Got back to the LA area on Saturday and got tested for Covid yesterday and yep, I have it. Ugh. Not the way I wanted to miss another week of work. It’s like having an annoying cold. 🙄

Hi Chris, That explains why I never heard back from you. I am so sorry you caught this blasted virus. Just had it to and its not fun. Hope you feel better and hope to tun into you as the WSOP, Im playing event 42.