Log in
Register
Search
Install the app
You are using an out of date browser. It may not display this or other websites correctly.
You should upgrade or use an alternative browser.

I posted this to one of the debates in the thread below about whether or not to take coin-flips or gamlbe earlier on, but thought it would probably get lost/overlooked.

It is a short article but should help explain why certain moves at certain times are more profitable...

Many players seem to be caught up on the notion of when and when not to take coin flips or 60-40 situations in tournaments. While there isn't a concrete answer to this question, there are three certainties in life: death, taxes, and the need to win flips to win a tournament. The only real question to ask is not one of if, but when. 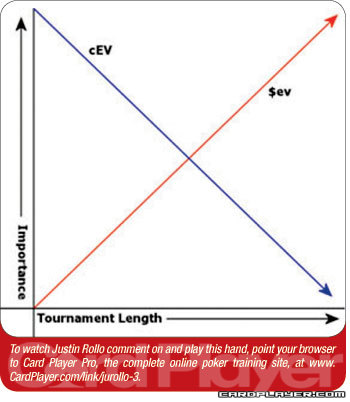 When you are early in a tournament and are facing a situation in which you are likely 50-50 and have already put chips in, you are usually in a positive ev situation when calling. Therefore, based on this chart, I would likely be taking these risks early while not taking as many of them late. Taking 50-50s late creates large variance in your overall $ev, which is most important late in tournaments.

Let's say that you have A-K early in a tournament and open for a raise, and then face an all-in bet by a villain who shows J-J faceup. I am more likely to make this call based on the fact that I have already committed chips and will likely show a profit based on the pot odds I am receiving. Now let us make this same hand the first hand of a final table, with the disparity between ninth- and first-place finishes. Assuming that I have an edge at the final table, I will fold the A-K many times, because I am generally not gaining enough $ev from the play, even though it might be barely a positive cEV. The times I lose, in general, cost me more money in the long run than the amount I lose when losing the flip (the difference between ninth and, say, third).

Another good example of this topic would be if you have 12 big blinds and a stack of five big blinds pushes on you in the big blind. Generally, you would be getting more than 2-1 and should be making this call with any two cards against a normal villain, as having one live card gives you sufficient odds to call. However, now let's say that this situation happens with seven players left in a tournament, two of whom are also very short. When we look at the $ev, it now becomes a fold, as gaining the four big blinds available likely gains you little to no money long term, whereas waiting for a slightly better spot to get chips in the middle benefits you far greater in terms of $ev.

In one of my recent videos, a hand came up that illustrates this concept:

I held A-K late in a multitable tournament and opted to fold to a raise and a reraise preflop, because when factoring in player images and table position, I could be extremely confident that I was flipping a coin, at best. While I may happily four-bet early on in a tournament in this situation, the effect of taking this gamble in terms of $ev at the final two tables simply was not worth it. My stack was already healthy, and my chances of taking a top-three finish, while improved by a win on this hand, would not have improved enough to force a shove.

There were other factors that made folding even more clear. My under-the-gun opponent's small stack and strong open from early position made it impossible for me to profitably call the reraise, as I would very often face an all-in bet. Also, the button's stack made this very tough to play post-flop, as I was out of position. Lastly, the button was new to the table, which meant I had no reads on his style or aggressiveness.

These are obviously only some of the determining factors when deciding to call or fold. Yet, this is the general theme in how tournament decisions are made, in conjunction with pot odds, player images, and stack sizes. If nothing else, use this principle to help guide each play that you make.

wow, thanks for the insight. makes sense
G

Putting logic behind coin flip decisions. I love it! Thanks for the good post.

Nice insight, but this is good for tournament play. When it comes to cash games, I would say that positive EV always rules, unless however you consider the fact that If you loose, you will put yourself on tilt and it's better not to go down that road since there are some good fish in the waters that day that you could be eating off instead.
L

Further more, coin flips are not always easy to recognize. I mean you can guess the dude has a low pair vs your AK, but he could also have an AQ or AA or KK, situations in which your either a big favorite, or a hugeee underdog. So depending on your read on the guy, ur decision might be very different.
Share:
Facebook Twitter Reddit Link