Both the WSOP 2020 Online series and the WPT World Online Championships have come to a close and, by all measures, both festivals made the best of a bad situation and were successful in their own rights. The question now is, which of these inaugural events performed the best, and which offered players the most value overall?

CardsChat looked behind the field sizes and prize pools to determine which site won in this unique online heads-up battle.

The WSOP and WPT World Online Championships have paid out more than $240 million in combined prize money over the past two months. (Image: WPT/WSOP)

Stoyan Madanzhiev is the 2020 WSOP Online Main Event champion and $3,904,686 richer after beating 5,802 players. That victory is his biggest win to date. More important to the WSOP, however, is that the online main event generated the biggest single tournament prize in online poker history.

Looking at the chart below, the WSOP’s inaugural online bracelet series outperformed the WPT’s World Online Championships, generating more seven-figure prize pools and larger player pools. But overall, they were more evenly matched than some might have expected. 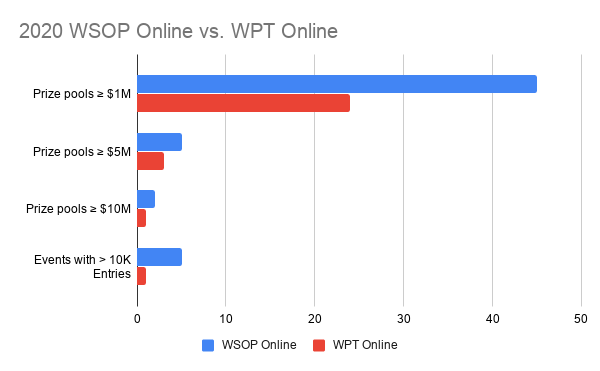 The WPT World Online Championships may be slightly behind the WSOP overall. However, in relative terms, the numbers are fairly even.

The World Online Championships is a smaller festival than the WSOP Online series.

In conjunction with Partypoker, the WPT created 12 championship events at three buy-ins levels (Micro, Mini, Main) to appeal to a wide variety of players with varying bankrolls.

In contrast, the WSOP Online series consisted of 85 bracelet events split over two different sites — WSOP.com for US players in Nevada and New Jersey, and GGPoker for international players. The first 31 events of the WSOP Online bracelet series ran in the US before the remainder of the tournaments played out on GGPoker.


When you equate for the size difference, the WPT World Online Championships has been just as popular, if not more so, than its counterpart. A closer look at two different mid-stakes 8-max events show a larger prize pool for the WPT, but the two field sizes show comparable interest.


In Pot-Limit Omaha, the most revealing stat can be found in the respective guarantees or, in the case of the WSOP, the lack thereof. The WPT based its series on big-money guarantees while, in general, the WSOP relied on the allure of winning a bracelet.

The success of the WPT’s $3,200 PLO event almost cancelled out the overlay from the low-stakes version. However, when taken in isolation, the $320 PLO event could be seen as a failure because it missed its guarantee.

Statistics show the tournament was far from a failure as it attracted a similar level of interest to the WSOP’s small-stakes PLO offering. In reality, it was an over-estimation by the WPT and Partypoker.

This doesn’t mean guarantees are a mistake. When used in the right context, they can generate more interest than anticipated.

This data suggests that using guarantees sparingly is more effective. When every MTT has one, it becomes par for the course. No single tournament stands out from any other.

The data suggests that the WSOP’s strategy of striking a balance between guarantees and no guarantees helped its main event.

It’s impossible to say that one series has been better than another based on statistics. Aside from differences in entry fees, formats, and running times, the WSOP tapped into GGPoker’s Asian player pool, which Partypoker was unable to access after leaving several Asian markets in August 2019.

The WSOP may have edged out its rival in some areas, but the WPT performed better in others.

While both festivals had their respective hits and misses, their overall performance leads us to think we will continue to see new variations on these types of events in the future.