Winning Poker Strategy: The Semi-Demi-Bluff Puts Another Arrow in Your Quiver

I want to explain an act of deception with which you might not be familiar, but that may help your game. Before I do, let’s quickly review two actions that you almost surely know: the bluff and the semi-bluff. 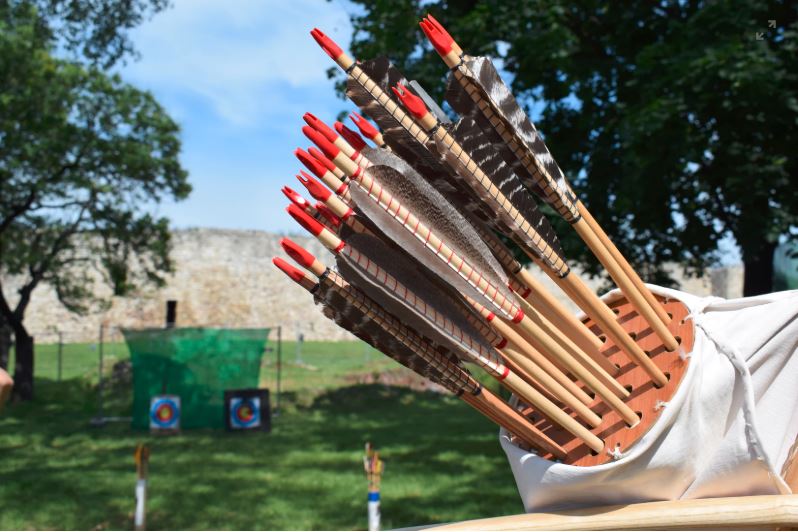 Adding a new weapon to your arsenal can help take your bluffing game up to the next level. (Image: Outdoor Spike)

A bluff, as even non-poker players know, is a bet or a raise designed to make your hand appear stronger than it really is, with the intention of getting your opponent or opponents to fold.  Betting a board that hits a third suited card on the river, even though you don’t have the flush, is an example of a bluff. You’re representing that you hit the flush, though you did not, in the hope that your opponent will fold a hand that is stronger than yours, awarding you the pot for your deceptive efforts.

A semi-bluff is a variation on that theme.

Bluffing with a Backup Plan

Most of us have learned that while we may want to bluff to deceive our opponents, it helps to have another way to win if our bluff doesn’t succeed. We know that it may make sense to save our bluff attempts for those occasions when our hand, if it is called, still has a chance of improvement on the next card or cards. That’s known as a semi-bluff.

Here’s an example of that.

Holding A♥ 4♥, we might re-raise an opponent’s bet on a flop of K♥ 9♥ 3♣. We would reason that we’d have two ways to win in this situation. First, our raise might convince our opponent that we have a stronger hand, and he might fold. But even if he calls our raise on the flop, we might improve on the turn or river by making a flush or a pair of Aces to win at showdown. It’s a bluff with a back-up plan.

Here’s one more weapon – something that you’ve probably not considered. I call it a semi-demi-bluff. It’s a semi-bluff that may also be a value bet.

Think of it this way. Sometimes, making a bluff is a losing play. Your opponent just won’t fold often enough to justify the expense of your bet or raise. Even if you add in the chance that your hand will improve on the next card or cards, your bet still has negative value as a semi-bluff. But sometimes, when you also add in the chance that you might actually have the better hand at showdown without improvement, that bet or raise makes sense.

Let’s look at a specific example of a semi-demi-bluff.

You’re playing $1/2 No-Limit Hold’em. Your aggressive opponent in middle position raised pre-flop to $10. Action folded to you on the button where you have 9♥ 9♠. You call, as do the two blinds, making the preflop pot $40.

The flop comes T♠ 8♠ 7♣. The blinds check and the preflop raiser bets again — $25 this time. With your 9♥ 9♠, you have an open-ended straight draw and a back-door flush draw. You call and the blinds fold, leaving $90 in the pot.

The pot odds of slightly less than 3:1 aren’t offering you the right price for roughly 4:1 drawing odds.

What about making a semi-bluff raise? Your maximum raise, and the only one you can really consider, would be a shove of $150 total – making it $100 more for him to call. You estimate the raise will be successful roughly 30% of the time.

Add in your semi-bluff chances of improving on the river and then winning with best hand, and your results look something like the following:

In this situation, even when adding together the chances of improvement and the fold equity, you still have a losing proposition.

But what if your hand has a third way to win through showdown value? Even if you raise with your 9♥ 9♠ and are called, you might win by having the best hand, even if you don’t improve on the river.

Unlike a semi-bluff with just a drawing hand like A9 or AK, your 9♥ 9♠ might be the better hand. Imagine your aggressive and loose opponent was pushing an AK, AQ, AJ, or even an unlikely A7 or 66. He might call your $100 raise with those hands – figuring (wrongly) that he’s pot committed and might outdraw you.

The additional showdown value of your hand might make your raise on the turn make sense, even if a semi-bluff with no showdown value would be a losing play.

I made up a name to describe this added wrinkle to the semi-bluff. I call it a semi-demi-bluff – a semi-bluff that may also be a value bet. But you can call it whatever you want. It’s just another weapon in your arsenal.

factoring in showdown wins in a semi-bluff situation is not something I was thinking of directly but will now be more concise in my thinking in these spots.