Poker Strategy for the Rest of Us: Recognizing Squeeze Opportunities

When a loose-aggressive player opens from late position, we assume Mr. LAG could be playing a wide range of hands.

We also assume a similarly wide range for Mr. Caller, typical for most low-stakes players. In fact, thinking he might have position over Mr. LAG, he might have widened his normal calling range. 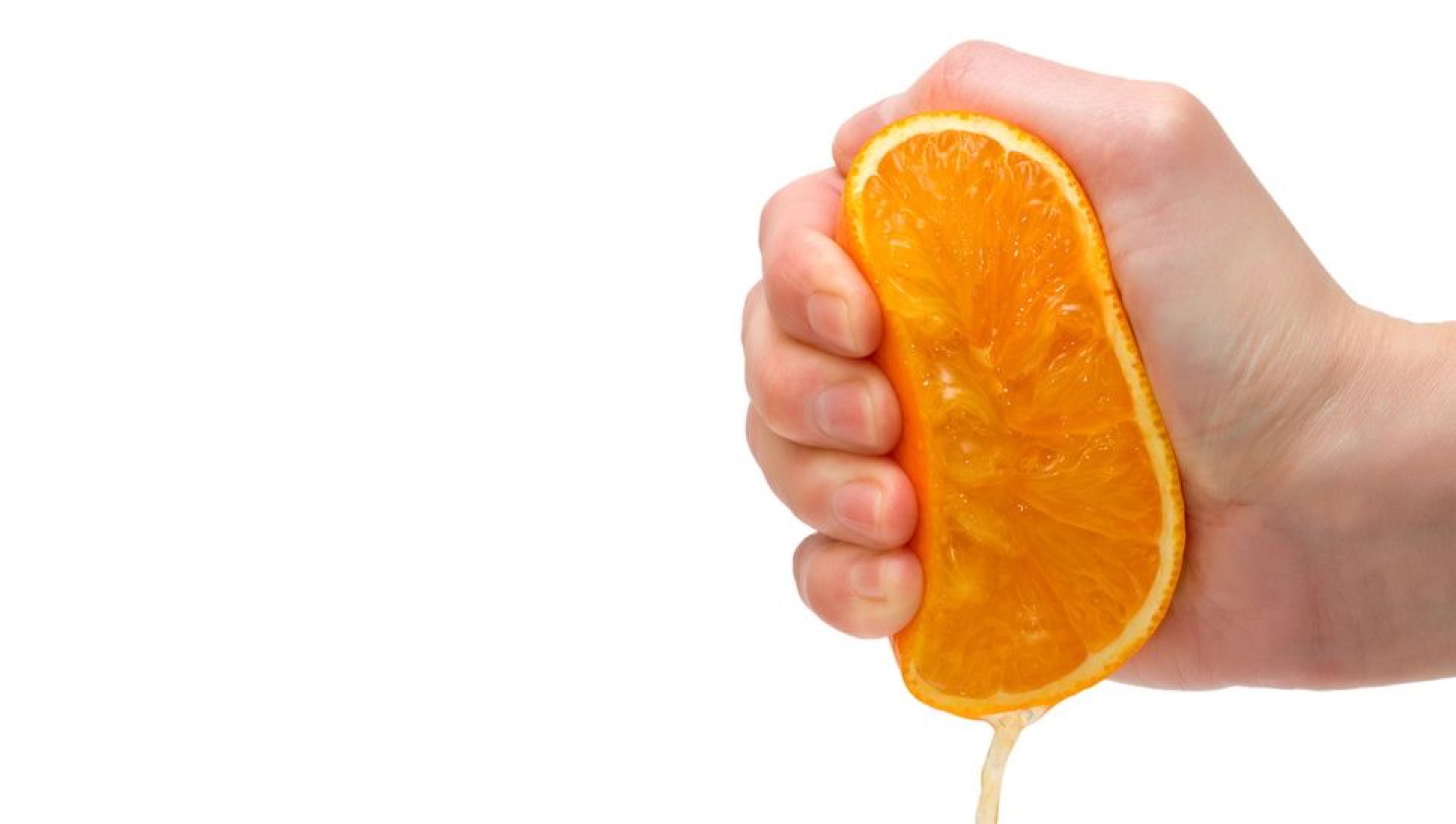 Sometimes three-betting with any two cards can be quite profitable — if there’s enough juice. (Image: Byrslf.co)

“Cards are war, in disguise of sport.”

Mr. Caller’s range is also capped, so it is likely devoid of its strongest hands such as KK+ and possibly QQ and AK. Generally, Mr. Caller has a lot of marginal combos in his range.

Our three-bet squeeze has a good chance to fold out both players. Mr. LAG has an abundance of relatively weak combos and has to worry about Mr. Caller behind him, so he is being squeezed between our three-bet and Mr. Caller’s potential four-bet. Additionally, Mr. Caller has many combos he won’t be comfortable playing out of position against a three-bet.

Both villains are usually first-level thinkers (what do I have); they raise and call modest bets based mostly on their own cards; if they like it, they play it. But a three-bet often forces them into second-level thinking (what does he have). Now they worry about how well their combo will stack up to our re-raise. They are no longer as happy with their original decisions.

Mr. LAG opens from the hijack position and is called by the cutoff. We are on the button with a classic squeeze opportunity.

The PokerTracker definition of a squeeze opportunity is an open followed by a call, which then creates fertile three-betting soil. This doesn’t consider the strength of our cards or the playing style of our opponents. It’s a situational play rather than one based solely on our cards. We could also three-bet here with pocket aces, which would look like a squeeze to our opponents and would become part of our official squeeze stat. But we would actually be raising for value, so an opponent who squeezes at a low rate is likely only squeezing for value.

Don’t confuse this squeezing scenario with other situations that are not for squeezing. A limp followed by a raise is not a squeeze opportunity. Nor is an open followed by two callers.

Online squeezing tendencies are quite different than those found in Vegas $1/$2 games. Figure 1 shows that online players raise and three-bet much more often, but cold-call much less often. (CCPF is the relevant stat for squeezing since the caller has not yet voluntarily put any money in the pot.)

Notice that the average button player three-bets at a very low rate, both live and online. This suggests that nearly all squeezing is done for value rather than as a situational play.

Figure 2 depicts the profitability of online squeezing. Squeezing at a 3% rate leads to a button profit of about 23 BBs per 100 button hands. But increasing our squeezing rate slightly to 3.5% improves our profit by a whopping 7 BB/100! This curve terminates at 3.5% because hardly any online players squeeze at a higher rate. But the upward trend suggests there is even more profit to be made by squeezing more often. 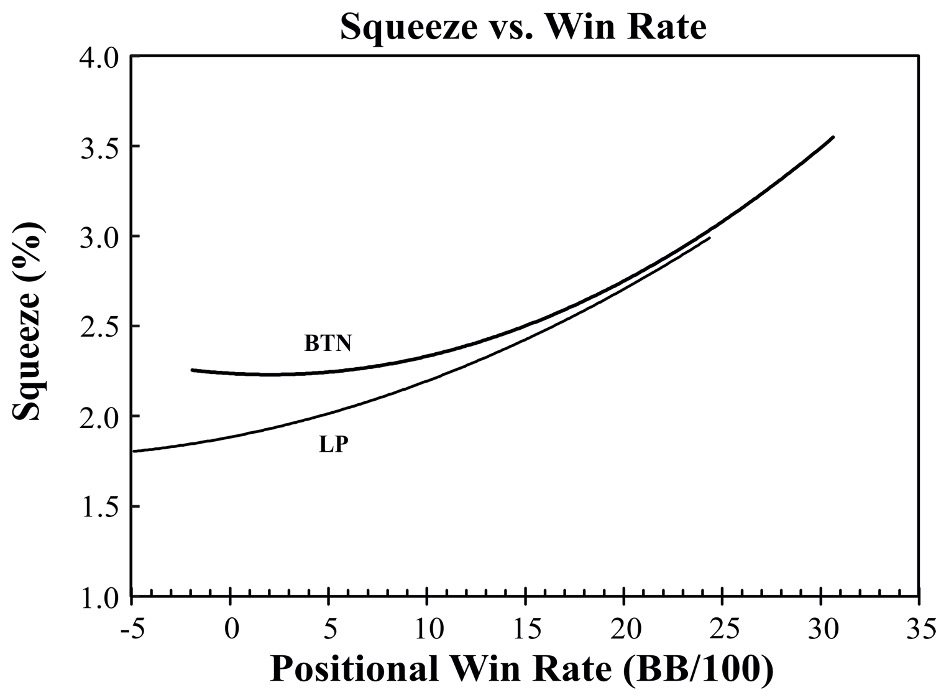 Suppose we squeeze for value with [JJ+, AK] = [3.0%]. It stands to reason that we also could squeeze with additional combos in the right situations. So our optimal squeeze rate should be much higher than 3.0%, perhaps even higher than 4.0%. This will depend on our reading skills and postflop playing skills.

Three-betting is very rare in Vegas $1/$2 games, occurring less than 1% of the time. So it follows that Vegas donkeys rarely squeeze, and their three-bets are nearly always for value. Consequently, if you find yourself being squeezed in Vegas, you should nearly always think horses (he has a big hand) rather than zebras (he may be stealing).

Vegas raises are called so often that players become passive. This timidity tends to shrink their three-betting comfort zone, but we shouldn’t follow their example. Yes, Vegas donkeys do call raises too often. But three-bet calls are still relatively rare: less than 15% on average. When we are on the button or in the blinds, our three-bet squeeze is likely to fold out the players behind us and we need only worry about the opener and caller.

My previous discussion suggests we should be squeezing at least 4% of the time. Of course, some of these will be squeezes for value. Certainly, we should squeeze with [JJ+], which is a 1.8% range. I believe that squeezing with AK would also be for value, which is an additional 1.2% range. That’s a 3.0% squeezing range that is entirely for value against most Vegas villains. (Maybe not rocks.)

So when should we squeeze as a steal? This often depends more on our situation than our cards. Superior postflop position is important because it enhances our ability to win unimproved. And villain reads are important since we need to have lots of fold equity. So a squeeze-steal attempt is a judgment call; sometimes we can squeeze with any two cards.

If a rock opens, his range is likely to be so tight that we can’t squeeze him off his hand very effectively. Likewise, if a maniac opens and experience tells us he doesn’t like to fold, we should only squeeze him for value. Pay attention.

Notice what your opponents have done in other situations. This is one reason I prefer games with regulars; I often have a good understanding of my opponents’ ranges.

Suppose a LAG in MP3 opens to $8 and is called by the passive hijack. We are on the button with 7 7. This is a situation in which few Vegas Donkeys would three-bet; they would mostly fold or call for set value. But if we squeeze to about $30, each villain is likely to fold his more marginal holdings.

Our Equity When Called Helps Tremendously

The above analysis shows that our $24 three-bet has zero-EV if both players fold 57% of the time and if we never win when called. But we must also consider the amount of equity we’ll have when we are called.

If we squeeze with our pocket sevens, we will flop a set or better 12% of the time. Assuming a single caller, a $5 rake, and winning a checked down hand after we flop our set, our squeeze EV improves to +$3.14. As a result, our both-fold break-even point drops from 57% to 48%.

One final factor to consider is the value of superior position. If we squeeze from the button, we’ll always have a superior postflop position. This positional equity allows us to win additional pots when we don’t improve. Of course, this depends greatly on our postflop skill, which is one reason the pros like to squeeze.

Squeezing is war, in disguise of value betting.

Our first thought when we have a squeeze opportunity in the cutoff, button or blinds should be: “Is this a good squeezing opportunity?” If it is, squeeze hard when we prefer folds. Squeeze softer when we have a value hand. Squeezing is so rare (even from us) that our opponents will rarely realize the significance of our changing bet size.