There’s a siren’s call in poker. It’s the sweet and sultry voice that beckons “I have to call.” It pierces through the haze and fog of difficult decisions and causes you to steer into danger, even when your judgment dictates a more prudent course. Its seductive sound tempts even the most thoughtful and skilled players, frequently leading to the destruction of their carefully built stacks, and to their doom. 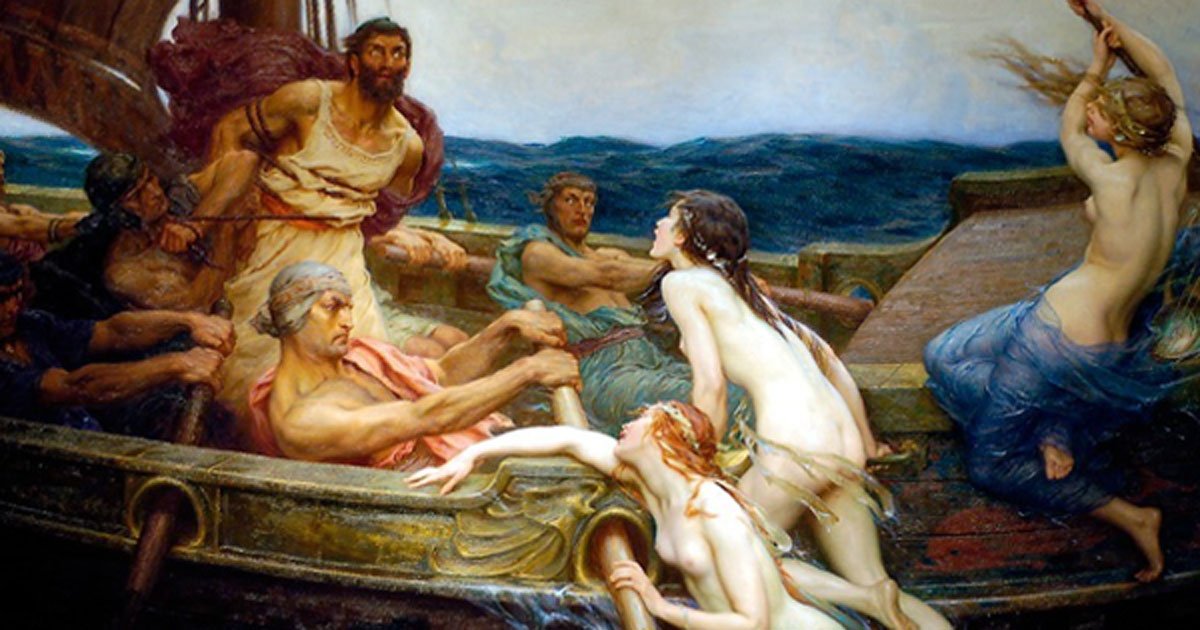 In Greek mythology, the Sirens lured sailors to their doom. In poker, they can lead unwary players to go bust. (Image: Ancient Origins)

It’s funny, in a way, even as it’s pathetic. Many solid players who work for hours making good decisions, being selective, thoughtful, and careful in their play, blow it all because they can’t fold and “have to call.”

Here are six of the most common situations when such a phrase is likely to seduce you. By recognizing them, you will be better able to avoid them.

1. You think someone is bluffing

This is perhaps the most common reason why people mistakenly call, even when their better judgment screams for a fold. They just don’t want to be bluffed out of a pot. But if you’re a good player, you will be bluffed. This is especially true in no-limit and pot-limit games when the size of the bet is often a large percentage of the pot.

If you’re going to be a winning player, you must restrain your impulse to always keep your opponents honest, especially when the objective evidence tells you that your opponent probably has the strong hand he’s representing.

If your opponent is at least a relatively rational player, if the story he’s telling with his bet makes sense, and if your better judgment concludes that you are probably beat, you don’t have to call. Save your money.

2. You finally have a good hand

It’s been an hour, maybe longer, since you’ve seen anything resembling a decent hand. And now, you have a marginal hand. It’s not trash, like all the other hands you’ve had lately; it’s just outside your playing range for your position.

An opponent makes a raise in early position. You know you shouldn’t call, and you wouldn’t under normal circumstances, but it’s been so damn long. You can’t fold forever. You tell yourself that you’ll never get action when you have a good hand if you just keep folding. So, you have to call, right?

Nope. You don’t have to call. You can wait until you have a legitimate hand or you can raise with one of your bluffing hands. If you think your observant opponents now consider you a rock, you can go for a walk for a while and let a break from the action erase your tight image from their short-term memories. But you surely don’t have to call just because you’ve been card dead for a long while.

3. You have to protect your blind

You’ve posted the big blind and everyone folded until the cutoff, who raises. The button and small blind both fold. You don’t have much of anything, but you can’t just let him run over you and steal your blind, can you?

Actually, yes, you can do exactly that. Your blind is tiny compared to the money you may well lose by chucking your solid play to protect it. This isn’t the final stages of a tournament or a situation when the blinds are increasing to force action. This is a low-stakes, no-limit game where the blinds are tiny. Respect the raise, even if it’s in late position and you’re the large blind. You don’t have to call.

It’s heads up. You’re both very deep. You have A♥ K♠, raised preflop, and you then bet the flop of K♦ T♠ 4♥. Your opponent called, and called again on the turn when the 4♣ hit and you bet again. On the river, the board reads K♦ T♠ 4♥ 4c 8♠. Your opponent checked and you figure he missed his draw. You slide out a value bet and your opponent triples it with a check-raise.

You know that check-raise means you’re beat, but that siren’s voice tells you that since you have a decent hand with your top pair, top kicker, you have to call. Don’t do it.

Indeed, you realize that it was probably a bad idea to bet the river in the first place, but it’s too late for that now. Don’t waste your money on a call that is almost surely a loser. Fold.

5. You’ve already called and are raised

A solid early position player raised the $2 big blind to $10. A few players folded, and you called with your 6♦ 6♠, figuring that since you and the raiser each have about $200, you’re getting great implied odds. It folds around to the button, who shoves for his last $50. Everyone folds to the initial raiser, who calls.

You’re thinking you’re already in for $10 so you might as well call and see what the flop brings.

That’s a mistake. You don’t have to call.

The formula that gave you a good reason to call in the first place has changed. The additional $40 is too big a price to pay for the possible reward. Recognize that, sometimes, it makes sense to get off the horse mid-stream. This is one of those times. You don’t have to call. Fold.

6. You’ve already lost a lot of money in the session

You started out with great expectations, but now you’re down about $800 in this $2/5 game. You’ve got another $300 on the table when this hand begins, and you’ve decided that you’re not buying in again, no matter what.

It’s the turn. You have $100 invested in the hand already. You’re on a flush draw. $300 in the pot. Three players. Your opponent bets the pot. The one other opponent folds. You’re almost certain that your opponent has two pair or a set. You can’t win without hitting your flush.

No, you don’t. The simple math dictates that you need to fold. You’re getting 5 to 2 pot odds for a draw that is worse than 4 to 1 against you. The fact that you’re down for the night and feeling desperate and fatalistic is irrelevant. Fold to the bet, then pick up your remaining chips, cash out, and go home with your $200.

The sirens were mythical figures who seduced mariners with a song so beautiful and seductive that none could resist its temptation. Those who heard it were lured inescapably to their doom. The only defense was to seal their ears with wax, so the song would not be heard.

In poker, that song’s lyrics are “I have to call.” To avoid danger, recognize the six situations described above when those words are most frequently heard, and learn to turn a deaf ear to them while proceeding with your thoughtful and rational decision-making.