The South Point Casino in Las Vegas hosted an unusually large event on Thursday that left the poker room having to cover a huge overlay. The $2,200 buy-in Benny Binion Shootout attracted just 94 players, 34 entrants shy of reaching the tournament’s guarantee. But, despite the short-term loss, the popular card room just might come out ahead in the long run. 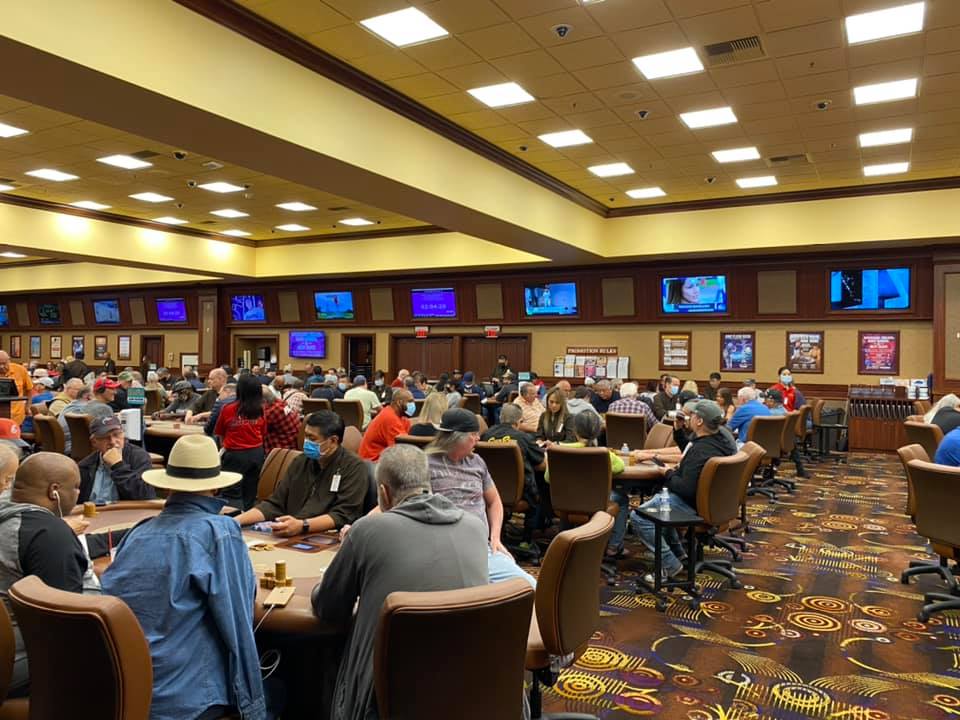 South Point, which is located just south of the Strip, is one of the busiest card rooms in town. The casino spreads mostly low-stakes cash games and inexpensive daily tournaments. Many low-stakes grinders in Las Vegas consider it to be the best place to play due to the juicy games and occasional freerolls.

From June 11-22, South Point is hosting a mini-series, with cheap daily tournaments featuring guarantees ranging from $3,000 to $50,000 ($250 buy-in each day at 6 pm). But on Thursday, the poker room offered a shootout tournament that was well above its regular price points. When the event didn’t go as planned for the card room, both players and staff offered theories on what went wrong.

Ben Abrahams, a local player who considers South Point his favorite room, posits that “there are better value tournaments elsewhere,” including online at WSOP.com, where he spent the evening grinding away in a $500 buy-in event that guaranteed a $75,000 prize pool.

Abrahams said he played in a cash game at South Point earlier in the day, but didn’t compete in the $2,200 shootout event, partly because he wasn’t thrilled with the tournament’s format. He wasn’t the only South Point player who said as much.

“I can’t speak too much about the structure since I played so little of it, but I did like the idea of eliminating half the field each time,” Christian Santos, a local who played in the shootout and busted in Round 1, told CardsChat News. “Structure is obviously pretty fast for a $2,200 tournament.”

The unique event, which guaranteed a $256,000 prize pool, featured a different structure from a normal No-Limit Hold’em tournament. The first round of play started at noon on Thursday and, once 50% of the players at each table were eliminated, play concluded for the afternoon. The remaining players then came back to the card room at 6 pm for the second round. Once again, play was halted after half the field at each table busted. Those who advanced will return Friday and play down to the final table of eight, which will take place on Saturday.

Although the event is intriguing and a change of pace from standard poker tournaments, South Point was unable to even come close to reaching the 128 players needed to match its $256,000 guarantee. On Wednesday, one day before the tournament kicked off, only 20 players had registered. A few minutes before “shuffle up and deal” was announced, just 80 players had bought in.

While the tournament’s unique format may have kept some players away from the table, a number of other non-participants took issue with the event’s structure. Players began with 25,000 chips and the blinds increased every 30 minutes in levels 1 and 2, every 45 minutes in levels 3 and 4, and at 60 minutes at the final table.

“I feel like the structure is supposed to be fast to get to that elimination point,” Santos argued.

A top-heavy payout structure is another factor that wasn’t appealing to some players. First place will receive $100,000, which is 39% of the entire prize pool, quite a bit higher than a standard tournament. Players who min-cash by finishing between ninth and 16th place were originally scheduled to receive just $3,000, only $800 above the buy-in.

Those factors along with competing events at Venetian, Wynn, and online may have also contributed to the lack of interest in the event.

South Point scrambled to fill seats on Wednesday and awarded entries into the tournament to players who ran deep in their daily tournaments. Still, only 94 players ended up competing, leaving the casino more than $50,000 short of the guarantee. Poker room manager Jason Sanborn wasn’t bothered by the overlay and he doesn’t consider the tournament a failure. He even found a positive in the unfortunate situation.

“Players are talking about the room and that is always great,” Sanborn told CardsChat News. “We honored the guarantee and started the tournament without delay. If we advertise something, we follow through regardless of the cost. Hopefully, players will recognize that, and the support will be there for future events.”

When a special poker event fails to reach its guarantee, some may wonder if the card room did a poor job marketing the tournament. But Sanborn doesn’t see it that way.

“People always talk about more advertising, but there are very few ways to reach the ‘right’ people effectively,” Sanborn said. “Some of the players that registered last minute said they only found out about it a few days ago. We will definitely look at other ways to advertise going forward, but with a capped field of 128, the risk is always having way too many people which is almost as bad as having too few.”

Although the poker room must cover a large chunk of the guaranteed prize pool, Sanborn believes the event could serve as a valuable marketing tool, which just might attract new poker players to South Point in the future.