Despite the World Series of Poker moving to the fall in 2021, the poker scene in Las Vegas will still be booming this coming summer. Wynn Resorts just might make some forget all about the WSOP when it hosts a $10 million guaranteed high-stakes tournament from June 25 to July 2 as part of its $16 million guaranteed summer series. 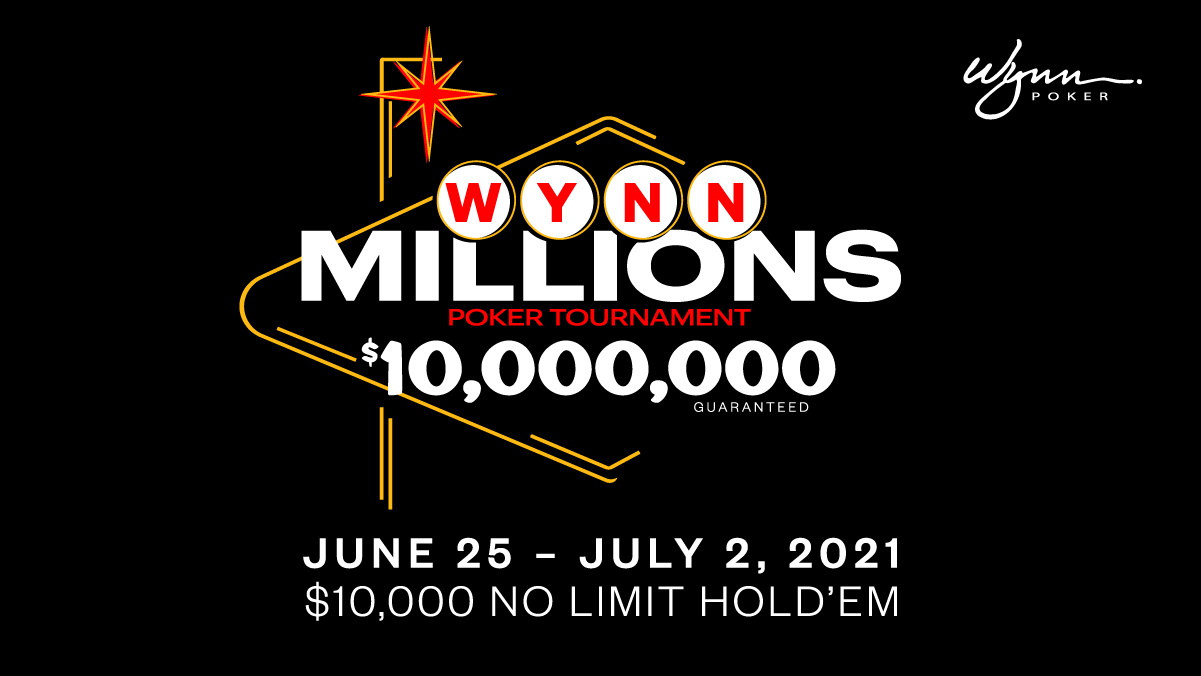 The Wynn Millions will be one of the biggest non-WSOP events in Las Vegas history. (Image: Twitter/@WynnPoker)

Wynn Millions, a fitting name for the $10,000 buy-in event, will give poker players a shot to win… well, millions. The event is sure to be the talk of poker this summer, especially with the WSOP on the shelf until October.

Wynn isn’t the only casino hosting major events over the warmest months of the year. Venetian is bringing back its popular DeepStack Championship Series, which begins in May and runs until the beginning of August. The series includes three tournaments that promise at least $2 million in the pot, highlighted by the $5,000 buy-in WPT Venetian, a $3 million guaranteed tournament beginning July 2.

That event will certainly draw some attention and a huge crowd, but likely won’t compare to the Wynn Millions, which offers more than triple the prize pool for double the cost.

Few events in Las Vegas history have come close to matching the planned summer event in terms of buy-in and guarantee. World Series of Poker $10,000 buy-in events, outside of the Main Event, never come close to generating a $10 million prize pool. For the Wynn to hit the guarantee, at least 1,000 players must enter, and that’s before factoring in rake. So, we’re talking about a truly unique and historic event in Las Vegas.

Millions more up for grabs

While the $10 million tournament is sure to be the highlight of poker in Las Vegas this summer, it’s not the only big tournament at the Wynn during that time. The Wynn Signature Series, which runs from May 27 to July 12, includes more than 30 poker tournaments and more than $16 million up for grabs.

The series kicks off with a $400 buy-in, $40,000 Survivor event and concludes with a $500 buy-in, $500,000 guaranteed No-Limit Hold’em finale. In between, the Wynn Signature Series features five events with at least $1 million up for grabs, including the Wynn Millions.

Wynn is a surprising destination for such a major event. That’s not to say the casino isn’t a popular place for poker, including high-stakes games. Wynn (technically, Encore) boasts one of the top poker rooms in the world, not just in Las Vegas. And the mega-resort regularly hosts some juicy mid-stakes events.

But outside of the $300,000 buy-in Super High Roller Bowl at Aria, Venetian’s annual DeepStack Championship, the $10,000 buy-in WPT Five Diamond Poker Classic at Bellagio, and the World Series of Poker, events of this magnitude are unheard of in Las Vegas. Even the regular $25,000 and $50,000 buy-in high rollers at Aria don’t come close to reaching a $10 million prize pool. As Gus Hansen famously uttered prior to the 2018 WSOP, “it’s going to be a great summer.”