Daniel Negreanu nearly took two bad beats in one hand with pocket aces in the final event of the inaugural PokerGO Cup on Wednesday. But Sam Soverel’s late collapse bailed him out, allowing Negreanu to take home the namesake trophy going to the overall series winner. 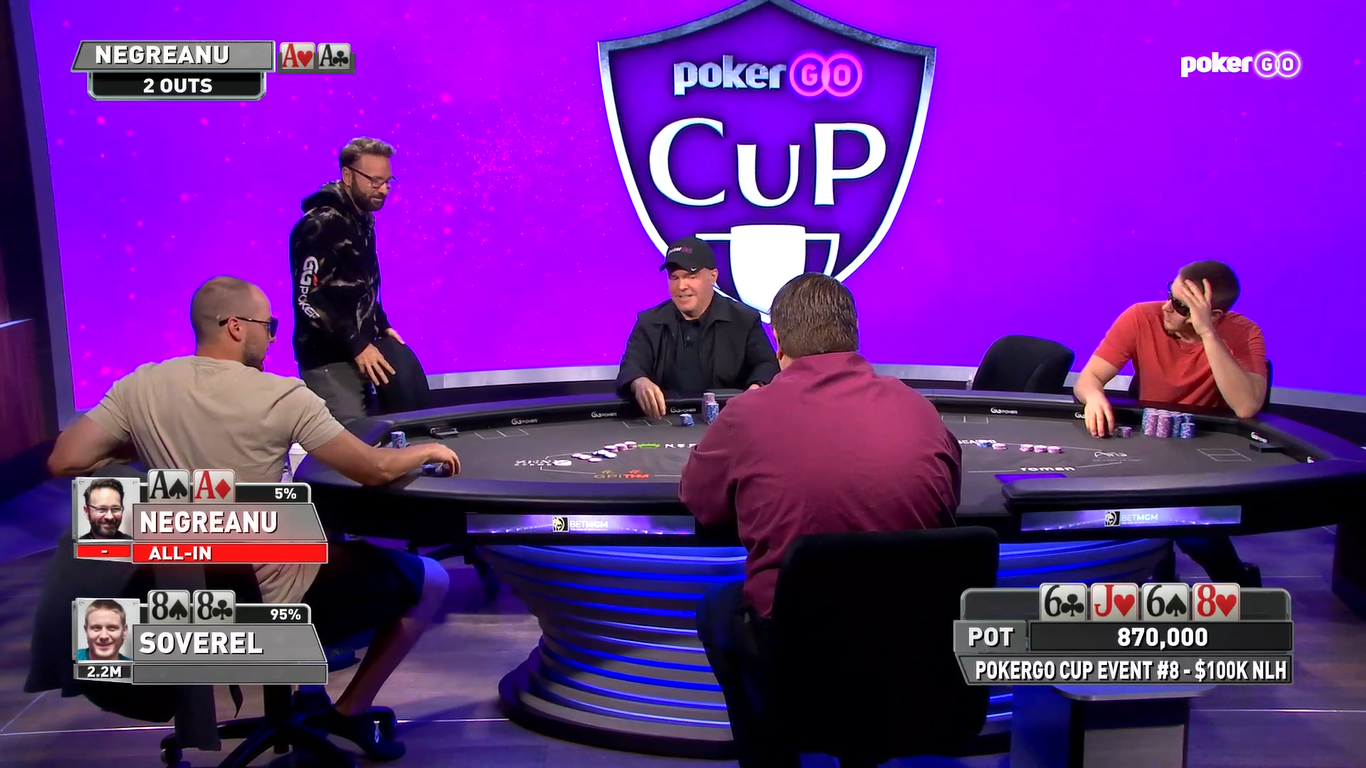 Sam Soverel laid a brutal bad beat on Daniel Negreanu, cracking aces when he hit is two-outer on the turn. (Image: PokerGO)

Entering the session, more was at stake for Negreanu than just the potential $1,058,000 first-place payout. With a third-place finish or better, he would wrap up the PokerGO Cup series title and a $50,000 bonus. In addition, he was attempting to win tournaments back-to-back after going 2,821 days without a single win.

Only four places in the 23-player high roller were to be paid. Dan Smith, the small stack early on, picked up pocket 10s, but ran into Soverel’s pocket jacks. The board ran out 5-K-A-8-7, sending Smith home on the bubble. That officially ended the PokerGO Cup title run for Ali Imsirovic, who won two events during the series, as he could no longer beat Negreanu.

Only Negreanu and Soverel, two of the four remaining players in the finale along with Sean Winter and Cary Katz, could still win the PokerGO Cup. Soverel could only win if he were to ship the final event and Negreanu busted in fourth place.

Hand of the series?

Despite having the second-smallest stack, Negreanu was in a strong position. Winter had just five big blinds left and had been hanging on by a thread when Smith busted. If Negreanu could simply outlast Winter, he would wrap up the PokerGO Cup crown. And then it all fell apart.

Soverel opened to 80,000 with pocket 8’s — twice the big blind. Negreanu, on the button, looked down at pocket aces and shoved his final 395,000 in the pot. The original raiser, with 2.6 million chips when the hand began, couldn’t fold given that if he were to bust Negreanu, he would be in great position to win the PokerGO Cup series title.

With 870,000 in the pot, the flop came out 6-J-6, nice and clean for the six-time WSOP bracelet winner. But the 8 on the turn gave Soverel a full house, and the river K didn’t change the outcome.

Negreanu went home in fourth place, earning $230,000, but was in jeopardy of losing the bonus $50,000 payout for winning the overall PokerGO Cup standings.

Despite the bad beat, Negreanu still had a shot to win the series crown. He needed Katz or Winter to bust Soverel, the huge chip leader. Winter, who only had a few big blinds left, would send the remainder of his stack to Soverel. In exchange, he received $368,000 for third place.

Negreanu’s only remaining hope was for Katz, who was in a 2-1 hole when heads-up play began, to win the tournament. The PokerGO founder didn’t go down quietly and pulled off numerous bluffs, including one for his entire stack with king-high that got through (Soverel had a pair of nine’s on a 10-high board).

With the stacks nearly evened up, Katz attempted another bluff with Q-8 on a board of A-K-6-J-8, firing out 675,000 up against Soverel’s K-7. Once again, his bluff got through and he showed it. Negreanu, watching from the rail, celebrated as the player he needed to win regained a 1.5-1 chip advantage.

Soverel, considered by many to be one of the best in the game, certainly didn’t prove that during heads-up play on Wednesday. Katz ran him over repeatedly, winning bluff after bluff, and taking down multiple pots at showdown without a pair because his opponent was unable to pull the trigger on a bet.

Katz would eventually take a 3-1 chip lead, and finished off the lopsided heads-up match with Q-4 all-in preflop. Soverel called off his final few big blinds with 10-9, and then watched the board run out 5-3-4-J-2. Negreanu loudly screamed, “Yes!” after the final card was dealt. Soverel dodged bullets earlier in the day, but couldn’t avoid the impressive, dominant heads-up performance put on by Katz, who won $1,058,000.

Soverel, who held the chip lead from the start of the day until his late collapse, took home $644,000. Negreanu added another $50,000 to the $230,000 he had won earlier in the day and became the first-ever PokerGO Cup champion.

“I’ve never rooted for a billionaire to win money more than I did just now, and I’m going to drink to Cary Katz,” Negreanu said during the post-game interview on PokerGO.

a few months ago the trolls were saying neither Kip Poker nor The Poker Brat , old school pros , would have a chance in the high roller tourneys vs the modern GTO theorists .