The dry spell is finally over for Daniel Negreanu, who won his first poker tournament since 2013 on Tuesday at the PokerGO Cup series. 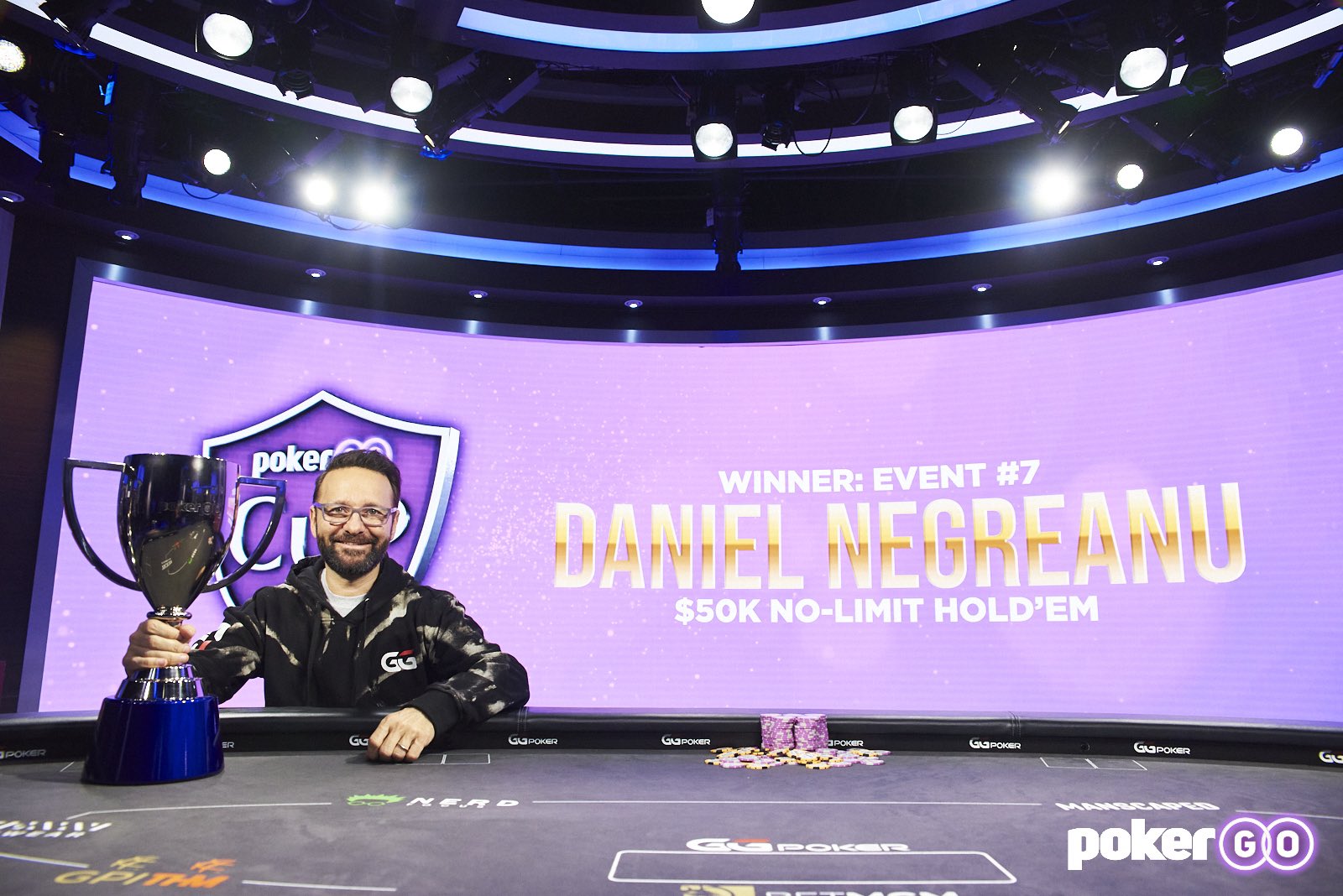 It’s been a minute since Daniel Negreanu last sat in the winner’s circle. (Image: PokerGO)

Negreanu outlasted a tough final table in Event #7 to get the monkey off his back. Winning the $50,000 No-Limit Hold’em tournament scored Negreanu a welcomed $700,000 payday. Ali Imsirovic, who booked two PokerGO Cup wins in the past week, began play on Day 2 with a massive chip lead, but was unable to hold on.

Imsirovic ran into some bad luck early and went from first in chips to first out at the final table. He was eliminated in fifth place, good for $122,500. Had he shipped his third title, he would have likely wrapped up the PokerGO Cup crown. Instead, he has some close competition, including Negreanu, who is just 29 points off the lead with one event remaining ($100,000 No-Limit Hold’em, which began on Tuesday).

Negreanu won the €25,600 buy-in No-Limit Hold’em High Roller at the WSOP Europe series for €725,000 exactly 2,821 days ago. That was the last time he won a poker tournament, until Tuesday afternoon at the PokerGO Studio in Las Vegas.

“It’s hard to put into words, honestly,” Negreanu said of how it feels to finally win a tournament during his post-game interview on PokerGO.

Negreanu then praised his heads-up opponent, David Coleman. “I just met him this week, and it’s been a pleasure playing with him,” Negreanu said. “He’s young, but he’s a class act, and I knew right away he’s gonna be a superstar.”

Negreanu’s struggles in recent years, especially in heads-up play, haven’t been much of a secret to the poker community. Doug Polk, who beat Negreanu for $1.2 million earlier this year in a heads-up battle, even discussed the losing streak in a YouTube video just two days ago. To Polk’s credit, he called his shot and claimed that Negreanu would likely win one soon.

The $50K event only had 35 players, so Negreanu didn’t beat some massive field. And the PokerGO Cup, in just its first year of existence, isn’t exactly the most prestigious poker tournament in the world. But after eight years of near misses (10 runner-up finishes since the 2013 WSOPE — 14 if you count his heads-up losses to Polk and Phil Hellmuth), he’ll take it.

“This is the crazy thing about poker,” Negreanu told Jeff Platt about his inability to capture poker tournaments in recent years. “It’s not as simple as if you play the best, you win. I feel like I’m playing the best poker of my life and I have been for six months to a year, and the results have just not been there to back it up. So, then you ask yourself, ‘am I really playing well?’ And I believe I am.”

Tuesday’s performance marks Negreanu’s 43rd live poker tournament victory — and his first since 2013 — in events recorded by the Hendon Mob database. His first win came in August 1997 in a $225 No-Limit Hold’em event for $18,800 at the Heavenly Hold’em series in Los Angeles. That was the start of what became one of the most impressive poker tournament resumes in history.