Oracle Red Bull Racing wrapped up another successful Formula 1 season last week with a unique charity event hosted by PokerStars. CardsChat’s Daniel Smyth raced down to see what it was all about.

PokerStars marked its first successful season alongside Red Bull Racing with a magical charity event in aid of Wings for Life. (Image: PokerStars)

The wrap party brought stars from racing, poker, and social media together for an evening of reflection, entertainment and, of course, betting. With PokerStars and Red Bull Racing striking up a partnership in January, a charity poker tournament was a fitting way to end the year.

CardsChat was invited to ante up on December 2 and find out more about the partnership. Also in attendance was a team of representatives from the spinal cord charity, Wings for Life.

The evening got off to a magical start, quite literally. Award-winning magician Fergus Flanagan was on hand to greet attendees as they arrived at Red Bull Racing HQ.

Flanagan’s skill with a deck of cards was better than mine. However, when it came to making chips disappear, I certainly had the edge that night (more on my bad beat story later). 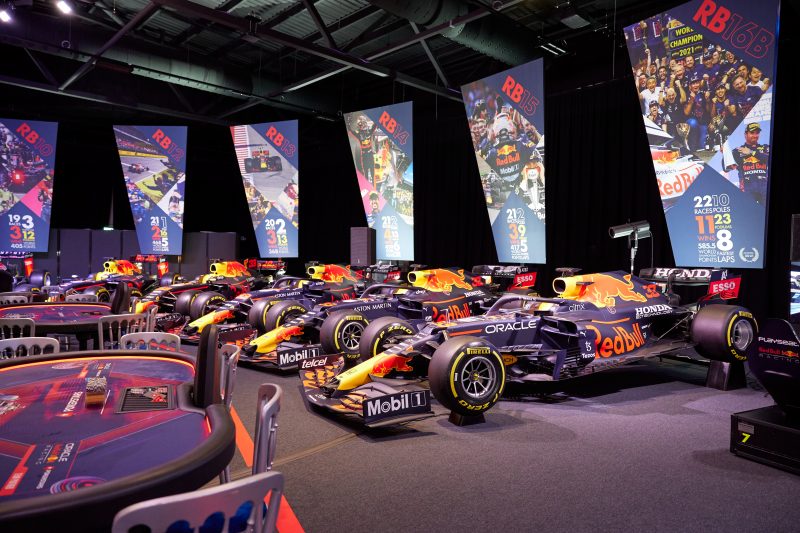 Once inside the venue, we had the opportunity to get up close and personal with Red Bull Racing’s fleet of cars. Few people ever get within touching distance of a Formula 1 car that costs over $100 million to make, so to see 16 on display was truly impressive.

It’s this sort of access that’s become par for the course thanks to PokerStars. Its first year alongside Red Bull Racing has given F1 fans access to unique experiences that only millionaire money can buy.

Topping the list of crossover promotions is the Red Spade Pass. Anyone who won a Red Spade Pass tournament or promotion got to enjoy the ultimate F1 experience, which included race tickets, trackside access, video messages from Red Bull drivers, and more.

“We started the season with a million-dollar rewards drop and that set the tone for what was to come,” said McAdam Willets.

There was certainly a lot more to come. Red Spade Passes gave Formula 1 fanatics exclusive access to races in Monaco, Brazil, and beyond.

“My most memorable moment of the season was when we delivered Red Spade Passes to members of the community and saw their faces. In Brazil, people were coming up to me crying because they were so overwhelmed with the experience,” McAdam Willets continued.

McAdam Willets promised many more experiences like this next year, something Red Bull Racing’s Horner fully supports. As he told us during the presentation, poker and racing share a lot of similarities.

“Poker and racing are both high-risk, high-reward activities,” Horner said. 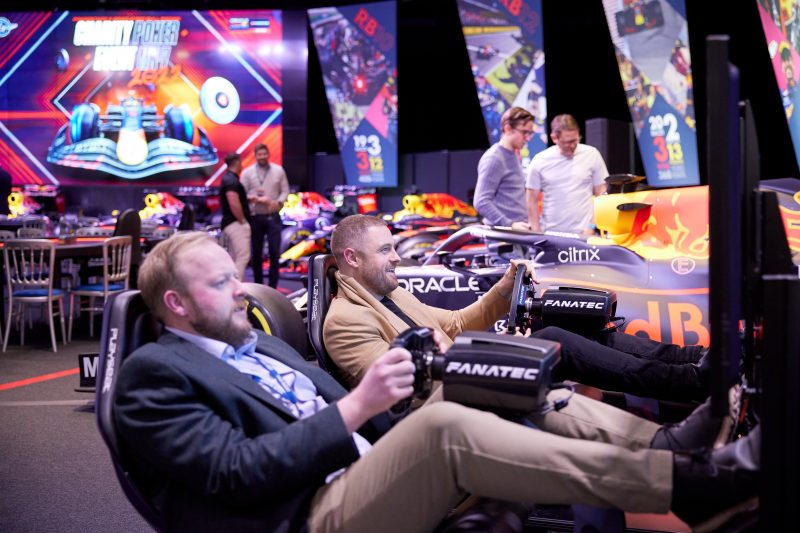 Poker and racing fans came together at Wings for Life event. (Image: PokerStars)

We also know that racing drivers with time and money on their hands enjoy a game or two of poker.

“There are a lot of drivers who play and the game is hugely popular within the industry. The problem these days is that it’s hard to get drivers into their cars because they’re playing poker,” Horner continued.

The burning question MC James Hartigan asked was: who would Horner like to play heads-up from the world of racing? Almost without hesitation, he said the billionaire and former CEO of Formula 1, Bernie Ecclestone.

With the talking done, it was time to play poker. PokerStars ambassadors showed people how to play poker and offered some strategy tips. Naturally, my bravado prevented me from listening in on the lessons, something I quickly regretted.

It took less than five hands for me to lose 95% of my stack. Unsurprisingly, I was out a few hands later. Did I play aggressively with pocket aces and get unlucky? Yes. Did I complain about it? A little bit. Did PokerStars ambassador Nick Walsh tell me I played it perfectly? Yes, he did. 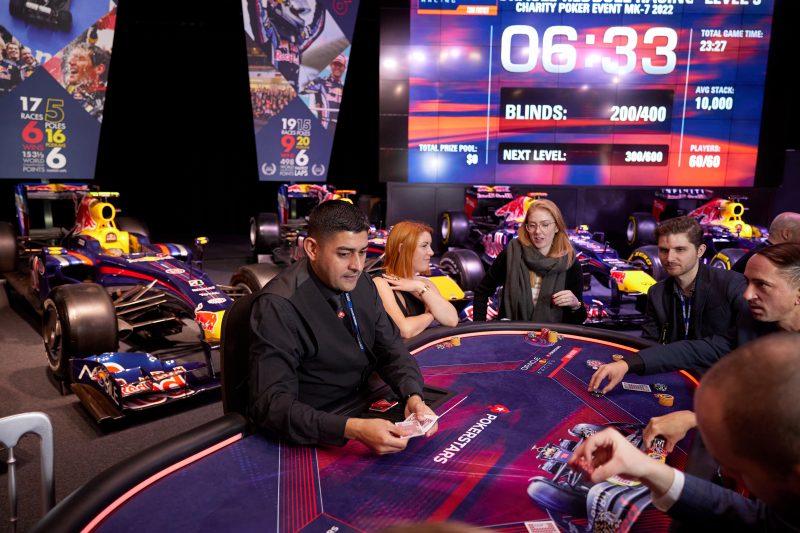 Poker was fun for everyone, except me. (Image: PokerStars)

In reality, the PokerStars Red Bull Racing wrap party wasn’t about my luck in the tournament or the tournament in general. It was a chance to see what the partnership is doing for poker and, importantly, charity.

Wings for Life was set up by Red Bull founder Dietrich Mateschitz and is now the company’s official charity partner. As such, PokerStars has been helping to raise money for the foundation’s work on spinal cord injuries.

What’s next for PokerStars and Red Bull Racing?

As the evening wound down and a saxophonist played along to dance music, discussions turned to the future. With Formula 1 heading to Las Vegas in 2023, the worlds of poker and racing will become even more entwined. That fact isn’t lost on McAdam Willets.

“We’re very excited about Vegas. I want to do things that reach wider and connect with the Red Bull Racing fanbase,” she said.

This desire to reach new demographics strikes at the heart of PokerStars’ partnership with Red Bull Racing, and the charity event was a perfect encapsulation of that.

Not only was I able to rub shoulders with PokerStars ambassadors, such as Lex Veldhuis, Parker Talbot, and Georgina James, but social media influencers and those within the racing industry. 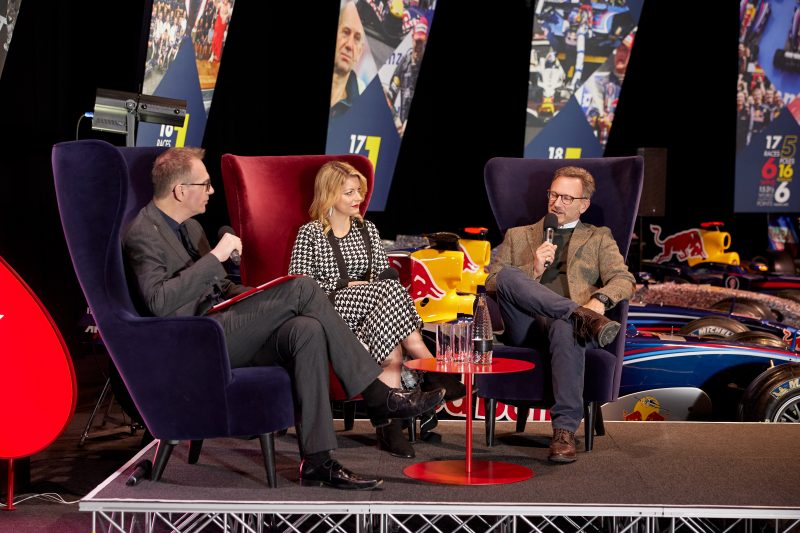 Poker’s future as an industry hinges on new players. I don’t know how many players from the event will play poker again, but I do know everyone enjoyed their time at the felt. If PokerStars’ partnership with Red Bull Racing creates more bridges people can cross, that’s a positive for the industry.

Of course, giving poker players who also happen to be F1 fans access to unique experiences is also important. But, when it comes to driving the industry forward, crossover partnerships take the pole position.