Lex Veldhuis ran deep in the PokerStars Spring Championship of Online Poker (SCOOP) Main Event. The PokerStars ambassador finished in 15th place for $62,620 in the prestigious $10,300 buy-in online poker tournament while on stream. But the main story here is that he set a Twitch poker streaming record on Tuesday with 58,500 viewers at once. 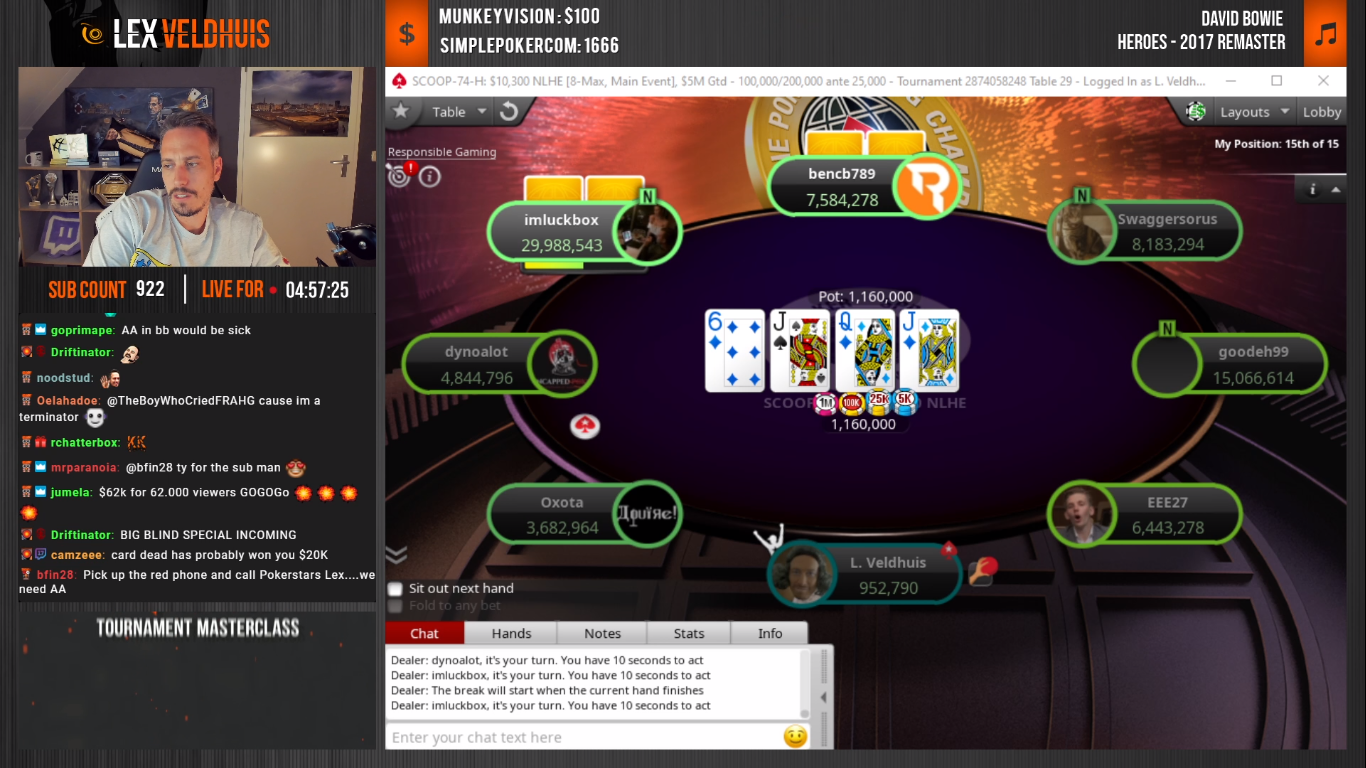 Lex Veldhuis is an absolute legend in the Twitch poker streets. (Image: Twitch/LexVeldhuis)

Veldhuis said on stream that his previous record was around 36,000 viewers at once. Tuesday’s SCOOP run was the most viewed Twitch poker stream in history. To put it his accomplishment in perspective, Phil Galfond’s final stream in the first Galfond Challenge against “VeniVidi1993” had just over 23,000 viewers at its peak. And we all raved about how many poker fans watched, yet nearly three times as many viewers watched Vedlhuis’ stream on Tuesday.

The near-SCOOP champion continued watching the finale of the tournament he busted from while on stream. Even after his bust-out, his Twitch channel still had around 10,000 viewers Tuesday afternoon.

Aside from being the most popular online poker streamer, Veldhuis is one heck of a poker player. The SCOOP Main Event is one of the most prestigious and toughest internet poker tournaments each year. Along the way, he busted some talented players, including fellow streamer Ben “Spraggy” Spragg, who also ran deep.

Spraggy was eliminated in 30th place ($40,955) when he ran into Veldhuis’ pocket rockets. The players, who are also friends, handled the situation with class.

You're such a champ mate. Thank you so much and that's the worst I've ever felt winning a hand. https://t.co/v9lRUEWnup

Veldhuis’ deep run was impressive and he scored one of his largest wins on stream ($62,620). But that pales in comparison to $1,062,966 the eventual SCOOP Main Event winner will take home.

Short-stacked and desperate for a double-up with 4.5 big blinds, Veldhuis shoved all-in with A-7 off-suit in middle-position.

Talented online pro “bencb789” then ripped it all-in from the small blind and got a snap-call from “Swaggersorus,” who woke up with pocket 10s. The board ran out 8-4-J-3-K and was shipped to “bencb789,” who was holding A-K.

“That’s it, guys. The run, the dream, it’s dead,” a dejected Veldhuis told his viewers.

The dream of winning the SCOOP Main Event may have died, but Veldhuis won a bunch of money and set an impressive record in the process.

Congratulations to Lex for this very deep run and the result , if he was a little luckier he could have succeeded going to the FT . Ofcourse this viewers record , proving how good Lex is regarded to be , how much beloved by the poker community , and also that poker has so many fans and followers , who will show up at once when they see a deep run for a very big success , which can be achieved by a super pro like Lex .
Also Spraggy had a deep run , good game , unfortunate the way he was busted . Congratuletions to him as well .
When I first show the 58k viewers I thought sth was wrong , I mean I remember 10k , a little more , but 58k ?? Are you kidding me ?? Lex was also surprised , and pleased , a real party 🙂 Also many subs (but they didn’t break the all time record) , a lot of donations and bits gifted to the champ Lex , he really deserves every single penny of it 🙂 He’s the man 🙂