The right place and right time for poker fans to get a signed copy of the new Phil Hellmuth book, “#POSITIVITY: You are Always in the Right Place at the Right Time,” will be at the Bicycle Casino in Los Angeles, Wednesday afternoon. 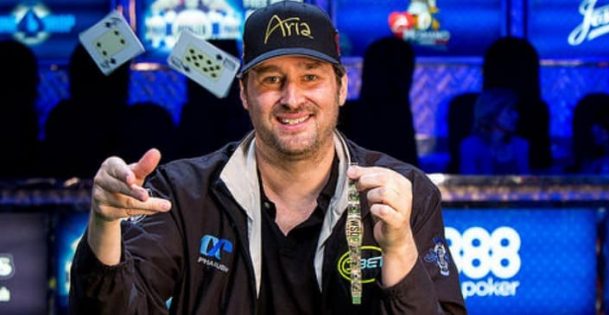 The always hustling, self-motivated Phil Hellmuth will appear on “Live at the Bike” on Jan. 31, along with Antonio Esfandiari, with copies of his latest book in tow. (Image: upswingpoker.com)

While there, Hellmuth will participate in a recording of “Live at the Bike,” the popular longtime video series of Southern California cash action.

The $50/$100 no-limit hold’em cash game will begin filming at 1 pm PT from the show’s set across from the poker room. Joining the Poker Brat at the table will be his long-time friend and rival Antonio Esfandiari. Both poker celebrities have appeared on the show in the past.

After the session concludes, at around 6 pm, Hellmuth will sit at a table to sign copies of his new book inside the casino.

The first 100 people in line will receive a free autographed copy.

Live at the Bike streams live cash games from the Bicycle Casino five days per week. The stakes range from $2/$3 to $200/$400, depending on the day. When players such as Hellmuth and Esfandiari compete, viewers should expect some massive pots.

Hellmuth’s new book, which was recently released on Amazon in paperback and Kindle form, the poker pro teaches readers how to drown out negativity and keep a positive mindset, even during trying times.

The book covers eight different strategies, one for each chapter, to stay positive at all times, which will lead to a happier and more productive life, along with becoming a better poker player.

Hellmuth, the WSOP bracelet record holder, doesn’t always seem positive at the poker table, however. His whiny behavior when suffering a bad beat is the reason he’s often referred to as the “poker brat.” But, as the saying goes, those who can’t do, teach.

If you aren’t much for reading but still want to get motivated by a 14-time poker champion, Hellmuth announced on Twitter that he is releasing a video course titled, “#POSITIVITY: How to Achieve Great Things in Life.”

Hellmuth won’t read the book to you in the video course, but he covers eight lessons learned in his book, one video per lesson. The video version of #POSITIVITY is available on Vimeo for $18.88.

How good that he writes a book, apparently he wants to become a motivational coach. I would like to read your book, hopefully soon, I wish you success in your life as a writer, since as a player he gave everything. It is ideal to lead by example, phill was an egocentric player, I identify a lot with him for his winning attitude, and not know how to lose, or at least not admit that there are bad times in poker so you play well. Seriously I would like to read the book and understand its change, it would help me a lot.