Luck, Big Bluff Keys to Another Hellmuth Win Against Negreanu

Phil Hellmuth benefited from a lucky final river card to defeat Daniel Negreanu in Round 2 of PokerGO’s High Stakes Duel. But, he put himself in a position to win thanks to a gutsy bluff moments earlier. 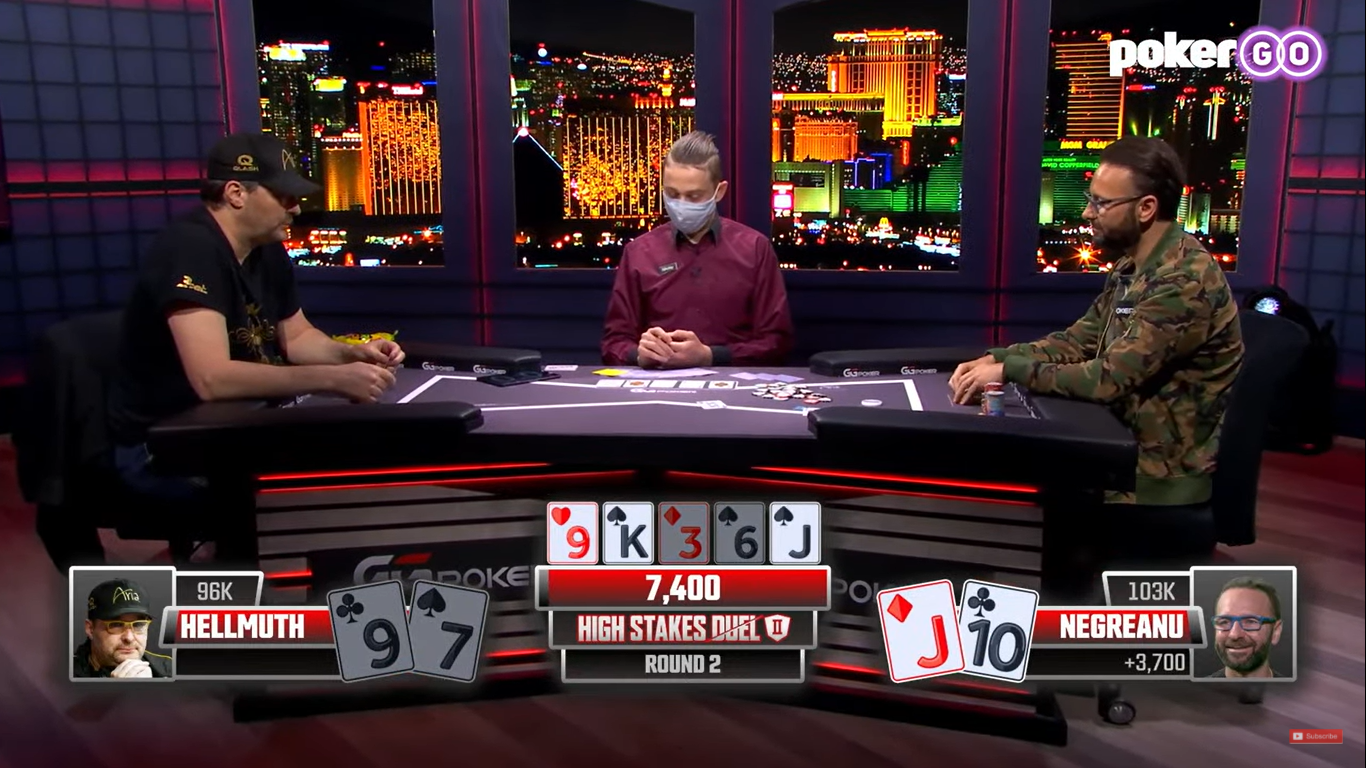 Negreanu entered the match as a heavy favorite, per PokerShares despite losing Round 1 in March. Hellmuth, however, continues to win despite getting very little respect from the high-stakes community. Part of that reason might be his refusal to adapt to modern GTO poker strategy. And part might be due to his constant whining at the table, which was on display Wednesday night for PokerGO viewers.

The rematch lasted nearly five hours with every hand shown on PokerGO and hole cards exposed, and the players traded the chip lead numerous times. Neither held a significant advantage at any point in the match, and the first and only “all-in” call of the session occurred on the final hand.

The style of play was quite different from Round 1 in that both players were more aggressive. Early on in the match, Negreanu fired numerous bluff attempts on the river only to repeatedly run into Hellmuth’s big hands. Still, the early momentum was on the GGPoker ambassador’s side thanks in large part to one key pot.

Hellmuth continued his passive preflop play throughout most of the night, though he did fire off a significant number of bluffs, many of which were successful. He also repeatedly complained after losing a pot — and even complained after a few hands he actually won.

Fortune, skill on Hellmuth’s side

Hellmuth hung tough throughout the night, never falling behind to a point of desperation. In doing so, he eventually found an opportunity to make a move with a hand that would make Doyle Brunson proud.

With 10-2 of diamonds on a board of 6-K-6-8-9 (two diamonds on the board) and 110,000 in the pot, Hellmuth jammed all-in on a stone-cold bluff — a missed flush draw — for 31,000 chips. Negreanu, with 9-7 of diamonds, was also chasing a flush draw but hit a pair on the river. He tanked for a minute before mucking his hand. Had he called, he would have won the match. Instead, he let Hellmuth’s gutsy bluff get through.

On the ensuing hand, Negreanu raised to 4,000 preflop with pocket 8’s before Hellmuth jammed all-in with A-4 off-suit (Negreanu had about 49,000 left). Negreanu couldn’t fold a decent pair heads-up and called.

The flop came out J-9-9 with two hearts (Hellmuth held the 8 of hearts). The turn was the 6 of hearts, giving Hellmuth 11 outs (J or any non-8 heart). Both players anxiously awaited the river, which was the fourth heart (K), giving Hellmuth the hand and the match.

He may have been lucky on that final hand, but Hellmuth won numerous pots throughout the night with squadoosh. The 15-time WSOP bracelet winner never would have been in a position to get lucky at the end if not for some skillful maneuvering, including pulling off the aforementioned bluff.

Hellmuth is now 5-0 on High Stakes Duel, which includes two wins over Negreanu and three against Antonio Esfandiari in 2020. If Negreanu wants a rematch, he’ll be required to pay another $200,000 to play. He has 30 days to decide if he’ll continue, and most observers expect that he will. He must win that match or Hellmuth will have a right to cash out and move on to another challenger.

hellmuth really is solid .i especially liked it when he beat out doug polk a while ago in that 4man HU format .