Antonio Esfandiari isn’t giving up on defeating his long-time nemesis, and also good buddy, Phil Hellmuth. He, like Rick Astley, just can’t give him up and won’t ever let him down. After two crushing defeats to the “Poker Brat,” the “Magician” is ready to give it another crack on the PokerGo’s “High Stakes Duel.” 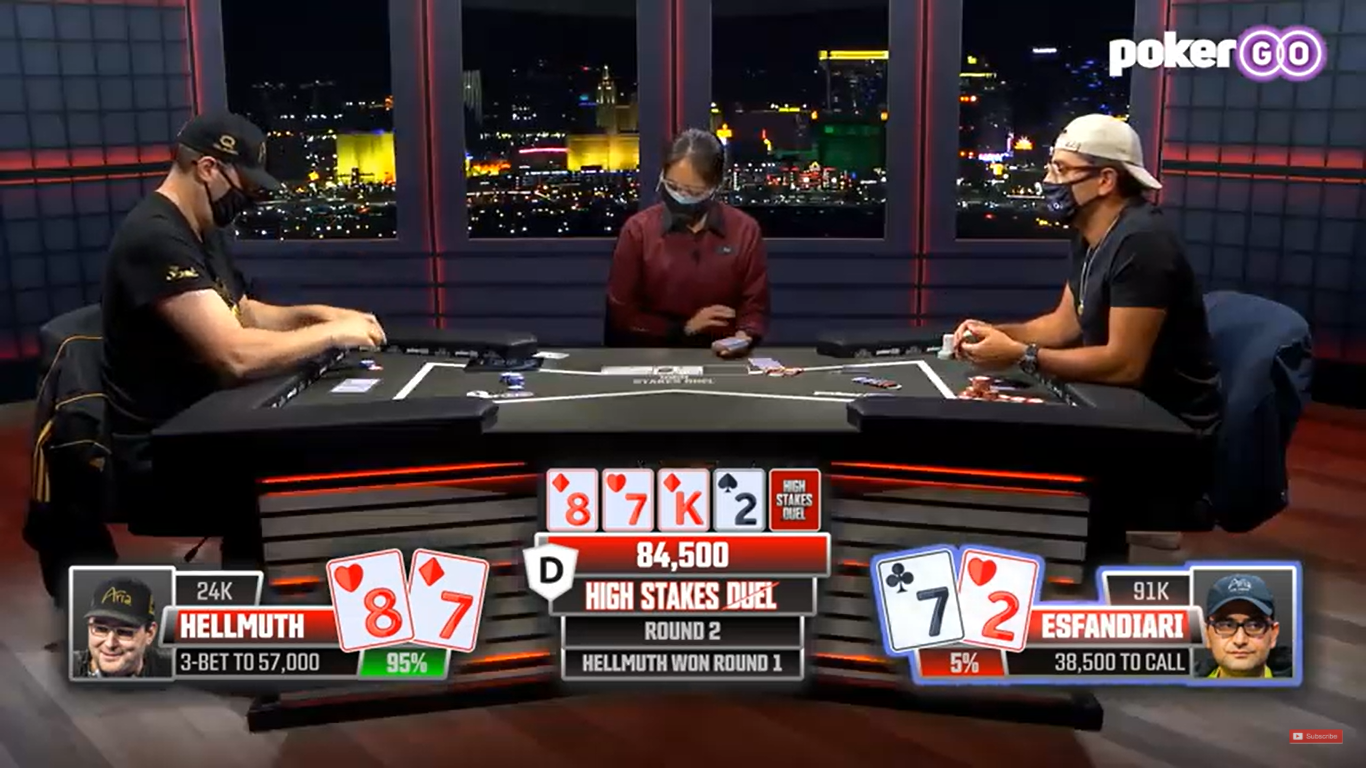 Phil Hellmuth and Antonio Esfandiari will play on. (Image: PokerGo)

Esfandiari is hoping the third time will be a charm after being dominated in the first two matches. Rules for “High Stakes Duel,” a new heads-up poker show, prevent the winner from cashing out too early. Hit-and-runs aren’t permitted unless the losing player is cool with it.

The intriguing show format requires two players to each pay $50,000 for the first match, which took place in July. That, for you non-math whizzes out there, created an initial pot of $100,000. But Hellmuth wasn’t allowed to cash out since Esfandiari challenged him to a rematch.

The rematch took place on PokerGo last month, and the 15-time bracelet winner again shipped the cheddar. In the rematch, they played for a $200,000 pot, as both players paid another $50,000 entry fee. This time, they’re going to up the ante, raise the stakes, or whatever poker term you prefer.

The third match between the poker legends will air on Oct. 21. They’ll compete at the PokerGo Studio on the Las Vegas Strip, and the buy-in for this one will cost $100,000 each, bringing the new prize pool all the way up to $400,000.

Hellmuth will have an option, should he win the third match. He can either take his money and run, and then play a different opponent. Or, he can continue proving he’s a better poker player than Esfandiari, and raise the stakes again in a fourth heads-up match.

If Esfandiari finally wins, he’ll have the option to challenge Hellmuth to yet another rematch. Dates haven’t been set for any potential future rematches.

There are other players waiting in line to get in on the action, although PokerGo hasn’t released those names. Esfandiari has shown frustration during his first two matches. He’s complained about how lucky Hellmuth has gotten in many hands.

He’s also been bluffed off the best hand in a few key pots. He also failed to maximize value on the river twice in the second match when holding the nuts against Hellmuth’s big, but lesser hand. Hellmuth made two huge laydowns during match #2, folding to large river bets with two-pair when he was up against an even bigger hand. Those impressive reads helped propel him to a rematch victory.

the math on these ‘pots’ doesn’t seem right to me . someone correct me if i am wrong or if the info was not stated accurately in the article . hellmuth wins the 1st match to go 50k ahead . now esfandiari only has to put up 50k more to win 150k back in the 2nd match ! ? thats crazy enough and a really bad wager from phil’s side of the action . now antonio can bet 100k to win 300k ? it cant be real. once again hellmuth seems to be laying 3 to 1 . if esfandiari wins it he’ll be 100k ahead ! something smells rotten to me . no sane player , however egotistical, would lay 3 to 1 in a heads up match . my conclusion : its obviously a set up for advertising , promotion , business or something along that line . hellmuth is clearly not actually funding his own buyins in any case , and i would suggest the reverse is true as well .