Phil Hellmuth pulled off some key bluffs and won a crucial race to defeat Antonio Esfandiari in the first round of PokerGo’s new heads-up show, “High Stakes Duel.” But the losing player has already called for a rematch. 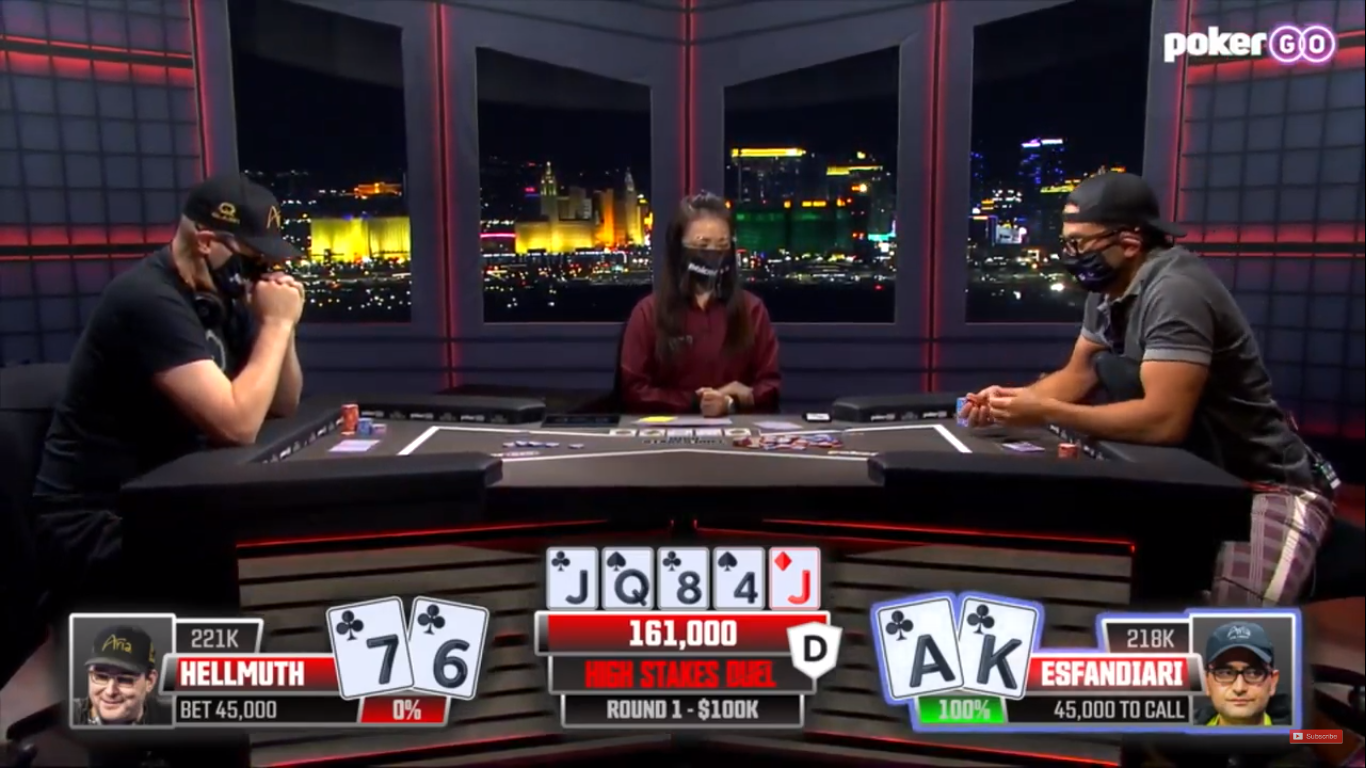 Phil Hellmuth showed he can still compete with the best. (Image: PokerGo)

The prerecorded, long-awaited match initially was scheduled to air on PokerGo Thursday evening. Technical issues forced Poker Central to postpone it until noon PT on Friday, and moved the show to its YouTube channel.

Many poker fans on social media, and PokerGo customers, expressed dissatisfaction with the poker app. They voiced their displeasure on Twitter.

Both players put up $50,000 for the initial match. Per the rules of “High Stakes Duel,” the loser has the option to challenge the winner to a rematch, increasing the prize pool from $100,000 to $200,000. So, although Hellmuth won the first game, he’ll need to win again to advance to the second round where another player, who hasn’t yet been named, will be waiting in the wings.

Hellmuth Gets Key Bluffs Through

The competitors began with 300,000 chips and the blinds started at 500-1,000, increasing every 20 minutes. Early on, Hellmuth seemed to hit every other flop, which frustrated the card dead Esfandiari. Even so, Hellmuth couldn’t seem to pull away. Instead, Esfandiari let him take down a number of small pots before taking over the match.

Two hours into play and “The Magician” had nearly a 3-1 chip advantage. He took full advantage of Hellmuth’s mistakes, punishing the “Poker Brat” repeatedly for calling down light. And with 7-5 on a K-Q-J-9 board, he bluffed Hellmuth off A-K to win a big pot.

The 15-time bracelet winner was his usual self during the match. When things weren’t going his way, he complained about how lucky Esfandiari was getting. Then, his luck and aggression turned around, and so did his attitude.

Hellmuth had shown no aggression up to that point in the hand, so his bet was a bit fishy and polarizing. If Esfandiari called and was right, Hellmuth would have been left with crumbs. But he got the bluff through and then began taking over the match.

“You have no idea how lucky you’ve been this match,” Esfandiari angrily informed his opponent.

But Hellmuth also pulled off some great bluffs, including one with 7-high. On a flop of J-Q-8 with two spades, Esfandiari bet 19,000 with A-K of spades. Hellmuth came along for the ride with 7-6 of spades.

Both players chasing a flush draw — Esfandiari also after a straight — saw an off-suit 4 on the turn. Esfandiari put out another bet, 30,000 this time and his opponent continued in the hand. When the off-suit J flipped over on the river, Hellmuth knew he either had to bluff or lose the pot. So, he fired out 45,000 and Esfandiari couldn’t find a call with the best hand.

The frustration continued for Esfandiari on the final hand. Hellmuth opened with pocket 7s and “The Magician” shipped it all in for 245,000. Both players saw the board run out 8-A-4-5-2, ending the match.

So, we’ll have a rematch, although the date has yet to be determined.