Phil Galfond will take his chances against poker pro and coach Chance Kornuth in the third edition of the Galfond Challenge. The 35,000-hand pot-limit Omaha online poker competition is set to begin Sep. 16 on the Run it Once poker site. 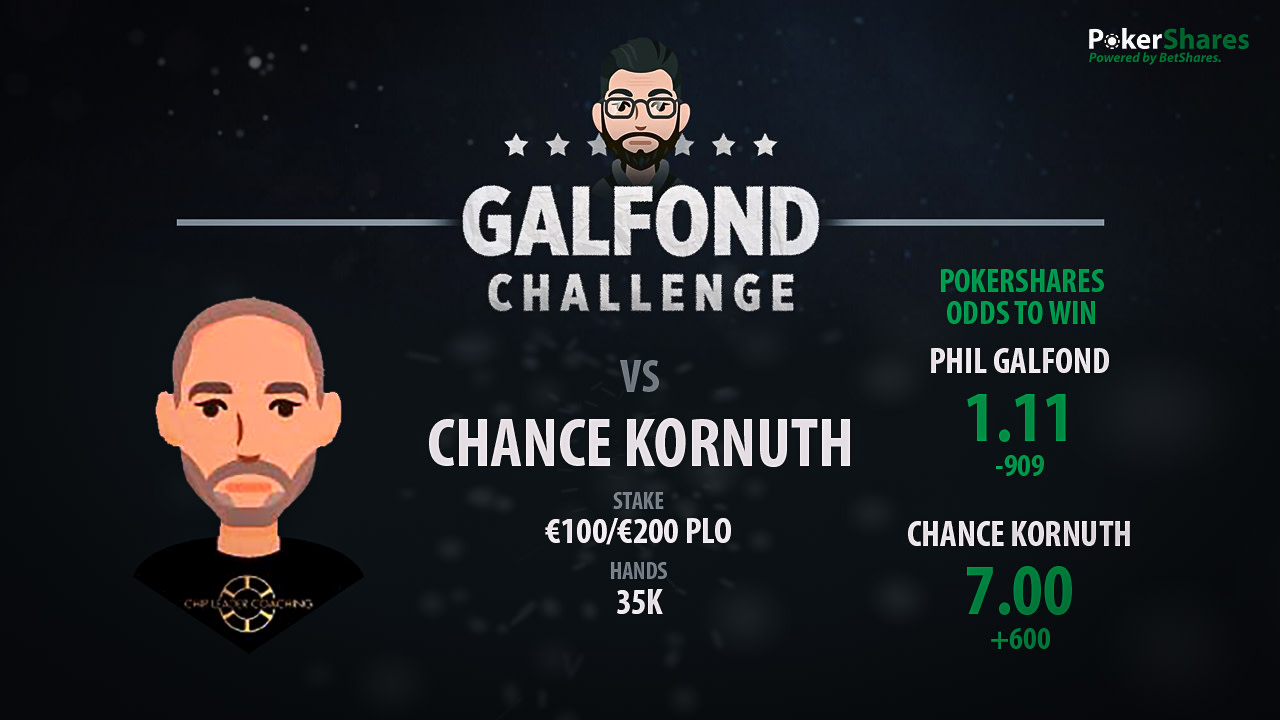 Kornuth is an underdog, but he’s an experienced online poker pro. The Chip Leader Coaching founder, per PokerShares, opened as a 7-1 dog to win the contest. But the odds quickly jumped the other way, and he’s now a 3.25-1 underdog.

Galfond is favored for a few reasons, mostly because he’s one of the best PLO players ever. On Full Tilt Poker back in the day, under the screen name “OMGClayAiken,” he won millions in the PLO nosebleed games.

Galfond is now a poker site founder, having built the up-and-coming Run it Once platform. He brings heads-up PLO challenge experience to the competition, another reason for the initial lopsided line. The poker pro won the first Galfond Challenge against “VeniVidi1993,” a tough online poker pro, earlier this year. Galfond rallied from a €900,000 deficit to squeak it out during the final session of the 20,000-hand match.

The eventual champion contemplated giving up early in the match. He considered just paying off the €150,000 side bet and to cut his losses short. Instead, he took a few weeks off to regroup before pulling off one of the greatest comebacks in poker history.

Taking his Chances in the Galfond Challenge

In the second Galfond Challenge, which concluded in late May, Galfond again won, beating online pro “ActionFreak.” But this time around, he held on to a large early lead to win instead of rallying from behind. In both challenges, the champion was paid an additional six-figure side bet for winning.

His next match, which will also be his lengthiest, is against Chance Kornuth, a heavy underdog. If Kornuth wins, Galfond owes him an additional $1 million in a side bet. Should Galfond win, as he’s favored to, Kornuth would owe him an extra $250,000.

That could lead to a seven-figure loss for one of these players given that the stakes — €100/€200 — are so high. Despite being a heavy dog, Kornuth is far from a mark at the poker table. And Galfond is far from a lock in this high-stakes battle.

The poker coach has more than $7.4 million in live tournament cashes and two WSOP bracelets. And he’s an accomplished online poker pro as well. This past summer, he came just one spot short of winning a bracelet in the WSOP.com $500 No-Limit Hold’em Turbo Deepstack event. In 2018, he took down a WSOP online bracelet for $341,599 in the $3,200 WSOP.com No-Limit Hold’em High Roller tournament.

Past accomplishments, however, won’t help win pots against Galfond. To win the Galfond Challenge, Kornuth will need to devise a game plan that outsmarts arguably the top pot-limit Omaha player ever.