Phil Galfond suffered a massive defeat on Day 19 of the Galfond Challenge against “ActionFreak,” but he only has to hold on to his lead for one more session. 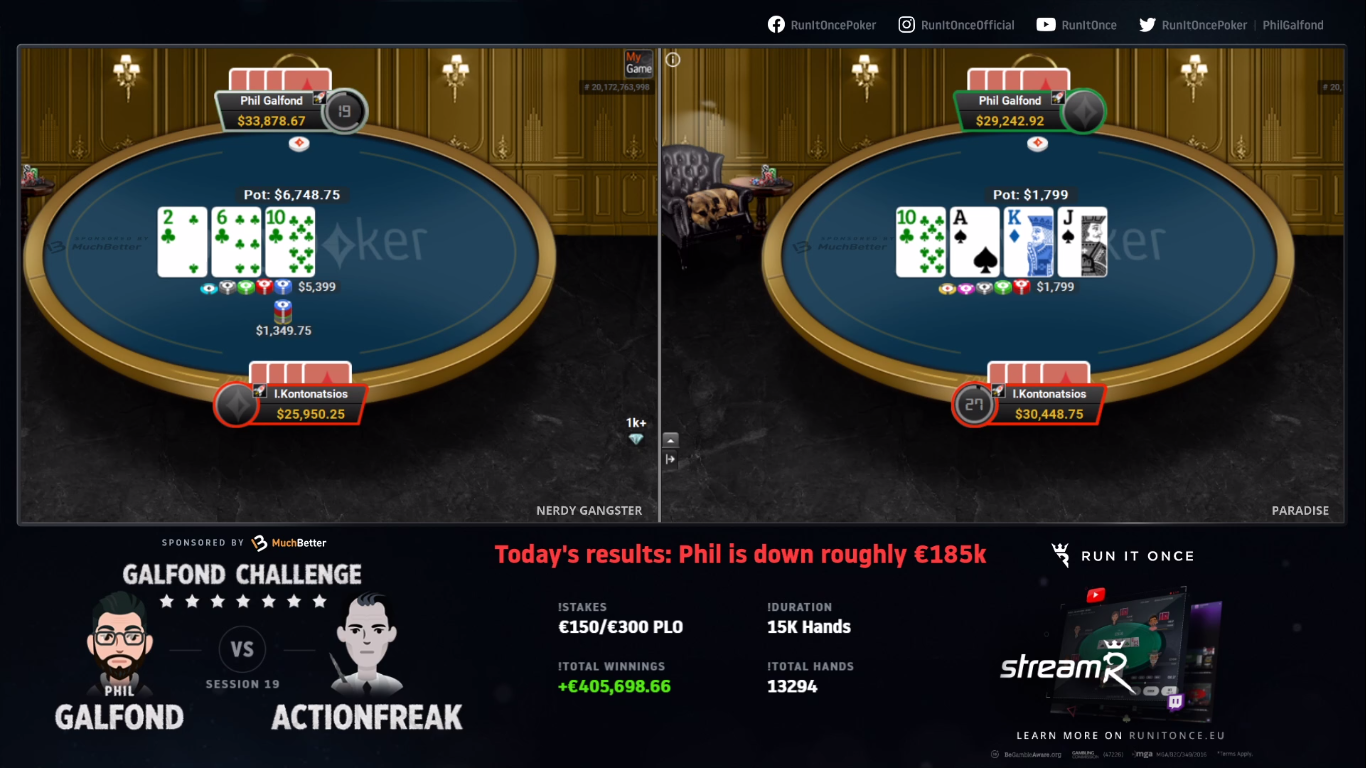 With the Galfond Challenge down to its final day, Phil Galfond is in the driver’s seat. (Image: Twitch/Run it Once Poker)

Galfond already has once challenge title to his name, having defeated “VeniVidi1993” last month. That battle was much more difficult for the Run it Once founder than is his current challenge. In that first battle, he trailed at one point by a whopping €900,000. By the time all of the required 25,000 hands were played, however, he booked a small profit.

This time around, Galfond hasn’t needed a miraculous rally to win. He never trailed by very much at any point in the match, and has led ever since he booked a €310,000 profit on Day 3 (April 30). It hasn’t been all uphill for the former Full Tilt Poker star, however. “ActionFreak” has given Galfond a run for his money, but he’s running out of time to win the challenge.

They will finish the remaining hands on Tuesday. You can watch the final session — Day 20 — in its entirety live on the Run it Once Twitch channel.

As strange as this may seem given Galfond’s six-figure advantage, “ActionFreak” has gotten the best of Galfond, for the most part, since Day 9 (May 11). Ever since the challenge moved to Partypoker from Run it Once, “ActionFreak” has turned nearly a €200,000 profit. That includes a dominating performance on Monday, resulting in a €168,000 win over 820 hands.

But he’s going to need one final day of run-good, or he’ll lose the challenge. “ActionFreak” must win the equivalent of eight full buy-ins — €30,000 per buy-in — on Tuesday or he’ll lose the Galfond Challenge and owe his opponent an additional side bet.

It won’t be easy, given he’s up against one of the best PLO players in the world. And he’ll be facing a second opponent on Day 20 — time. Should Galfond’s lead remain intact heading into the final 100 hands or so, he might be able to just fold his way to victory.

That means “ActionFreak” will be looking to push the action in the early stages of the final session.