Phil Galfond rose from the dead on Easter Sunday to defeat “VeniVidi1993” in the first Galfond Challenge. The Run it Once poker site founder capped off arguably the most improbable comeback in poker history. 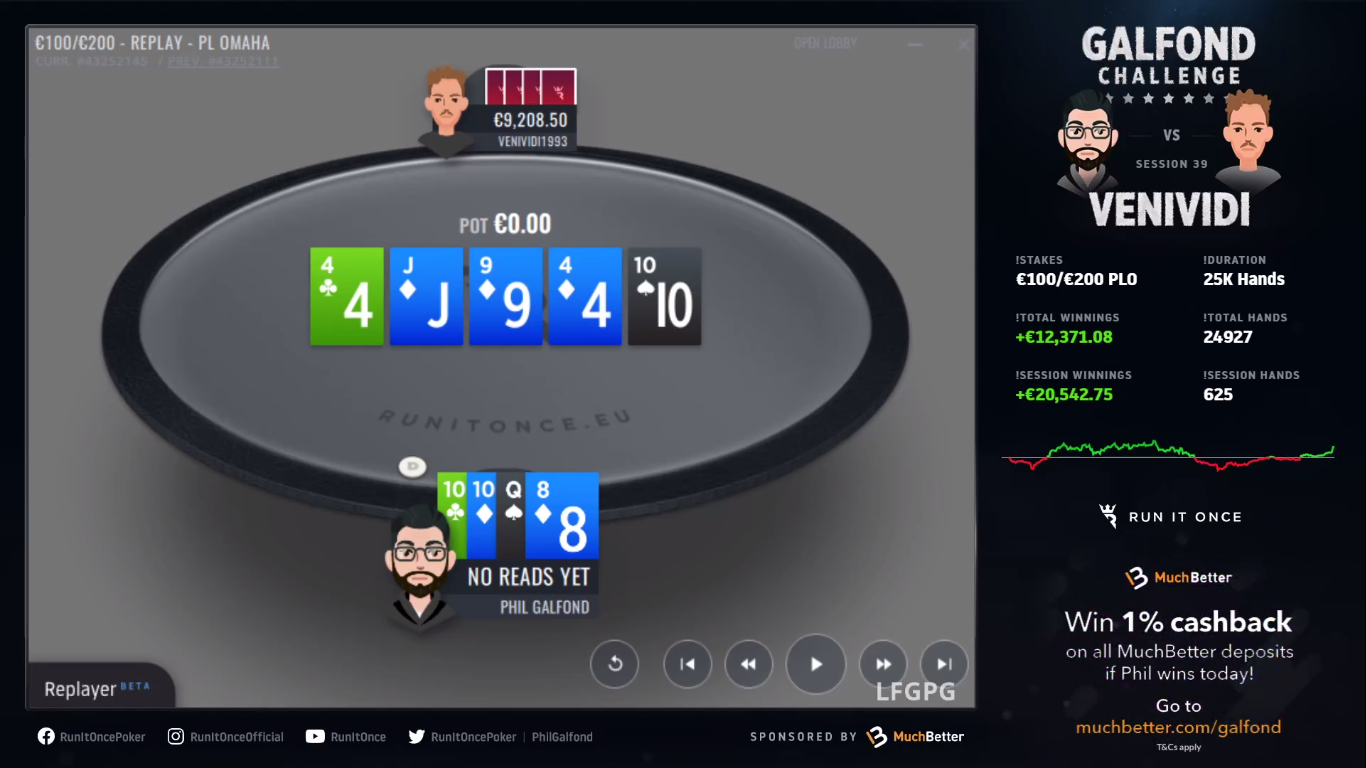 The final hand that mattered in the Galfond Challenge. (Image: Twitch/runitoncepoker)

More than 22,000 poker fans watched Sunday’s finale on Twitch. And they were treated to a thrilling, six-hour battle that saw the competitors trade jab after jab until we finally had a winner

The first Galfond Challenge had so many plot twists that “Rounders” screenwriter Brian Koppelman would be impressed. Back in February, this competition appeared to be over before it even reached the halfway point.

With Galfond down €900,000, he took a month-long break to regroup and decide if the optimal play was to continue. At that point, his fans were just hoping he could finish it out and make it look respectable. Basically, he was in the same position as the New England Patriots in Super Bowl LI, down 28-3 to the Atlanta Falcons.

The odds of Galfond rallying to win from a €900,000 deficit, albeit in a high-variance game of Pot-Limit Omaha, was about as likely as the Patriots erasing a 25-point third-quarter deficit. But like the 2016 Patriots, “OMGClayAiken” showed his fans why you should never give up until the end.

‘VeniVidi1993’ Just One Pot Away from Victory

Early, in the session, Veni took a slight lead. But then Galfond hit some hands and began taking over the match. At one point, he led by more than €15,000 overall, and it appeared he was destined for victory. That was right up until his opponent seized control of the match.

With around 135 hands remaining, Veni led by approximately €13,000. The deficit wasn’t insurmountable, but it was getting close to the point where Galfond would be in desperation mode. In fact, when the challenge crossed the 100-hands-to-go threshold, Veni was essentially one decent pot away from being able to just fold his way to victory. But then poker fans on Twitch learned about the unpredictability of Pot-Limit Omaha.

The Hand that Won the Galfond Challenge

The 4 of diamonds on the turn gave the poker site owner a flush, and he bet half-pot this time (€1,798). When Veni made the call, everyone watching knew this was a crucial hand. In fact, the pot was so big at this point that if Veni were to win it, he would have likely been able to just fold his way to victory.

The 10 landed on the river, giving Galfond a boat. After Veni checked, Galfond fired out a bet of €7,194 and his opponent called, only to lose the hand. Veni’s hand wasn’t exposed to Twitch viewers, but Galfond later said Veni had a weaker full house. That officially wrapped up the match for the Run it Once owner, who took a €12,371 lead with 73 hands left.

Galfond folded the remaining hands and ended up turning an overall profit of €1,671 after 25,000 hands. This will go down in history as arguably the greatest comeback in poker history.

Following the Galfond Challenge finale, the champion shared his thoughts about his performance with Twitch commentators Joe Ingram, Joe Stapleton, and David Tuchman. He said he didn’t bring he A-game on Sunday, but said he felt he played his B+ game, which was good enough.

Galfond said he was surprised the match was so close so late.

“I didn’t think it would get under 300 hands with it being anyone’s game.”

With a side bet and pride at stake, both players had to adjust their games late. Tuchman asked Galfond how his strategy changed late in the final session.

“Until maybe 300 hands left, my goal was to just play the best poker that I could and not necessarily do anything too crazy as an adjustment to the weird situation, other than to adjust to what I think he was doing,” he said.

Galfond trailed for the majority of the challenge. He was down at one point in February by €900,000. It wasn’t until Day 35 last week when he took his first overall lead since Day 1. But, in the end, he came out victorious, pulling off a comeback for the ages.

The PLO legend now awaits his next Galfond Challenge competitor. He said in the post-game interview that he isn’t sure when the next match will begin, but it appears Bill Perkins will be first in line.

This is really impressive comeback. It’s hard to believe that even so big gap possible to turn around and win the game. That’s why I love poker.

Wow, I seriously did not expect him to come back at all. I wonder if excitement and being near the victory took the better of Veni. I guess this is a great show of how not to give up in poker!