Phil Galfond is no longer the favorite to win the Galfond Challenge. Chance Kornuth has not only erased the $280,000 deficit he faced a couple weeks ago, he’s completely flipped the script. 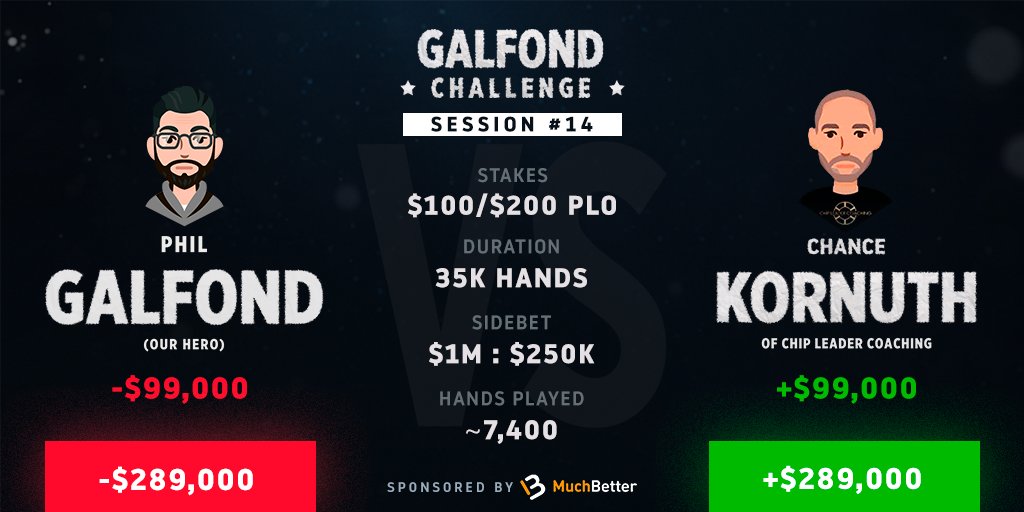 Phil Galfond has some work to do or he’ll be out more than $1 million. (Image: Twitter)

Just two weeks ago, Galfond was cruising in his third Galfond Challenge match. He was up 14 buy-ins (each buy-in is $20,000), although the contest was still in its infancy stages.

But Pot-Limit Omaha, the game they’re playing at the $100/$200 stakes on WSOP.com, is swingy, to say the least. Variance is high, even in the heads-up format. Galfond learned that, as if he hadn’t already known, in his first battle against online pro “VeniVidi1993.” In that match, he trailed at one point by more than $900,000 before pulling off one of the most memorable comebacks in poker history.

Galfond isn’t down by nearly $1 million yet in his third challenge, but he’s in a deep hole against Kornuth and will need to rally yet again.

Before the match started, Galfond gave Kornuth 4-1 odds on a $250,000 side bet, meaning he’ll be on the hook for a $1 million payout should he lose the match. Kornuth will owe $250,000 if he loses. Right now, those juicy odds have to be looking pretty sweet to Kornuth.

After nine matches, Galfond led by $280,000. He’s since been utterly dominated. Following the most recent session (Thursday), Kornuth booked a $99,000 profit, his fifth consecutive winning session. He now leads the challenge by $289,000, almost exactly the deficit he once faced.

There’s still more than enough time for Galfond to rally. He could still win (or lose) this competition by $1 million or more. As mentioned, he’s been in a similar position before and still managed to win. Only 7,400 of the 35,000 hands have been played, or about 21% of the match, so it’s far too early for either player to get too high or too low. You should expect some massive swings both ways before the third Galfond Challenge is all said and done.

Galfond and Kornuth are taking a brief break and will return to the virtual felt on WSOP.com on Tuesday.