Alleged poker cheat Mike Postle has filed a motion to dismiss the $330 million libel case he filed in November 2020 against a dozen largely deep-pocketed defendants. Postle filed the paperwork on Thursday in the Sacramento County, California Superior Court where his complaint was scheduled to be heard. 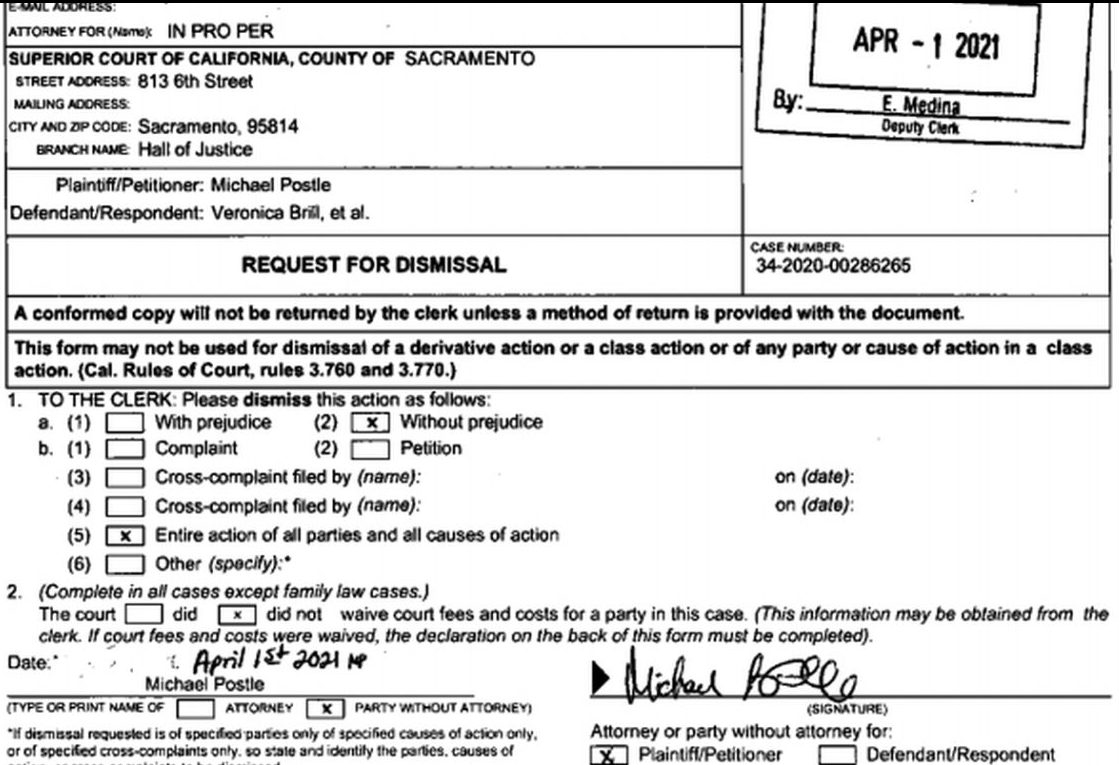 The April 1 court filing in which Mike Postle seeks a dismissal of his $330 million libel claim against a dozen defendants.

Lead defendant Veronica Brill’s attorney Marc J. Randazza posted news of Postles’s filing on Friday. Brill quickly retweeted her attorney’s posting of the Postle filing, while adding an extra note to suggest the case still many not be fully over:

Mike voluntarily dropped the case against me and many others. Now he owes me my legal fees https://t.co/FgiHko57Vp

Postle could still be on the hook for legal fees

Postle’s voluntary filing to dismiss his claims does not end the case. As Brill noted, Postle likely will be found liable for her and Witteles’ legal fees. Both of those defendants filed anti-SLAPP (Strategic Lawsuit Against Public Participation) dismissal motions, seeking to have Postle’s claims dismissed as frivolous, one of the defining characteristics of a SLAPP suit. The other 10 defendants never bothered to appear in court to defend against Postle’s libel and defamation claims, despite the massive amount of damages Postle sought.

A hearing on Brill’s and Witteles’ anti-SLAPP filings remains scheduled for April 20. If granted as filed, a scenario made much likelier by Postle’s voluntary dismissal, he would be responsible for what is probably tens of thousands of dollars in legal fees.

Postle also notable filed his dismissal motion “without prejudice,” meaning he would technically have the right to re-file the same or similar claim in the future. The defendants’ attorneys are likely to argue that in addition to awarding their clients legal fees, the case should be dismissed with prejudice, therefore barring Postle from refiling the case in the future.

Witteles’ attorney, Eric Bensamochan, told CardsChat, “While my client is pleased that the case is dismissed, this isn’t the end of the road for Mr. Postle. He dismissed the entire case without prejudice which means he could try something like this again in the future. As such, Mr. Witteles intends to seek a ruling on the Anti-SLAPP motion to ensure that he is not subjected to this in the future, and to also recover the legal fees spent up to this point, which are substantial.”

Lack of counsel a contributing factor

As Postle’s case moved forward, an apparent inability to find or hire an attorney made the damages he was seeking seem more frivolous. Postle’s original lawyer withdrew from the case, citing inadequate client communication and alleging breach of contract. Postle said the problem was that this attorney was inexperienced in online-defamation law.

Brill’s lead counsel Randazza scoffed at such a notion. “Any claim by Postle that [former Postle attorney] Steve Lowe is ‘inexperienced’ in this kind of case is ludicrous.” Randazza said. “Steve is a very well respected attorney — and quite honestly, I would have no reservations about hiring him myself.”

Postle claimed during the case’s last hearing, on March 18, that he was actively seeking legal help in a case in which he’d been representing himself since January. Postle told the judge he expected to have a new attorney, roughly within a week’s time, but that never came to pass.