If you thought the Las Vegas poker rooms that reopened this past weekend would struggle due to short-handed restrictions, you’d have been wrong. Live poker clearly isn’t dead, but some questions about the future of the game in Sin City still remain. 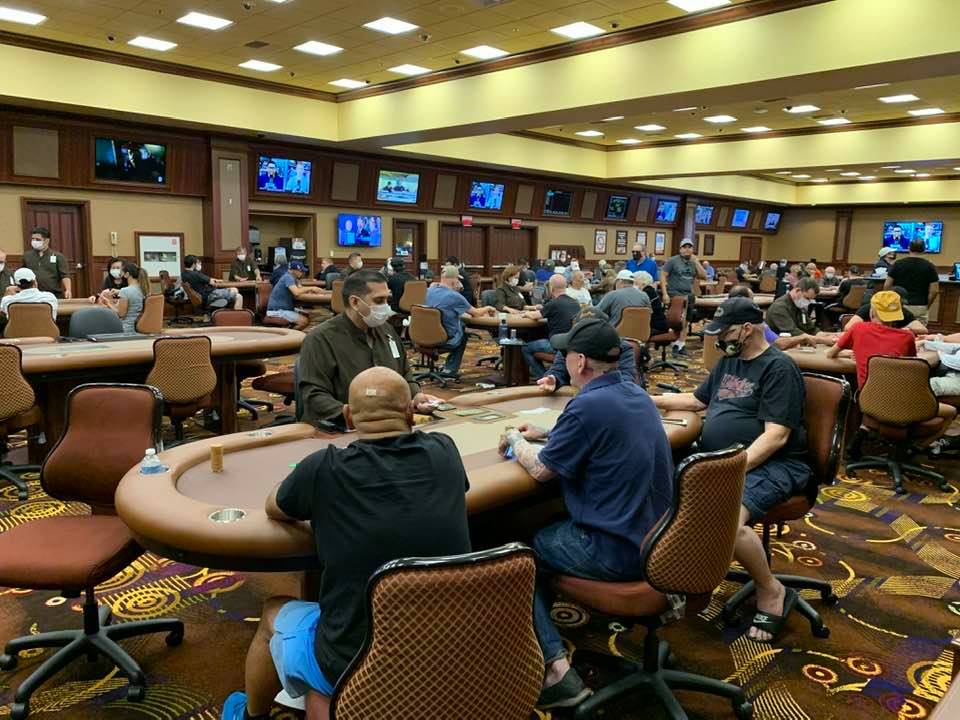 Many Las Vegas casinos reopened on Thursday, the first day they were permitted to do so. But due to the Nevada Gaming Control Board limiting poker to four-handed games, most poker rooms remained closed.

Only three card rooms in town opened by Friday — Venetian, Orleans, and South Point. Prior to reopening, it was anyone’s guess as to how busy the poker rooms would be during the first weekend.

South Point’s poker room submitted a proposal to the gaming board with plans of spreading five-handed games. Shortly prior to reopening on Thursday morning, the proposal was approved. And the newly renovated card room south of the Strip was permitted to seat five players per table.

That set off a chain reaction. Venetian, which opened its poker room on Friday, also received approval for five-handed. Orleans, which initially spread four-handed games on Thursday, followed suit and is now playing five-handed.

All three of the newly reopened Las Vegas poker rooms have been crushing it so far. On Thursday, Orleans and South Point had more than a dozen games running throughout much of the day. Venetian had similar success when it reopened on Friday.

With poker off to a strong restart in the desert, Golden Nugget reopened its downtown poker room on Saturday morning.

Challenges Ahead for Poker in Sin City

Predictions on social media of the death of live poker in the US have been greatly exaggerated. Not only did the first three Las Vegas poker rooms have a successful relaunch. Other card rooms across the country that recently reopened drew large crowds. Take the Seminole Hard Rock in Tampa that reopened May 22 to a wait list of over 100 players.

But there are still some questions to be answered and challenges that lie ahead for live poker in Las Vegas. First off, it’s unclear at this point when other card rooms will reopen. There are now four Las Vegas poker rooms in operation, but 27 others are still waiting in limbo.

Five-handed poker is more appealing than four-handed, but it’s still short-handed poker, which isn’t a popular form of live poker, especially to the recreational players. So, it’s unlikely many other card rooms will reopen until the gaming board relaxes its stringent requirements.

When the GCB permits 6-9 players per table will likely be based on the spread of COVID-19 in Nevada over the coming weeks. As of Saturday, the Silver State had over 9,400 cases of coronavirus. That’s a relatively low number compared to a state like Iowa, which has over 21,000 confirmed cases, which has nearly identical population.

But there isn’t sufficient enough data yet to determine how transmissible the virus is at the poker table. We’ll likely have answers to that concern in a few weeks. The CDC says it takes anywhere from 2-14 days between contraction and symptoms showing. And then there is some lag between positive tests and reported cases.

Do we know if Dr Fauci is a poker fan? If we can get this dope to ok 6 handed poker we should be golden!

Dope, eh? More brain power in his small toe than you’ll ever have.

You’re way out of line calling that man names he’s ahead of the NIH to save millions of lives you just cost Las Vegas some of their business talking this way…it’s obvious what kind of people are there right now and I wouldn’t return to the south point though I’ve been there before…sounds like only people with mental health problems are going there right now anybody that would call any NIH doctor a dope has something wrong with their brain!

That “dope” to which you refer I’m sure has more degrees and knowledge than you could ever imagine.

this is absolute bogus propaganda these poker rooms are not full I’ve been to South point and this is not a packed place this is relatively empty…in fact I’m going to ignore everything this website says because you actually have somebody calling doctor Fauci a world-renowned genetics expert a dope though he just saved 3 million people’s lives and he’s a genius and he’s an expert on disease… The whole world is doing the same as what he said… Yet the poker player that commented above calls him a dope? This says that people in Vegas that play poker are dope fiends and nutcases… I bet this guy doesn’t even have a science degree can’t even do math is just saying psychological stuff to pretend he can’t get sick just calling the doctor nuts is not going to prevent you from getting sick stupid… Seeing people write like this makes people not want to go to South Point…how could anybody call whomever the NIH head as a dope there is someone that’s going to be the head doctor of the NIH… What kind of mental cases frequent this site and play poker at the southpoint?! ミ●﹏☉ミ