Retired British boxer David Haye has climbed back into the ring for yet another round of poker, this time with some familiar faces in tow. 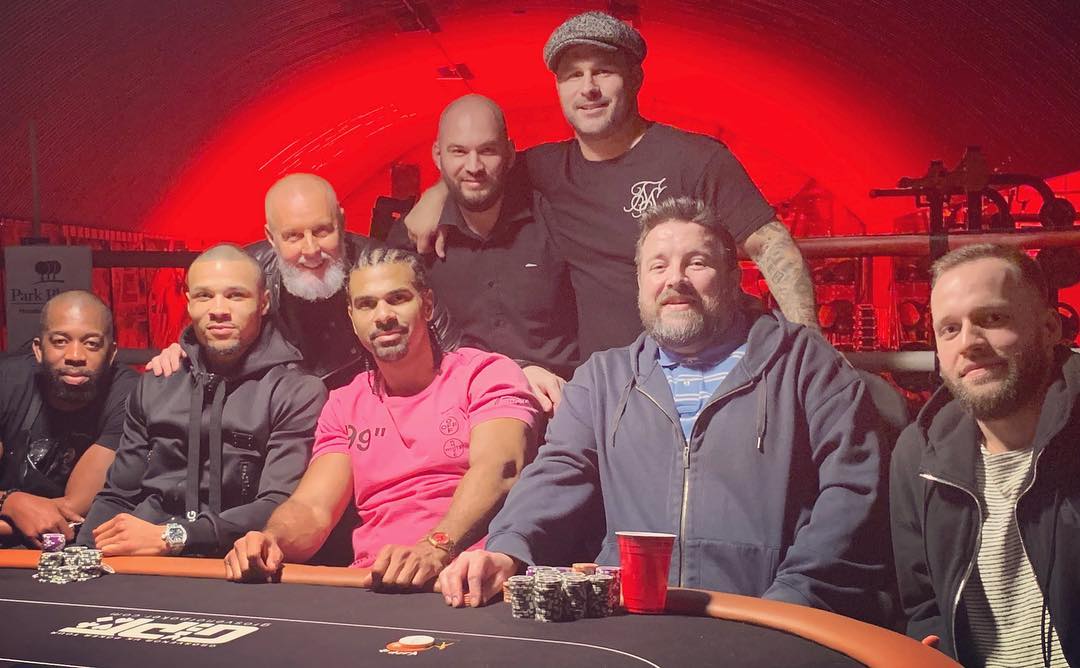 Grosvenor Casinos pro Jeff Kimber has told us that David Haye is getting better each time he antes up. (David Haye/Instagram)

In training for the 2019 GUKPT Goliath, Haye took to the felt alongside Grosvenor Casinos pro Jeff Kimber and boxing star Chris Eubank Jr. on February 28. Although it was only a £20/$26 rebuy, competition was fierce as the Hayemaker looked to impress his coach.

In an effort to get the inside scoop on the game and how Haye is progressing, we caught up with Grosvenor’s Kimber. Despite scheduling issues, the British pro feels his protégé is improving nicely.

“We’ve had about ten sessions so far and he’s definitely improving. I really feel like we had a lightbulb moment in our last session and we’re really keen to get him playing more. Obviously, his schedule is really busy and we’re always on the road playing. However, we’ve encouraged him to get in as much practice as he can, which is why he’s started a poker night at his gym,” Kimber told us.

To help their recent signing refine his skills, Grosvenor Casinos gave Haye a table which he’s put in the middle of a boxing ring. For the latest showdown, good friend and emerging middleweight Eubank Jr. joined the action, as did former soccer player Steve Watts.

Despite being the most experienced player in the game, it was actually Grosvenor pro Kimber who was the most intimidated.

“I felt under pressure as I was introduced as David’s coach, so I felt like I had to prove I knew what I was doing,” Kimber recalled.

However, the pressure didn’t appear to weigh too heavily on the Brit as he found a way to take out Haye and teach him a valuable lesson in bet sizing.

“I defended 5-3 off suit to [Haye’s] raise, mainly because I was going to bluff him if I didn’t hit and show him he made a mistake by raising too small from the small blind. Fortunately, I made a full house, so I didn’t need to bluff him in the end,” explained Kimber.

Haye will have the opportunity to put that lesson on bet sizing into practice when he takes centerstage at the GUKPT Goliath in July. The largest live poker event outside of the World Series of Poker (WSOP), the Goliath is always one of the busiest tournaments in Europe.

For Haye to perform a similar feat, he’ll need to perform better than he did in November 2018’s GUKPT Blackpool. Despite words of advice from his coaches, Haye was knocked out of a side event within three hands.

A subsequent outing in London saw the former cruiserweight champion exit just before the end of Day 1. However, since then he’s been using his home game to practice away from the glare of the media.

According to Kimber, the games are actually a lot tougher than many would expect. In his opinion, the secret weapon in Haye’s training could be Eubank Jr.

“Someone actually told me that Eubank Jr. has been playing a lot in the Vic, London. He sits in the $3/$6 game and the scouting report is that he’s far from a value spot. From our game, he definitely knows what he’s doing. He’s been playing PLO cash games as high as $15/$30 and he’s starting to frequent a few games in Vegas,” Kimber said.

Haye’s transition from heavy-hitter in the ring to knockout artist at the poker table is far from complete. However, the evidence suggests he’s taking things seriously and will come out swinging when the GUKPT Goliath gets underway in the summer.