More than 700,000 people, including poker pro Charlie Carrel, have joined Joe Rogan on Gettr amid concerns that Twitter is censoring free speech. 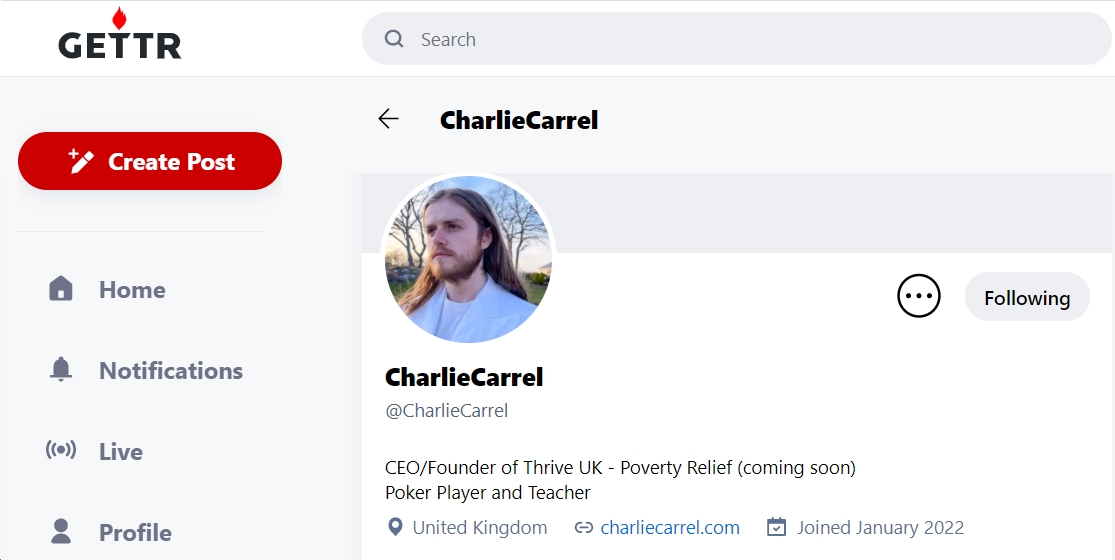 A comedian, podcaster, and UFC broadcaster, Rogan, told his 7.9 million Twitter followers to join him on Gettr. His Jan. 2 post received more than 53,000 likes and sparked a mass migration to the self-styled free speech social media platform that bills itself as “a brand new social media platform founded on the principles of free speech, independent thought, and rejecting political censorship and ‘cancel culture.’”

Among those who created accounts this week are poker players Charlie Carrel and Steven van Zadelhoff. Both pros have been vocal in their dislike of COVID restrictions, most notably Carrel, who drew the ire of the poker community with a tweet on Jan. 3.

I made it to Amsterdam, my connection stop, but their strict Covid mask rules meant that I couldn't make it on the flight.

I spent 5 hours in free fall, close to being detained a couple of times, but had a tonne of fun.

Carrel has long been critical of the restrictions brought in to tackle COVID-19. His Jan. 3 tweet featured a maskless airport picture with the caption: “I am not participating in the #MassPsychosis.” The tweet elicited a number of negative responses, including comments from poker pro Max Silver and Partypoker Live President John Duthie.

The EPT, WPT, and Triton champion remains active on Twitter but, like many others, Carrel’s created an account on Gettr. He says the move was prompted by Twitter’s alleged censorship of information.

“Join me on Gettr, the new Twitter that doesn’t ban people for disagreeing with corporate giants,” Carrel tweeted on Jan. 2.

Gettr was founded six months ago by former Trump aide Jason Miller, who now serves as its CEO. The platform supposedly is for everyone, but has drawn followers primarily from the political right.

Carrel’s latest allegations of censorship relate to Dr. Robert Malone. The man behind mRNA vaccine technology was removed from Twitter in December for his views on COVID-19. He subsequently appeared on Rogan’s podcast to clarify his position. Despite being vaccinated and offering what he believes are valid criticisms regarding the pandemic, his account was closed for what Twitter labeled as misinformation that violated their Terms of Service.

That was a major reason for Rogan making the switch to Gettr and, in turn, poker players like Carrel following him to the site.

Robert Malone has risked his reputation and career to serve the public interest. “Public health authorities” by contrast, have sold us out to Big Pharma at every turn. By suspending @RWMaloneMD, Twitter is declaring war on the public and the scientific process.#RestoreMaloneNow https://t.co/5SuQ2AI9IO

Given that other poker pros have been outspoken on topics such as COVID, censorship, and tech companies, we may see more move to Gettr in the coming weeks. While neither has posted anything yet, Doug Polk and Kristen Bicknell are among those who have established accounts on Gettr.

For context, Twitter remains the larger platform. It currently has more than 185 million users, while Gettr, which launched in July 2021, has almost 4 million. While it may never become the social media giant Twitter is, Gettr is for now, at least, in vogue, which could help make it the next playground for poker players with potentially unpopular opinions.