PokerStars’ 2017 Spring Championship of Online Poker (SCOOP) came to an end on Tuesday after Charlie Carrel, who plays under the moniker“Epiphany77,” topped a field of 693 entries to win SCOOP-55-H $10,300 NLHE Main Event for $1,200,899.97 after a heads-up deal with 2010 PokerStars Caribbean Adventure champ Harrison “gibler321” Gimbel. 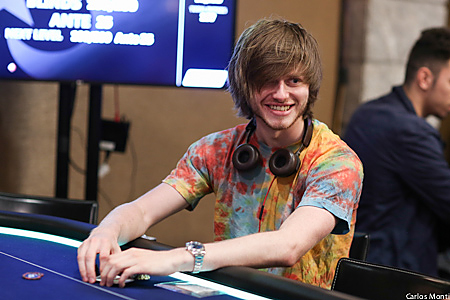 It was also the second seven-figure score for Carrel so far this year after he finished runner-up to Jason Koon in the 2017 PokerStars Championship Bahamas $100,000 Super High Roller for $1,191,900.

Once down to the final table of nine, Day 2 came to a halt with Carrel as the short stack. The following day, Carrel’s come-from-behind win got off to an inauspicious start.

“So, there was a power cut in a bunch of [Mexico],” Carrel wrote on Facebook. “The power came back 40 minutes before the start of Day 3 of the SCOOP Main… everywhere apart from our apartment. So [we power walked] … to find a café with good internet.”

Reports indicate Carrel found a Mexican Starbucks to play at, and it was there he set about making a comeback.

Charlie Carrel, who was previously featured on the UK television show Hw’d You Get So Rich?, grinded the short stack as many of his opponents fell by the wayside.

With five players remaining, Carrel doubled twice to get back into the thick of it, and that is when he dispatched online legend Ola “Odd_Oddsen” Amundsgard.

It happened when Amundsgard got his stack in holding the J♥10♥ against Carrel’s A♣9♣. The board ran out 5♥K♣Q♦2♥K♠, Amundsgard was gone, and before long Carrel held the chip lead. Still, it was Gimbel who scored the next two knockouts to take a slight lead into heads-up play.

In the final hand, Gimbel got his last 10 big blinds in preflop holding the K♥9♦ against Carrel’s J♣8♣. The 10♥A♦5♠ flop kept Gimbel in the lead, but he lost it after the J♦ appeared on the turn. The 5♦ river was of no consequence and Carrel captured the title.