Sweden’s WhatIfGod is the latest European Poker Tour champion and $1 million better off after making history in the $5,200 main event. 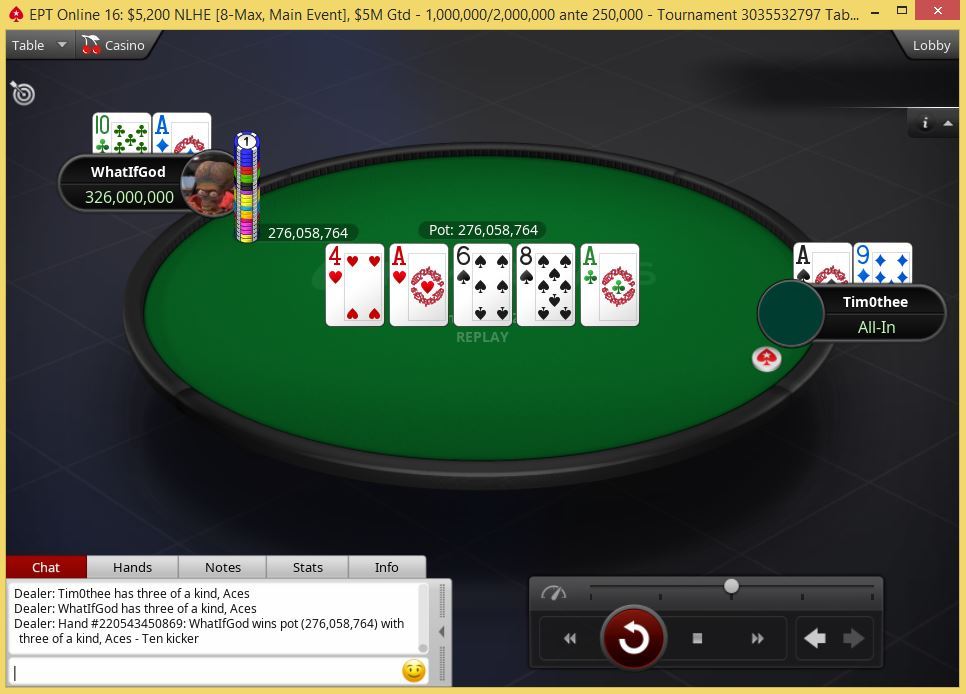 Although the Swede joins a list of EPT main event winners that stretches back to 2004, he stands as the first-ever online champion.

WhatIfGod earned the victory by defeating some tough opponents on Wednesday night, including Jon Van Fleet and Canada’s Timothy Adams.

Leading the way on Wednesday was tikidiii. The Finnish pro had just over a million more chips than WhatIfGod, but couldn’t maintain his position at the top. As seasoned veterans Adams and Van Fleet pushed the pace, tikidiii began faltering. With chips flying in all directions, something had to give — that was vip25459, who became the first player out.

The Kazakhstani moved all-in with K♦ J♦ over the top of a raise from Van Fleet. In any other situation, the move may have won the pot uncontested.

In this situation, however, Van Fleet had aces and called. The board provided little help for vip25459 and, with that, he was out. His $78,796 payday provided some solace, however, and was a huge return on the $22 he spent to qualify for the EPT Online Main Event.

Next on the chopping block was Van Fleet, who finished on the wrong side of a coinflip. At this point in the finale, David Yan looked on course to take control.

The New Zealander got it in behind against Andreas Christoforou and Enio Bozzano, but came out top both times. The first hand saw Yan’s A♣ K♣ beat Christoforou’s pocket aces, before his queens dethroned Bozzano’s pocket kings.

Those eliminations took the final table down to five, but Yan was on borrowed time. With WhatIfGod racing to a commanding chip lead, Buldygin fell in fifth before tikidiii followed in fourth.

At this point it was anyone’s contest, but Yan eventually got a taste of his own medicine. Committing his stack with pocket 10s, he was sent to the rail in third after Adams’ A♣ 4♠ caught an ace on the river.

WhatIfGod held a slight chip lead over Adams heads-up and things quickly came to a head with the board showing A♥ 6♠ 4♥ 8♠ A♣.

A flurry of bets and raises forced Adams to move all-in with A♠ 9♦. WhatIfGod called with A♦ T♣ and scooped the pot with a better kicker.

That brought the EPT Online Main Event to an end and made WhatIfGod the inaugural champion. In addition to the $1 million prize, the Swede now has an EPT trophy to go along with two WCOOP titles.