The EPT Online Main Event beat its guarantee by more than $1.5 million after attracting more than 1,300 entries. (Image: PokerStars)

Fintan Hand led at the start of play, but couldn’t keep up his momentum. When the chips fell, the Irishman picked up $11,757 for his 134th place finish while Toby Joyce went on to take the chip lead.

Play resumes today with 72 players vying for a share of the $6.52 million prize pool. Joyce will start with a comfortable lead over Viacheslav Buldygin, but he’s far from safe at the top.

PokerStars Ambassador Roman Colillas maintained his Day 1 momentum, although he couldn’t stay among the top 10. He returns with almost 3 million chips, but needs a double up to get back in contention.

The familiar avatars of Andreas Christoforou and Liviu Ignat will also be on display when the penultimate session gets underway. 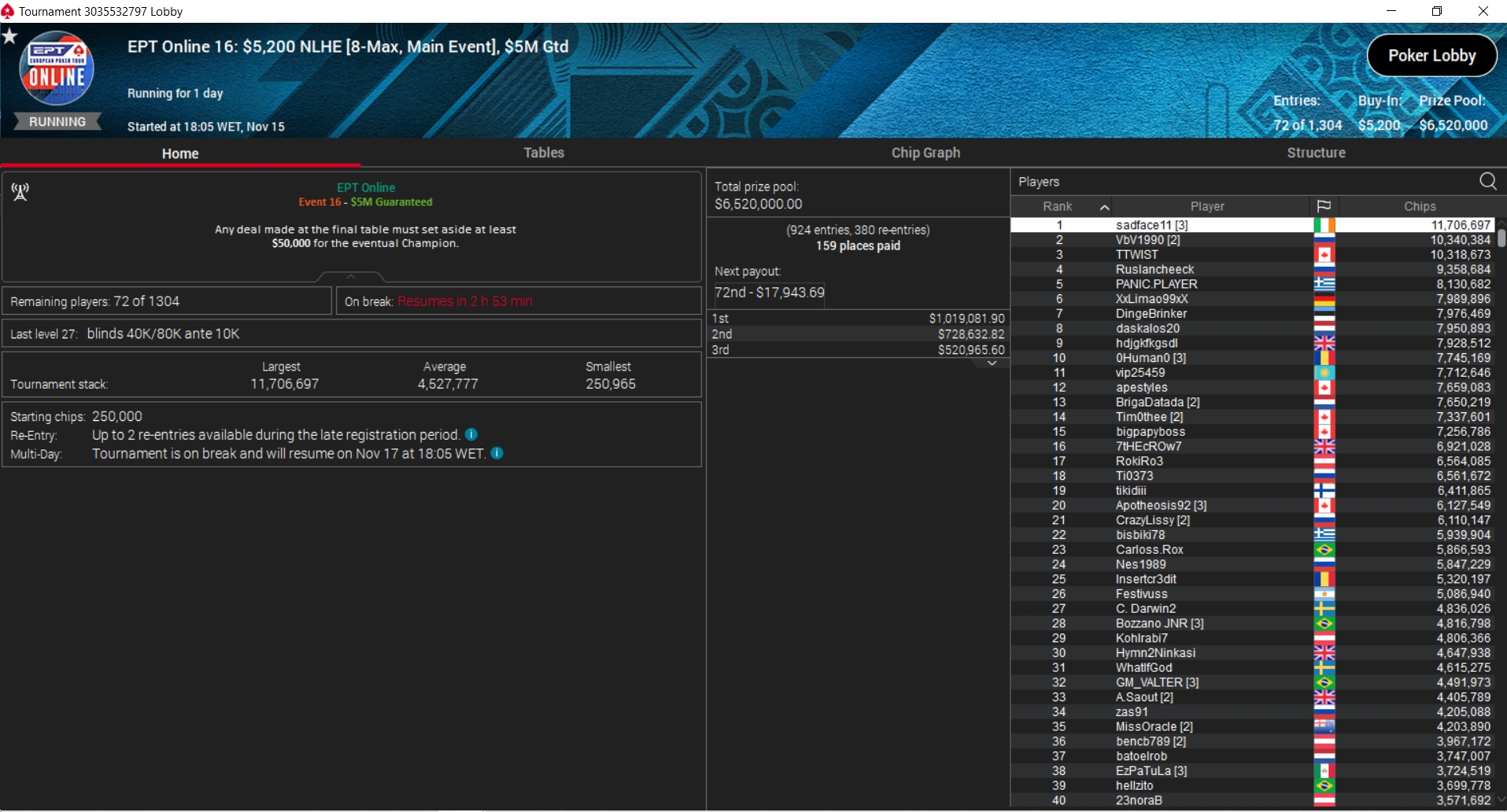 The standings ahead of Day 3 in the EPT Online main event.

Everyone who’s left in the mix will be eyeing up the $1 million top prize. However, that money will remain locked away until Nov. 18. The plan is to play down from 72 to nine today before the Main Event will pause.

When the action resumes on Wednesday, those left will be playing for an EPT title, while everyone else will be watching from the rail.

As it’s done throughout the series, PokerStars is hosting a cards-up live stream of the finale. The stream will cover the major hands and add a sense of authenticity to the virtual event (see a replay of Day 2 below).

Along with the WSOP and WPT, PokerStars pioneered tournament live streams a few years ago. Giving railbirds the chance to watch EPT events in real-time helped the tour grow, and they’re now seen as a staple fixture of every series.

Although EPT Online doesn’t have quite the same feel as a live event in a plush European casino, it’s been a success in its own right. Guarantees have been broken across the board and the addition of live streams has made it feel more like a major series.

When the EPT Online Main Event final table plays out on Monday, fans can watch via PokerStars’ Twitch and YouTube channels from 13:30 ET/18:30 GMT/19:30 CET.