Daniel Negreanu booked a massive winning session on Friday, more than erasing the $298,000 loss he accumulated two days earlier. He’s now back within striking distance against Doug Polk … kind of, sort of. 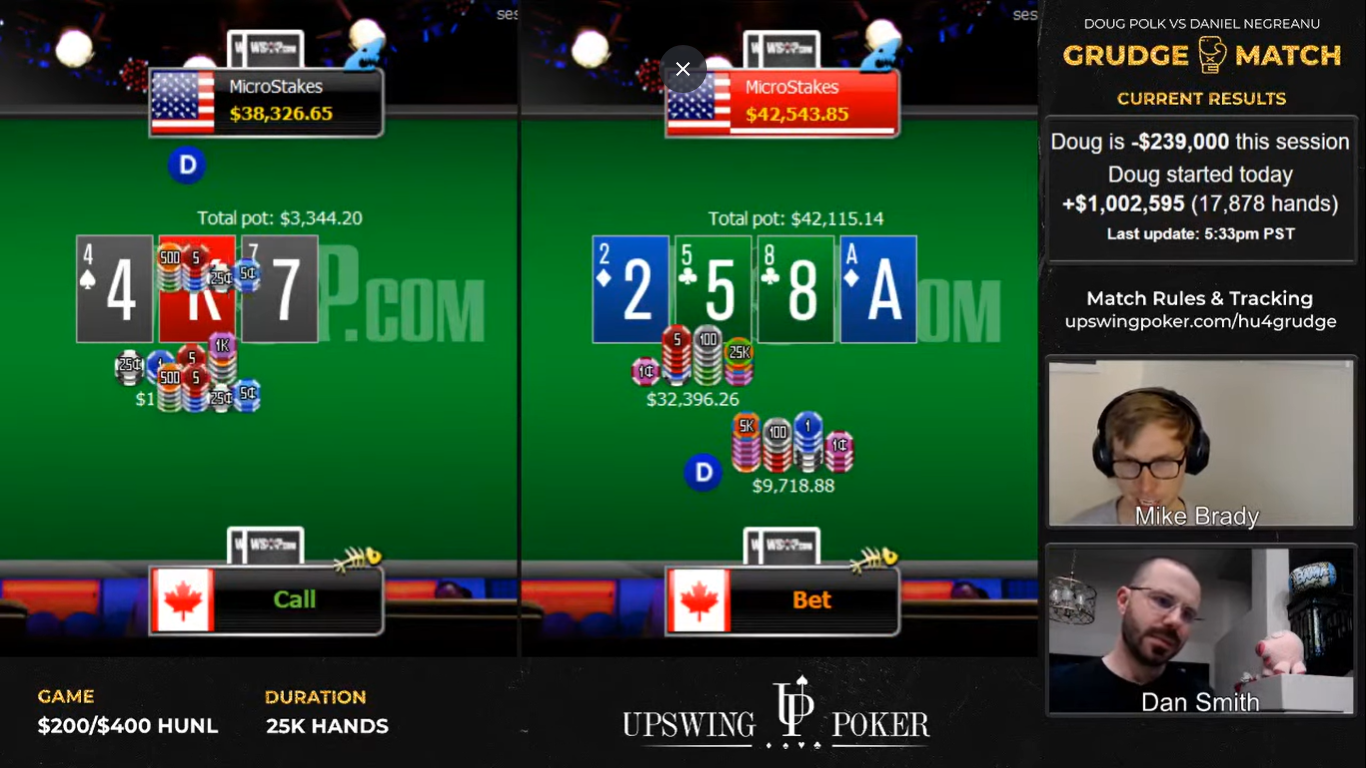 What a difference a day makes. The GGPoker ambassador took it on the chin Wednesday. He lost the equivalent of a median-valued Las Vegas home in just four hours of play. That brought his overall deficit to a bit over the $1 million mark for the first time.

Day 30 was brutal for Negreanu, who seemed a bit humbled afterward. He didn’t complain about running bad for a change. Instead, he owned up to it and admitted his opponent simply outplayed him. There was no need for the Poker Hall of Famer to cry about bad luck or tip his cap to the other player on Friday, not after he booked a $390,032 win over 1,046 hands. His lead on the session reached $430,000 at one point before Polk grabbed a few chips back late.

The win was far and away the biggest for either player through 31 sessions. Polk’s largest victory came on Day 12 when he turned a $332,178 profit in 684 hands. Following that rough outing, Negreanu had to head over to the casino cage in Las Vegas to add to his initial $1 million deposit on the WSOP.com poker site as his account balance was running low.

After Wednesday’s session, he almost had to make another deposit. Polk nearly cleaned him out again, so it must have felt good to bounce back in a big way on Day 31.

Before this challenge began in October, Polk had no interest in playing poker for quite some time. He’d retired from the game a couple years ago and hadn’t played heads-up online games in a few years. Following the brutal session on Friday, he admitted he can’t wait for this challenge to end.

He then said he had the same thoughts following his $300,000 win two days prior. The Upswing Poker founder has just 6,076 more hands to complete against Negreanu before he can ride off into the sunset and retire from poker — again.

Day 31 was as lopsided as the final score indicates. As much as Polk outplayed Negreanu on Day 30, Negreanu was the dominant one on Friday, and not only because he hit some lucky cards. There was one major difference between how the dominant performances, however.

Polk won much of his profit on Wednesday by repeatedly forcing Negreanu off hands on the river with large-sized bets, whereas Negreanu won his stack by getting maximum value on his decent hands on Day 31; oftentimes because Polk called him down semi-light with a bluff-catching type hand.

The bad news for Negreanu is that despite the ginormous win, he still trails by more than $600,000 (approximately 15 buy-ins). He’s now back to a point where he can fantasize about winning this challenge again, but he’ll need a few more heaters to come all the way back against one of the top heads-up No-Limit Hold’em players ever.